Irish-born playwright Ronan Noone has made a local home, and his American trilogy is proof 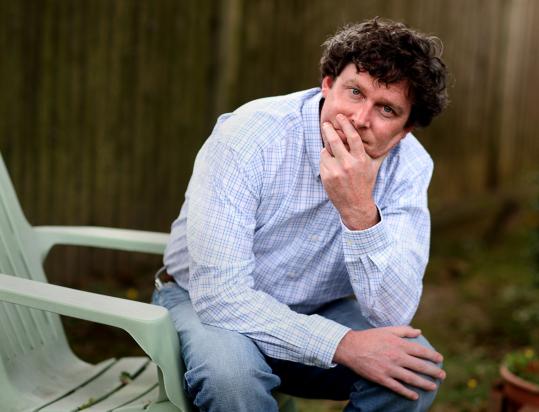 Ronan Noone is, by nature, something of a wise guy. But when he suggested we meet in an Irish pub, it was not some ironic attempt at deconstructing stereotypes, something he does with great regularity in his writing.

It’s just that he really, really wanted - nay, needed - to get out of the house and have a jar.

“I haven’t slept much since the baby was born,’’ he says, settling onto a stool at The Snug in Hingham, holding up a single index finger that Raymond the barman recognizes as the universal, wordless language for “a Guinness, please.’’

Bridget Noone arrived in this world on Sept. 18, joining sister Molly, who is 4 going on 40.

“Today,’’ says Noone, a boyish-looking 39 with tousled hair and a laconic grin, “I had the baby sleeping on my chest and it’s 4 in the morning, and I’m thinking, ‘This should be an interesting day.’ ’’

They’re all interesting lately. Besides the running-on-fumes routine that comes with a newborn, Noone’s latest play, “Little Black Dress,’’ premieres Oct. 1 at Boston Playwrights’ Theatre, where he learned his craft and where he now teaches. It’s the third play in his American trilogy, which follows a trilogy of plays set in his native Ireland.

One work from the Irish trilogy, “The Blowin of Baile Gall,’’ won an Elliot Norton Award for outstanding new play, while one from the American trilogy, “The Atheist,’’ starring Campbell Scott, played off-Broadway last year to great acclaim.

“Little Black Dress’’ returns to the Kansas that gave us Augustine Early, the sleazy but disturbingly appealing protagonist of “The Atheist.’’ It deconstructs the rustic stereotype of the American heartland, telling the story of two ambitious Midwestern kids who become gigolos, servicing housewives whose lives are as flat as the plains. It’s an outrageous satire about the outrageous pursuit of happiness.

Ari Edelson, who is directing “Little Black Dress,’’ says it is a foray into something not easily mastered: black comedy.

“I’m very biased. I think Ronan is one of the top five playwrights living and working in this country right now,’’ Edelson says. “He tells an American story in an Irish way, without the sentimental accoutrements. His characters don’t beg to be forgiven, and that’s what makes them more interesting.’’

Directors especially like Noone because he does not treat his scripts as having been cast in stone.

“He’s wonderful with language,’’ says Carmel O’Reilly, artistic director of the Súgán Theatre Company, which staged the first professional productions of Noone’s plays in Boston. (Súgán has recently been on hiatus.) “He has an obvious love of language, and he has the ability to be never entirely happy with his scripts, so he is forever tinkering with them, even when everybody else thinks they’re great.’’

If Noone’s fascination and dexterity with words is peculiarly Irish, his improbable rise from immigrant bartender to one of his adopted country’s best young playwrights is undeniably American. He occupies that space, the hyphen, between Irish and American, mining the inherent contradictions of those two, often clashing cultures for laughs and pathos.

He grew up in Clifden, the biggest town in Connemara, the rocky, wild region of Galway. That, in itself, is a contradiction, because there is nothing especially big about Clifden, where many of the locals cast a cold eye on ambition.

Even as a child, he liked to write. The nuns would show him off, nudging him to read his poems aloud. When he was 15, the Druid Theatre brought Tom Murphy’s “Conversations on a Homecoming’’ to Clifden Town Hall. The opening line contained the word “bollix,’’ slang for testicles, and his eyes widened at hearing such open subversion. The parish priest got up and left. No one else did.

“It appealed to the contrarian in me,’’ Noone recalls. “I wanted to write something that would make the canon walk out and everybody else stay.’’

Still, he thought an artistic life was something for others, so he set his eyes on journalism. A professor who read his stuff looked at him and said, “You’re deconstructive.’’

“He did me a favor, really,’’ he says. “He said I was too flowery and lyrical for journalism.’’

Still, a man’s got to eat, so he tried his hand at a newspaper in the west of Ireland. He was bored, but before he could quit, he got laid off.

“I was walking the streets of Galway and there was a fellow begging, and when I told him I’d just lost my job he put his hand on my shoulder and said, ‘I’m sorry for your troubles,’ and I’m thinking, if homeless people are pitying me, I’ve got to get out of here.’’

He went to Prague because, well, because when you’re 23 and broke, Prague sounds pretty good. He wasn’t there long when his father called and said that for two quid, the St. Vincent de Paul Society would sponsor him for a green card in America. Inexplicably, he got the green card. More inexplicably, he moved to Martha’s Vineyard. It was 1994, he was 24 years old, and he got a job at The Wharf, a bar in Edgartown. He was the quintessential culchie, an Irish hick, wearing brown corduroy pants in July. But when the tourists left, he fit in with the other misfits.

“Martha’s Vineyard was like Ireland, particularly in the winter. The isolation. The way people talk their way through the winters,’’ he says.

Listening to his customers, construction workers and fishermen, he learned how to speak American.

“In Ireland, in any country outside America, you think Americans talk like they talk on TV. But they don’t. Americans speak much more lyrically, much more musically, than they do on TV.’’

After tending bar, he would go home and work on a play about sexual abuse by priests. He was ahead of his time. He based his script not on news reports, which came years later, but on whispers and stories and rumors and furtive glances back in Clifden. “The Lepers of Baile Baiste’’ was as much about the complicity of ordinary people as it was about abusive priests and enabling bishops.

After four years on the Vineyard, he did two things that would alter his life dramatically: He applied for US citizenship, and he enrolled at Boston University’s playwriting school. He did a reading of “Lepers,’’ and Derek Walcott liked it and invited him to join his poetry class. He followed “Lepers’’ with “The Blowin of Baile Gall,’’ which focused on the native Irish resentment of outsiders, and “Gigolo Confessions of Baile Breag.’’ In Irish, Baile Breag translates to “town of lies,’’ and the play is about people lying to one another and themselves.

If his first trilogy focuses on the small-mindedness and suffocating isolation of Irish village life, the American trilogy offers a more hopeful view, even when the characters, like tabloid journalist Augustine Early, are not especially nice people. In “Brendan,’’ perhaps his best and most critically acclaimed play, an Irish immigrant negotiates his way through Boston and grief over his mother’s death. Brendan could just as easily be Costa Rican or Filipino. Unlike the Irish trilogy, the American-based plays are ultimately optimistic. It isn’t coincidence. It’s Noone’s experience.

It irks Noone slightly that his plays have been staged in Boston, New York, Washington, Los Angeles, Chicago, and London but never in Ireland.

“Maybe I’m not good enough,’’ he says. “Tom Murphy says you’re not a playwright until you’ve got 15 years in. I’ve only got eight, so I’m still learning.’’

There is a long tradition in Ireland of snubbing native-born playwrights until they’ve made it somewhere else. It happened to Murphy, who was the toast of London before anyone in Dublin noticed. It happened to Conor McPherson, who conquered Broadway and the West End first. It happened to Gary Mitchell, whose plays about the Protestant working class of Northern Ireland were celebrated in the West End before the Irish paid him any mind.

Noone embraces rejection as much as acclaim, knowing intuitively what Yeats meant when he said the joy is in the struggle. Reading Noone, you feel struggle on every page, a wrestling match between two sides of his brain, two sides of the Atlantic. If playwright Martin McDonagh is an English Irishman and Conor McPherson an Irish Irishman, then Ronan Noone is an American Irishman.

“I’m American,’’ Noone says. “It’s the country that gave me my wife [Jessica, a Braintree schoolteacher], my children, my house, my livelihood. The success I’ve had in America, it wouldn’t have happened in Ireland.’’

If there was an epiphany, it was a few years ago, at a smart dinner party in Skerries, a picturesque seaside town north of Dublin. Everybody around the table bemoaned George Bush’s America. Noone kept his mouth shut until someone used the word evil.

“I didn’t vote for Bush, I didn’t support his policies, but he was my president and I wasn’t going to sit around and listen to people who think ‘Baywatch’ is America go off on this ‘evil empire’ stuff,’’ he says.

A posh dinner party, smug know-it-alls popping off about a country they never lived in, and an Irishman rising to defend, in language both florid and salty, the place and the people who gave him a life he couldn’t have in his native land.