Void of people, full of judgment 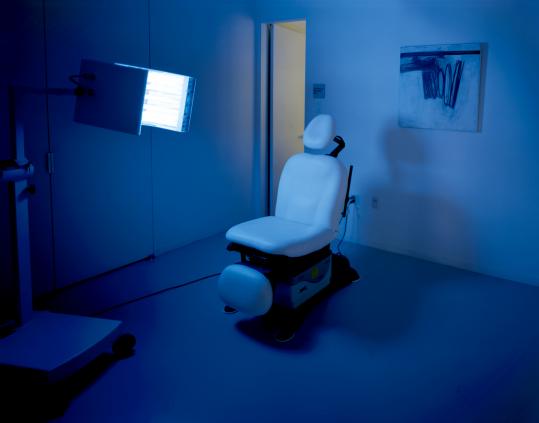 Like many of the images in Cara Phillips’s show at Suffolk University Art Gallery, “Blue Laser Consultation Chair, New York City’’ looks like the setting for a ritual.
By Cate McQuaid Globe Correspondent / September 2, 2009

There’s a lot of blue in the design of the consulting and operating rooms of cosmetic surgeons, at least according to Cara Phillips’s photographs. It’s not a deep, soothing blue, but often a light, almost electric one, like the blue of a swimming pool illuminated at night. A blue that might speed the pulse and widen the eyes of anyone exposed to it.

Phillips went to Beverly Hills and New York’s Upper East Side, among other upscale neighborhoods, to shoot these images, on view in the Suffolk University Art Gallery at the New England School of Art & Design. They are empty of people: There’s nobody for a waggish viewer to scrutinize, to judge the state of a chin, waistline, or bust. We have the stage and the props without any of the actors, and the result is both splashy and unnerving.

The sterile cleanliness and the bold, theatrical lighting imbue these scenes with a sci-fi atmosphere, a crisp perfection that human flesh, no matter how firm and pert, can never live up to. They look like sites for ritual: altars, of a sort, to transformation.

In “Blue Laser Consultation Chair, New York City,’’ a high, pale chair bathes in the eerie blue light projected by the laser in front of it. The laser itself, a panel of light above and a slight distance away from the chair, gazes down like the eye of God. In “Orange Laser Machine, Washington DC,’’ an arced panel tilted slightly upward, glowing in near blackness, looks oracular.

Phillips sometimes focuses on other equipment: plastic liposuction vats with brightly colored lids, or a pretty little white and blue hexagonal box in “The Whisper Machine, Washington DC,’’ which turns out to be a smoke evacuation system (I guess all those lasers might generate smoke).

All the photos ultimately depict elaborate marketing packages: magical places and tools that will help you alter your body to more perfect specifications. Showing us these places free of patients and doctors, Phillips leaves us to wrestle with our own judgments about cosmetic surgery, and perhaps our own desire to sit in that laser consultation chair, and be saved.

Constructing femininity
There’s more frankly unsettling but slyly witty examination of our attitudes toward the flesh on view in “Image/Imaged/Imaginary,’’ a two-person show curated by Heidi Kayser and featuring work by Millee Tibbs and Lauren Kalman at Fort Point Arts Community Gallery. Like many good feminist artists, Kalman and Tibbs often begin with the body as a site of dissonance and turmoil.

Kalman re-creates the marks of skin conditions using jewelry studs, then photographs the results. In the series “Blooms, Efflorescence, and Other Dermatological Embellishments,’’ she pairs extreme close-ups with wider shots in a series of artful diptychs. The wide shots are never so wide as to reveal her models’ faces.

“Blooms, Efflorescence, and Other Dermatological Embellishments (Cystic Acne, Chest)’’ reveals a sprinkling of pearls and garnets, as well as pink and black gemstones, protruding from the pale surface of a woman’s chest. Symbols of wealth, power, and femininity here signify disease and scars, mars to beauty rather than enhancements. It’s a terrific conflation of opposites.

Tibbs has three bodies of work on view. The strongest is the series “This Is a Picture of Me,’’ in which the artist juxtaposes her own childhood snapshots with images of her as an adult reenacting the scenes.

“Millee Talking to Daddy WPB 1979, 2007’’ pairs a photo of a small girl in a short, striped dress, hand on hip, phone to ear, eye focused on the camera, with an image of the artist in a replica of the dress and the same audacious pose. The dress’s hem barely brushes the tops of her thighs. The images featuring the adult artist are ridiculous and often disturbing, but paired with the old photos, they cleverly raise questions about childhood sexuality and the construction of femininity.

Inspired by Australia
Jinx Nolan’s collages on tile at Mobilia Gallery are at their best when they invoke the spaciousness of desert or sea. When she forgets space, the collages feel cluttered and so packed with odd, surreal images it’s hard to parse them, but when she lets them breathe, they become worlds unto themselves. The artist was born in Australia, and her often abstract collages were inspired by the landscape there.

A horizon line cuts across “Arctic Life,’’ setting everything squarely in a landscape. Nolan has spray painted the bottom with breathy, bright blue. Two gushes of white over the blue mark the pathways of a strutting penguin and a seabird coming in to land. The top half shows two white triangles bracketing an inverted blue one, as if we’re looking through two icebergs at the hot sky beyond. A lime green disk hovers at the rim of one white triangle. The tropical tones in this arctic scene make a point about the threat of climate change, sure, but issues are secondary to visuals here; the hot tones reverberate beautifully against the white.