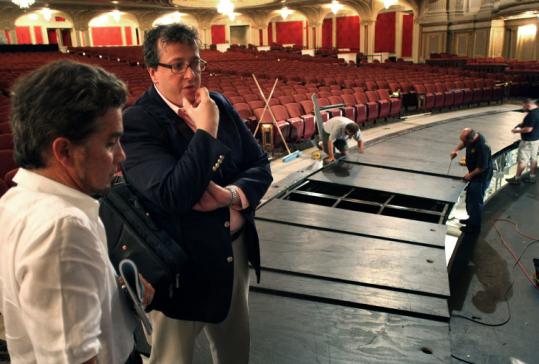 Everybody was supposed to be smiling. It was June 28, 2004, and arts leaders had been invited into the Opera House for a sneak peek at Clear Channel’s $38 million renovation of the abandoned building.

But Jonathan McPhee, Boston Ballet’s longtime music director, lost his enthusiasm as soon as he spotted the orchestra pit. Or what was left of it.

The space once used by impresario Sarah Caldwell to lead the musicians in grand operas had been partially covered with a thin layer of concrete. Three rows of seats were mounted on top. And that turned the now-covered section of the pit into a cave.

Fine, perhaps, for touring Broadway shows, which often used fewer than a dozen musicians. But it wouldn’t easily work for larger orchestras, such as the 46-piece ensemble regularly under McPhee’s baton.

“This theater represented something Boston had needed since the 1960s,’’ said McPhee. “By killing the pit, all my hopes were gone.’’

He recounted this on a better day earlier this month from inside the Opera House.

Workers hammered and drilled the now temporary wooden platforms that sit atop the newly renovated pit. This removable floor will allow the Opera House to keep the premium seats for touring shows. When the ballet performs to live music, the floor goes and the orchestra gets more room.

That’s important as the company embarks Sept. 19 on its first full season in the Opera House after more than three decades at the Wang Theatre. The $450,000 pit renovation was part of Boston Ballet’s deal to sign a 30-year lease with Live Nation, to which Clear Channel transferred ownership in 2006.

Boston Ballet leaders hope the Opera House deal brings stability to an organization that has had to deal with several years of financial turmoil which led to staffing cuts and a reduction in the number of dancers in the company.

A big part of the challenge began in 2004 when the then-Wang Center for the Performing Arts, feeling pressure from the soon-to-open Opera House, decided to replace the ballet’s annual signature production of “The Nutcracker’’ with the touring “Radio City Christmas Spectacular.’’ After a year at the tiny Colonial Theatre, the ballet moved “The Nutcracker’’ to the Opera House and kept the remainder of its season at the Wang. Last year, it signed the deal to move the entire season just down the street to the Opera House after negotiations for a long-term lease with the Wang broke down.

Along with the move into the Opera House, Boston Ballet has redesigned its website, hired a new executive director, Barry Hughson, and taken over its ticket sales, which had been handled by Telecharge. Now the ballet, not Telecharge, will pocket the $5.75 to $11.50 per ticket in handling charges. And the ballet will have full access to the data of ticket buyers, important when it comes to determining who attends and who might be interested in tickets in the future.

For subscribers, the Opera House offers a smaller house with impressive sight lines. They also will be dealing with ballet employees who know the season and understand their needs. In the past, ticket buyers have dealt with Telecharge workers, who sold tickets for a multitude of events at the Wang.

“Now we can cross-sell,’’ said Hughson, who begins his first season as Boston Ballet’s executive director. “For example, we can say, ‘Oh, you’re buying “Nutcracker.’’ Do you know about “Coppelia’’ in the spring? Can I encourage you to buy a flex pass or would you mind rounding up your order by 50 cents as a donation to the ballet?’ ’’

The 3,600-seat Wang was simply too big for ballet, Hughson says, forcing the company to reduce the number of performances of each program and also block off the theater’s balcony in recent years. The 2,600-seat Opera House is a better fit.

“This is a perfect sized house,’’ said Hughson, who, as executive director of the Atlanta Ballet, moved the company from the larger Fox Theatre to the 2,700-seat Cobb Energy Performing Arts Centre. “It gives us room to grow but it’s not so large it feels unsuccessful for people sitting with us today.’’

Nissinen said that Boston Ballet had no choice but to split the company’s season into two venues when the Wang found a new holiday show. But McPhee called the prospect of working long-term in that pit “unworkable.’’

To properly conduct the ballet orchestra, which has 46 tenured members but can add up to 20 other musicians for some productions, he says, you have to see the stage. He couldn’t after the original renovation. McPhee was tucked a few feet under that stage, facing the audience. The orchestra, performing partially under the concrete floor supporting the premium seats, needed to be amplified to be properly heard.

But even during those frustrating days, there was hope. When the Opera House was originally renovated in 2004, Chris Blair, an acoustician, had pushed Clear Channel to keep the pit the same size as during Caldwell’s heyday with the Opera Company of Boston, which ceased operating in 1990.

Clear Channel refused, wanting to create more seating. But Blair did get his way in one respect. Instead of demolishing or filling in the pit, the thin, concrete floor was poured over it. In addition, the floor was supported by bolts and screws attached to columns. That meant it would be relatively easy to detach and demolish, said Blair.

Jim Jensen, executive director of the Opera House, said that having Boston Ballet as one of its anchor tenants provides the kind of security that has made him comfortable turning down bookings in recent months. That includes rock concerts, the Alvin Ailey Dance Company, and a date with comedian Lewis Black.

In addition, other local companies, including Boston Lyric Opera and Opera Boston, have approached the Opera House to see if dates could be cleared. Jensen said he has fewer than a half dozen from September, when Boston Ballet kicks off it season, to June. The bulk of the theater’s programming continues to be one-off rock concerts and touring productions of “Fiddler on the Roof,’’ “In the Heights,’’ and “Grease.’’

“My message to other presenters who would like to present in the Opera House is that the summer is generally available,’’ he said. “There’s been this accepted sort of golden rule that nobody presents in August because everybody goes to the Cape. But as I’ve pointed out, Fenway Park’s sold out every night.’’

Boston Ballet officials say they feel fortunate to have found a way to serve as a resident company of the Opera House. And they’re not taking anything for granted. Even though the Opera House is less than a half mile from the Wang, the company is making sure longtime subscribers are comfortable with the move.

Earlier this month, Boston Ballet held a “meet your seat’’ event attended by many of its subscribers. Norwood’s Maureen Venditti, who has been attending performances since 1981, admitted she was a bit leery of the move.

“I was thinking, ‘Oh my gosh, the Wang Center’s really beautiful,’ ’’ she said. “But once I walked into the Opera House, I changed my mind. There was such energy, and once you can see the beauty and architecture, you realize it’s similar, just smaller.’’