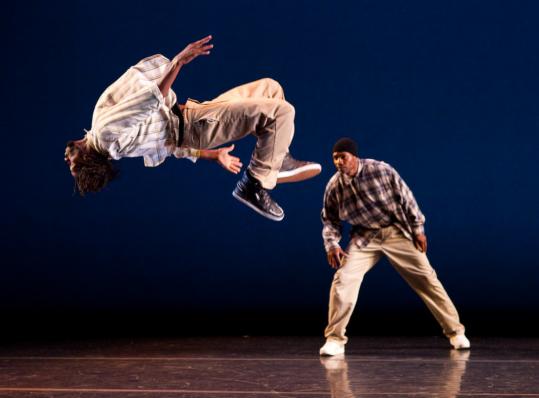 BECKET - About two decades ago, the ballet world evolved from merely tolerating modern dance to embracing it as a beloved fraternal twin. Modern dance’s tactility and use of weight and breath have helped ballet dancers move with a greater depth.

Today hip-hop dance is increasingly recognized as a necessary part of the serious dancer’s training. True, you might not often see ballerinas plunging into the genre’s signature head spins and windmills, but the b-boy’s and b-girl’s loosely undulating torso and breathtakingly melting yet casual way of taking to the floor have seeped into the movement vocabulary of many in-demand contemporary choreographers.

Which is not to suggest that hip-hop dance needs any extra props, so to speak. Rennie Harris Puremovement, performing this week at Jacob’s Pillow, proves that hip-hop can move from the street to the concert hall without becoming something other than itself - which, as most practitioners will point out, is part and parcel of an entire culture. Since 1992, company founder, director, and choreographer Harris has been exploring the ways in which a theatrical setting can expand his art form, and the program’s four dances reflected a broad range that includes both storytelling and flat-out dance.

It was fascinating to see what different body types brought to the movement. The compact bodies, with their lower base of gravity, were both grounded and forceful: Ivan Manriquez was a tornado, either hurtling across the stage in vaults, somersaults, and cartwheels or spinning endlessly on his head. Robert Cohen showed his beautiful backbend in one delicious slow drop back, and then later, in a lightening circle of turns. Shafeek WestBrook stopped time repeatedly with various “freezes’’ while propped up on one or two hands.

The lanky Kyle Clark, on the other hand, was wild and snaky, exposing the riskiness of the movement. The company’s four women unveiled mysterious little details and shimmer with a more overt sensuality than the men.

Interestingly, the newest piece, “Something to Do With Love - Volume One,’’ felt retro. With songs by, among others, Marvin Gaye and Nina Simone, the dancers keep grooving to a steady beat: It was disco fever all over again. The charming Dinita Askew and the sassy, witty Melanie Cotton danced with constant sanguinity, their inner joy spilling out. Overall, the tone was mostly mellow and friendly, albeit with some hints of drama.

The 1992 “March of the Antmen,’’ however, dove right into the darkness of a war zone, the stage eerily lit and filled with smoke. The dancers crouched and crawled, pointed invisible weapons, and ducked incoming fire. Surprisingly, this short dance conjured a clear picture of tension and horror without bathos.

Of course, the more formalized performance atmosphere has its drawbacks, most obviously the loss of the immediacy and intimacy that occurs on the street, where the audience usually forms around the dancers. Fortunately, Harris’s dancers projected a vitality that at least held the viewers near, and often, enthralled.

Though “P-Funk’’ (1992) was darkened by the shadow of the harsher aspects of urban life, it and “Students of the Asphalt Jungle’’ (1995) were paeans to the gleefully outrageous physicality that most defines hip-hop dance. The program ended with “Asphalt Jungle,’’ and by then, it felt like even we in the audience were in on the party.