In stages, a creation comes together 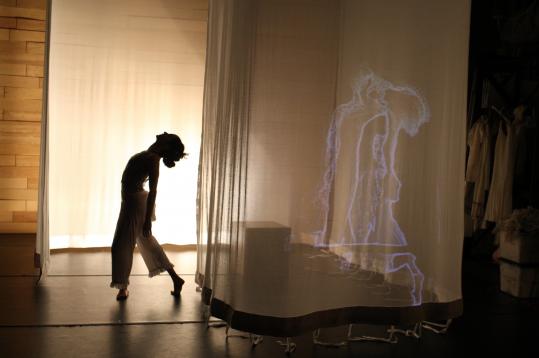 Nell Breyer has a big voice and a sturdy, authoritative stride. Alissa Cardone is lithe and lively. Bronwen MacArthur moves and speaks with quiet precision. And Lorraine Chapman radiates breezy energy, stretched on the floor in a star-shaped sprawl or flinging her arms from side to side as she warms up before a dance.

“We couldn’t be more different,’’ Cardone says during a rehearsal break. “We have different aesthetics, different ways of moving, and different personalities.’’

But dancer-choreographers Cardone, MacArthur, and Chapman and media artist-choreographer Breyer have fused their approaches and styles in an original work, “The Disappearing Woman,’’ presented by Summer Stages Dance. The multimedia piece makes its world premiere July 11 at the Institute of Contemporary Art.

The creative process wasn’t always easy. “We’re used to making our own individual work,’’ MacArthur says. “I think we all wondered whether putting all these voices together would make a stronger piece. Would something be lost because everybody had to compromise? Or have we succeeded in joining our visions?’’

A month before opening night, Breyer stands in the sleek, spacious ICA theater watching Chapman swivel, bend, and arch her body on the waterfront walkway outside the window. Chapman is dressed in black, silhouetted against the harbor and the white sky. Breyer turns and squints at her video camera screen. Beside her is Richard Colton, a founding director of Summer Stages Dance at Concord Academy, one hand cradling his chin.

“I really like the simplicity of the black in front of the water,’’ Colton says. “It’s stunning.’’

Breyer nods. “Costumes should be simple and stark.’’

Then Chapman bursts into the theater, cheeks flushed and hair tousled. “I love the idea of a Baroque-style dress blowing in the wind,’’ she says. Breyer purses her lips. Colton smiles.

“We’re moving this from the idea level to the reality level right now,’’ Breyer says later, ruefully. “Which is always extremely disappointing.’’

The collaborators have certainly set their sights high. “The Disappearing Woman’’ aims to address the anxieties of women amidst the fragmentation and alienation of the digital age, they say. Hanging scrims will form a rectangular enclosure that suggests the home as both confinement and safety zone, explains Breyer. Recorded voice-overs will muse on the challenges of balancing career and family and the inundation of choice in a world of consumerism. Projected video footage will refract and dissect the human form; multiplied bodies will peel away from the central figure like ghostly shadows.

“I take organic input and draw over it,’’ says Breyer, a research affiliate at MIT’s Center for Advanced Visual Studies who studied art at Yale and cognitive neuroscience at Oxford before she began to combine multimedia and dance. In “The Disappearing Woman,’’ her haunting video art conspires with the arcs of the dancers’ limbs and dramatic ribbons of light to generate a sense of dislocation and doubling.

The intricate tangle of media and movement requires both distinctive creative personalities - each dancer has several minutes of solo material - and fluid teamwork.

“Ideally, each of the artists gets fully individualized, and yet there’s a kind of weave between the three of them - a certain language that they speak,’’ says Colton, who has seen “The Disappearing Woman’’ from its inception.

Colton was the one who brought Breyer, MacArthur, Cardone, and Chapman together. At their first group rehearsal a little over a year ago, Cardone distributed images for physical inspiration. They all envisioned their spines as spiral staircases and lifted their heads like Egyptian queens. Then MacArthur shared a choreographic exercise in which everyone initiated movements from specific body parts: the chin, an elbow, the inside of the leg.

“That first meeting was typical of our different styles,’’ Cardone says. “Bronwen is anatomical. I’m mining the images. And Lorraine is like a water spout that gushes out physical movement; then she figures out what she’s done afterward. I walked away from that rehearsal thinking, I have no idea how this performance is going to come together.’’

It came together slowly, in stages. After a series of residencies at Summer Stages Dance, the Baryshnikov Arts Center in New York, and the Vermont Performance Lab at Marlboro College, the women began rehearsing at the ICA and at the Allston rehearsal space of Kinodance, a company Cardone cofounded.

While Chapman and MacArthur have led their own companies and are used to developing work individually, Cardone says her collaborative, Kinodance, has trained her to interface her ideas with others. “I’m a big blob,’’ she says. “When I’m in a room with other people, I’m engaged in what’s going on with everybody.’’ In this particular process, she says, she has been a “personality mediator.’’ “It’s been challenging,’’ Cardone acknowledges. “We really needed time to figure out what makes all of us tick.’’

A week after the filming of Chapman’s waterfront dance, Breyer and Cardone sit amidst half-assembled scenery in the Kinodance space. The cement floor is strewn with snarled wires. Video footage of Cardone flickers luminously on suspended scrims. Large wooden boxes are scattered on the ground.

“Lorraine came up with the idea of putting our heads in boxes,’’ Breyer says.

“No, I came up with the idea of the boxes,’’ Cardone says.

“Lorraine was the first one to dive into a box.’’

“Does it really matter?’’ Breyer teases, and Cardone laughs.

“It’s taken me a while to tell my ego to shut up,’’ Chapman acknowledges at another rehearsal. But the process, she says, has gotten increasingly easier. “Our coming together has made the performance come together,’’ she says. “I think we’re all finally starting to see the finished product in our mind’s eye.’’

Costumes have been selected: not stark black but not quite Baroque, an array of gauzy dresses in shades of cream and white. Transitions between sections have been ironed out. The soundtrack - mostly jazzy, pulsing music and grainy recordings - has been set.

“At this point, we’ve shared our processes with each other,’’ MacArthur says. “I have moments of my solo that came directly from Alissa’s image exercises. It’s all gradually becoming integrated.’’

In the final rehearsals before opening night, MacArthur, Cardone, Chapman, and Breyer return to the ICA to weave solo material into a cohesive whole. “We made up this ending a few minutes ago,’’ Breyer says. As the music swells, the dancers intertwine limbs and huddle in a massive knot. Every finger and toe is smoothly aligned; their muscles extend and flex in symphonic coordination.

“The good thing is that we still have 2 1/2 weeks to throw this ending out,’’ Cardone says with a wry smile.

But for the moment, they writhe and heave and sway like one many-tentacled body, all its parts working together.

Presented by Summer Stages Dance at the Institute of Contemporary Art, July 11 at 7:30 p.m. 617-478-3100, www.icaboston.org, www.summerstagesdance.org