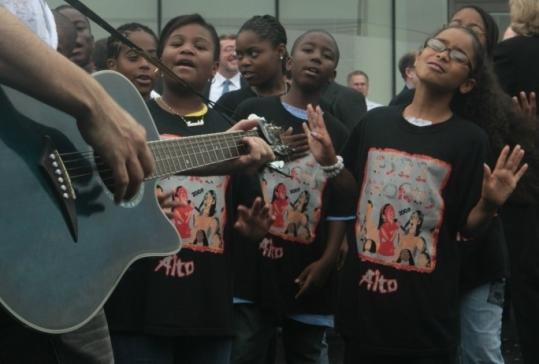 NEW YORK - They’re a bunch of regular grade school kids, but their fans include Ashton Kutcher, Tori Amos, and Perez Hilton - plus millions of YouTube viewers.

A New York fifth-grade chorus that first appeared on an online video has become a world-famous cyber-phenomenon.

Yet the young singers from Public School 22, who were recently featured on the new album from buzzed-about Boston band Passion Pit, have rarely left Staten Island.

Much of the credit goes to a music teacher who apparently is a natural at public relations. “A friend in advertising told me that if I ever want to leave teaching, I should come and work for them,’’ jokes Gregg Breinberg, the children’s music director.

A few years ago, he taught his kids to sing the group Coldplay’s hit single “Viva la Vida’’ and posted the performance on YouTube, followed by a Tori Amos song.

Gossip blogger Perez Hilton came across them on YouTube singing the Amos song in a Manhattan atrium, with Amos tearing up as she listened. Hilton was bowled over by the innocent-sounding voices.

He posted the link on his blog, triggering a deluge of interest that made the clip one of the top 10 YouTube videos.

Since then, the P.S. 22 Chorus has been featured on television and in big newspapers, while 7 million viewers (and counting) have watched them on YouTube.

The chorus even popped up on Kutcher’s Twitter feed.

“Honestly, I never imagined that things would take off for the chorus the way they have in the last few years,’’ says Breinberg. “But these kids have risen above tremendous obstacles and have made their voices heard.’’

On their last day of elementary school, they sang before Mayor Michael Bloomberg at a hospital ribbon-cutting ceremony, an upbeat rendition of the German synthpop group Alphaville’s “Forever Young.’’

Many of the 70 kids come from struggling families, with about three-quarters of them eligible for free school lunches. Others have academic difficulties or are learning English as a second language.

Ten-year-old Gabriel Vasquez says when he entered the chorus, “I was scared, I didn’t want nobody to tease me. But Mr. B taught me how to let out my feelings and not to hold it back in.’’

With aching openness or joy, the chorus sings about love, loss, belief, and betrayal in music by Amos, Stevie Nicks, and even Billie Holiday.

The children dote on the man they all call “Mr. B’’: a 36-year-old guitar-strumming teacher with a winning smile who cracks jokes and makes faces for them.

“The most important part of my job is to make the kids love music,’’ he says. “Technique comes later.’’