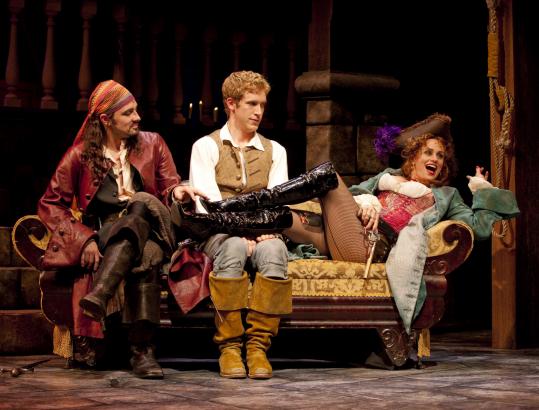 To the people who were hooting and hollering at every ribald joke and bawdy gesture, the Huntington Theatre Company's production of "Pirates! (Or, Gilbert and Sullivan Plunder'd)" was clearly a grand night at the operetta.

But for anyone who wants more than sitcom-level rewrites, broad yet toothless parody, and lots of tired pirate gags, it is the very muddle of a modern messed-up musical.

"Pirates!" (if that exclamation point gives you pause, come sit right here by me - and brace yourself, because every single song title in the program has one, too) is the brainchild of Gordon Greenberg, Nell Benjamin, and John McDaniel, who have taken the perfectly fine bit of fluff known as "The Pirates of Penzance" and updated, mashed-up, sexed-up, and topicalized it within an inch of its life. Apparently an evening of silly songs and light romance just isn't complete nowadays without gyrating pelvises, pounding drums, "political" jokes that don't actually have a political point, and onstage vomiting.

I don't wish to sound like a prude; I certainly don't mean to sound like a Gilbert and Sullivan purist, because I'm not: Their buoyancy and wit have aged well, their encrustations of fussiness and preciosity less so. In principle, I'm not at all opposed to having a spot of fun with the old boys. But this just isn't my idea of fun.

Maybe it's yours. Maybe you want to see the bevy of young daughters of the Major-General strip down to bloomers and camisoles, then cavort around the stage and pant at the pirates; maybe hearing them sing "We'd be safer, there's no doubt,/If our blouse we do without" as they do so leaves all your teeth ungritted. Maybe, like the "Pirates!" creators, you're willing to entertain any image, no matter how incongruous - pirates singing about cow-tipping? - for the sake of stuffing in one more joke.

Or maybe you're just a really, really big Johnny Depp fan. Steve Kazee's performance as the Pirate King is extravagant and showy, but it is also strikingly, and ultimately irritatingly, familiar.

Depp threw a bucket of refreshingly salty water into the first "Pirates of the Caribbean" movie with his insane yet meticulous work as Captain Jack Sparrow, which he famously based on the stylings of Keith Richard and Pepe Le Pew, but even he's grown stale in further iterations of the type. Watching Kazee impersonate Depp impersonating Richard (and Pepe, bien sur) is just weird - and then tedious. And his tormenting of a front-row patron in an extended bit of forced audience participation is downright painful.

As innocent (not to say dimwitted) young Frederic, who was mistakenly indentured in childhood to the pirates instead of to naval pilots, Anderson Davis has an attractive and powerful voice that brings an added sweetness to his fresh-faced presence in the midst of mayhem. Ed Dixon certainly knows what he's doing as the Major-General, riffling through his challenging songs with ease, though like Kazee he's too inclined to milk the audience for yet another round of applause.

Farah Alvin's Mabel is a spunky Victorian explorer - a bit odd, since everyone else seems to be somewhere in the 18th century, except when they're dancing like it's 1999. She's mostly fun to watch, but too modern in looks and movement for whatever period she may be in. And Cady Huffman's Ruth is just strange, though it's not entirely her fault: The plain nursemaid has been recast as a kind of seagoing slut, with her fallen virtue becoming a key part of the plot involving the pirates' curse.

What curse, you say? Oh, the curse that has them unable to stay on dry land unless they marry virgins. (Cue laugh-track here.) Benjamin plundered a song from "Ruddigore" to explain all that, and it works OK - at least, it works better than the bizarre calypso flavorings that infuse some of the songs. What makes them bizarre is that they start out strong, then fade back into some kind of martial mishmash. If you're going to mash something up, make sure you mash it up thoroughly.

The Huntington provides its usual lavish attention to costumes and sets, and the orchestra seems more than adequately staffed. (Was that an accordion? And a steel drum?) What doesn't seem evident is a real reason to go to all this trouble. Do Gilbert and Sullivan fans need to be shocked awake? Do younger audiences need sex jokes to make them stay in the theater? Or could both segments of the population - and more of us besides - actually be smarter than this plundered piracy seems to give them credit for?