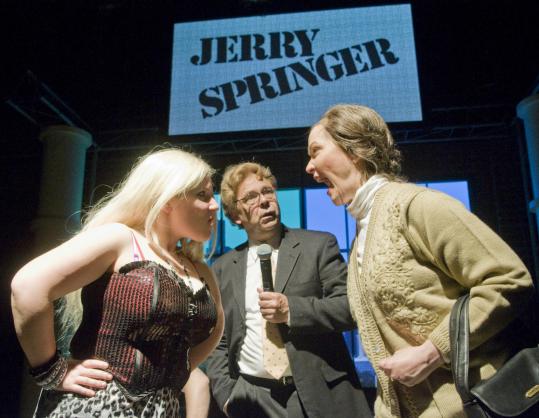 STRATTON MCCRADYMichael Fennimore as Jerry Springer between Joelle Lurie (left) as a wannabe stripper and Amelia Broome as her mother. (Stratton Mccrady)
By Louise Kennedy Globe Staff / May 6, 2009
Text size – +

''Jerry Springer: The Opera." It sounds like a punch line, or at best a one-joke show. But it is, in fact, not only an opera but a clever - and sometimes more than clever - piece of art. By turns hilarious and thought-provoking, obscene and moral, it both amuses and instructs. But mostly amuses.

You may have heard more about the controversy surrounding Richard Thomas and Stewart Lee's work than about the work itself. From its first appearance in London to the first full performance here Friday night, "Jerry Springer: The Opera" has drawn protesters outraged by what they've heard about its depictions of God, Jesus, the Virgin Mary, and other religious topics.

It's a shame that the protesters never seem to actually go inside the theater and see the show. For what they'd find there is, though frequently and startlingly vulgar, also a surprisingly heartfelt celebration of faith. Maybe not orthodox faith, but faith of the sort espoused by William Blake, who supplies the ultimate moral lesson of the show: "Everything that lives is holy."

Before "Jerry Springer" gets to that, though, there are plenty of trash-talking pole dancers, transvestite hookers, and tap-dancing Klansmen to get through. The opera is, of course, based on the tackier-than-tabloid show of the same name, and perhaps the biggest difficulty Thomas and Lee confronted in writing the book was coming up with parodic characters more outrageous than those who have already appeared onscreen. The KKK chorus line definitely puts them over the top, however.

The first act is essentially a "Saturday Night Live"-quality parody of Springer's show, set to music - all except the lines spoken by Michael Fennimore, as Jerry-Jerry-Jerry, and John Porell as his security goon. Oh, and a few gags from the "Warm-Up Man," played by Timothy John Smith, who also handles the role of Satan, just to give you an idea of where Act 2 is headed. The action, and the guests, are silly, extreme, and entertaining, if a little repetitive; seen one trailer tramp, seen 'em all.

What lifts "Jerry Springer" above sketch comedy, however, is its willingness - and ability - to turn our laughter in on itself. We begin by laughing at how grotesque these losers are, but hearing their longings set to music - even if their longings are only to be on TV or to be spanked by a lover, and even if the music is more cleverly referential than original - forces us to hear the real emotions beneath the jokes. Beyond that, the show manages to make us ask just what we're laughing at, and why. Who's more grotesque, after all: the loser, or the spectator who only cackles at his loss?

Director Paul Daigneault teases out all these nuances without letting them clog the flow of the humor; like the best comedy, this show is funny and serious at the same time, rather than alternating humorous bits with globs of moral improvement. He also corrals a large and rambunctious cast of characters into order, or at least orderly disorder - greatly aided by David Connolly's witty, precise, and allusive choreography.

Michael Fennimore bears an uncanny resemblance to Springer, and he catches the oily note of self-justification in the host's refusal to understand what's wrong with his show. But he's outshone by Smith, whose powerful singing voice is matched by an intense physicality and a gift for sardonic humor that make his Satan irresistible to watch.

Don't worry, though - God gets a strong performance, too, from operatic tenor Luke Grooms (after he's done a fine comic turn as a serially cheating fiance). Amelia Broome has a lovely prissiness as a pole dancer's mother, and then a prissy loveliness as the Mother of You-Know-Who, while Kerry A. Dowling handles everything from a troubled guest to Jerry's inner Valkyrie (it's opera, remember?) with aplomb.

Seth Bodie costumes all of them, and the onstage "audience" besides, in one outrageous costume after another; where did he get all that silver lame? Eric Levenson builds a big, versatile set - TV soundstage or seventh circle of Hell? It's both! - and Karen Perlow's lighting, Aaron Mack's sound, and Seaghan McKay's projections round out the thoughtful technical contributions to this complex but crisp production.

You might not see how the high art of opera and the low art of TV talk could ever find common ground. But they marry surprisingly well - and it might even be a marriage made in heaven.

Music by Richard Thomas; book and lyrics by Stewart Lee and Thomas