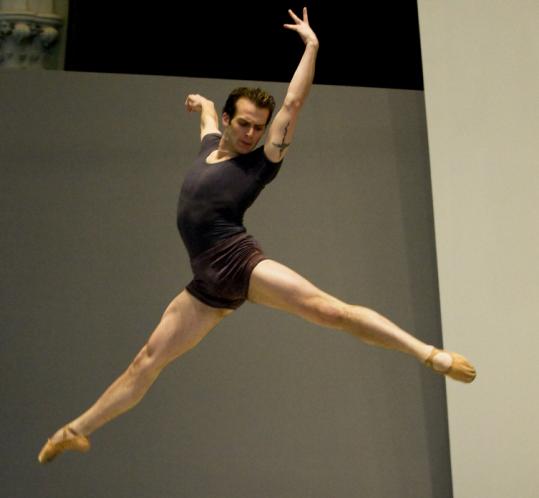 CAMBRIDGE - The title of José Mateo Ballet Theatre's latest concert, "Revel Without a Cause," whimsically refers to Mateo's conscious choice to liberate himself from the necessity of balletic narrative. And revel he does, as shown in the new abstract "Streams," given its world premiere at the Sanctuary Theatre Saturday night.

"Streams" takes inspiration from Terry Riley's 2004 composition, "The Cusp of Magic," for string quartet and pipa. As the tuneful, rhythmically charged music plays off an eclectic range of influences, from North Indian raga to American blues, Mateo unspools his neoclassical vocabulary with playfulness and invention. Stoney Cook's vivid lighting, which ranges from shadowy reds to the dappled pastels of a spring sunset, helps set the tone.

The work's opening is an explosion of exuberance, highlighted by Kehlet Schou's terrific corkscrew leaps and a blistering turn that melts into a bum spin on the floor. In the second movement, Susan Ashton Bourque's liquid arms, shoulders, and torso provided vivid contrast to legs that sliced and kicked with muscular clarity. She was ably partnered by Henoch Spinola, who stepped in last minute for an injured Matthew White to also partner Elisabeth Scherer.

Tensile and articulate, Scherer offered the most accomplished, full-bodied dancing of the evening, with clean, long-lined extensions and sharp dynamics through quick changes of direction, her torso often twisted away from the movement of the legs. The full company finale featured some of Mateo's most modern dance-oriented work for the men, with weight often sinking into the floor in deep lunges. It offered an intriguing contrast to the elevated pointe work of the women.

The concert's two other works were also satisfying to view through an abstract lens. The program opened with the 2003 "Reverie," set to the first two movements of Ravel's Piano Concerto in G. The first movement features some of Mateo's most musical choreography, showcased beautifully in the sparkling, quicksilver footwork of Madeleine Bonn. Unfortunately, however, the musical clarity also called attention to a lack of precision and uniformity in the ensemble sections.

The static poses opening the second movement work against Ravel's sublime music, but Bonn was able to tap into the underlying breath and connective flow. Her duet with Spinola was highlighted by stunning lifts. At one point, he drapes her over his shoulder and raises her arched back with one hand as he skitters backward. Mateo should revisit this piece and choreograph the concerto's final movement as well. All the potential is there.

Despite the mythical allusion, "The Sirens" works as an abstract Baroque ballet in white. Set to the music of Vivaldi, this 1989 work features a straightforward neoclassical vocabulary and eye-catching group patterns. The elegant Sybil Watkins and Jacob Hoover, capable but slightly lacking in definition, led a corps of eight, who danced with flair and commitment.

JOSÉ MATEO BALLET THEATRE'S 'REVEL WITHOUT A CAUSE' At: The Sanctuary Theatre, Saturday night