Suffering across the ages

Her 'Trojan Barbie' shares visions of women and war 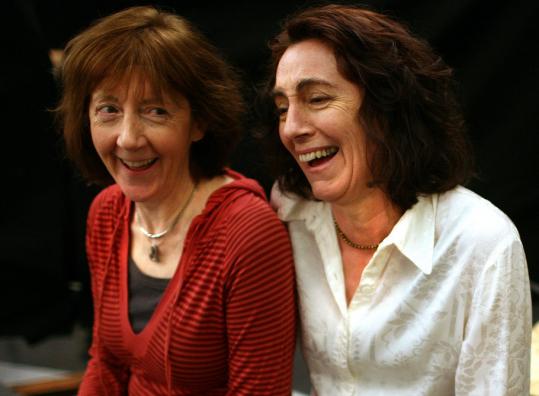 Evans is talking about her new play, "Trojan Barbie," which is having its world premiere at the American Repertory Theatre's Zero Arrow Theatre. And she's talking about the ancient Greek tragedy of the women of Troy, whose city is overrun and husbands killed, leaving them captives of the Greek leaders.

In "Trojan Barbie," which had its first preview last night, worlds collide.

Evans's play tells the story of Lotte, a doll-repair expert who desperately needs a vacation. She books herself on a modern-day singles tour of Troy in hopes of finding romance. But what she's pulled into instead is a tragic parallel universe.

Off on her own, Lotte is suddenly kidnapped and taken to the ancient ruins of Troy during the Trojan War. As Troy's royal family is being killed off by Greek forces, Lotte is dragged to a detention camp filled with women including Hecuba, Clytemnestra, Cassandra, Andromache, and Helen of Troy.

They all suffer great losses. And the corpses left behind are portrayed by broken dolls.

Whether Lotte has actually traveled back in time or the inhabitants of that ancient world somehow ended up in the present remains ambiguous. But what is clear is the political statement Evans hopes to make about the suffering that is always inflicted by war.

"Just thinking about 'Trojan Women' and just how much that story of women in war, their suffering, continues, I started thinking about the strangeness of that and its distance from us in time - but it is also the condition of our lives now," says Evans, sitting inside an ART rehearsal hall.

"There are lots of different times and cultures happening all at once," she says. "You see images in the newspaper of women who look like they came out of biblical times, but they are holding the most modern machine guns."

Soft-spoken and small-framed, with shoulder-length brown hair and a shy smile, Evans started her journey as a playwright late in life. Born in England and raised in Australia, she says she first decided to test her physical skills as an acrobat in a "cabaret musical-type women's circus" in Melbourne.

"It was short and unremarkable," she says, blushing. "I was being trained to behave like a bag of socks. I had to do forward rolls and stand on my head. I ended up in the circus band."

After that short-lived experience, she worked in a women's refuge for those who had suffered domestic abuse. "It was really hard," she says. "I certainly saw another side of life."

That job wasn't exactly for her either. So she picked up her saxophone, performing with bands in different theaters.

Nine years ago, Evans came to the United States to pursue her MFA in playwriting and a PhD in theater and performance at Brown University. She now teaches playwriting and screenwriting at Harvard University and lives in Providence with her partner. Asked her age, she says, wryly, "I'm younger than Barbie," who recently turned 50.

"Trojan Barbie" began as a commission from the University of San Francisco's Performing Arts and Social Justice program. Evans was a resident playwright for one semester and was asked to write an adaptation of "The Trojan Women" for both students and El Teatro Jornalero!, a Latino theater company made up of immigrant workers.

"I wasn't interested in this idea of modernizing an old story. That just wasn't very imaginative to me," she says. What she came up with instead was a play called "The Doll House."

"I was trying to get the character Lotte in focus and stumbled on this website on doll hospitals, and I was just amazed by the way these dolls look," says Evans. "The dolls look like bodies from war zones, in a way. They look like war photographs, these very disturbing broken bodies. Yet they can be repaired, and they can be made better."

Evans elaborates on the doll theme: "The dolls are living and dead," she says. "So when Lotte goes to the detention camp, what to her look like broken dolls, to the women of the camp are real corpses. The dolls allow me to set up a sort of double vision onstage. And I think also it speaks to our distance from other people's suffering. It's not quite real."

Evans continued to work on the play after the commission was over, wrestling it into shape at a festival sponsored by Atlanta's Synchronicity Performance Group. It won the Jane Chambers Playwriting Award in 2007 and eventually captured the attention of the ART.

For Gideon Lester, director of the ART's 2008-09 season, choosing the play was an easy decision.

"I loved this play as soon as I read it. And I never had such a unanimous response from my colleagues when I gave them the play," says Lester, who is also working with Evans to launch Harvard's first playwriting festival, which will feature staged readings of works by student playwrights, working with professional directors, next month. "I responded to the story as a war play that isn't a documentary or politically correct or obsessed about how to represent war. It doesn't have a time stamp. It takes a very long view of history. . . . It has a dreamlike quality, and somehow it's quite real."

Director Carmel O'Reilly has had extensive discussions with Evans about "Trojan Barbie," and she emphasizes the importance of helping the actors ease into its transitions.

"Part of getting to work with a play is creating a space where you can exchange ideas and get to know each other, making sure we're on the same road," says O'Reilly. "And like 'The Trojan Women' itself, this play is episodic and it moves in pieces, but those pieces fall into place. It feels at first when you read the play like they are dislocated from each other. But once you start the process and talk about the play and work with the actors, the fit starts to happen."

Making that kind of connection is what Evans has in mind.

"We live in a world where you turn on the TV and there's the Shopping Channel and the war in Iraq and all of these things coexist and we try to make sense of them," she says. "In a way this play is about the past that lives in the present."

Megan Tench can be reached at mtench@globe.com.