Joining words and music in power and light 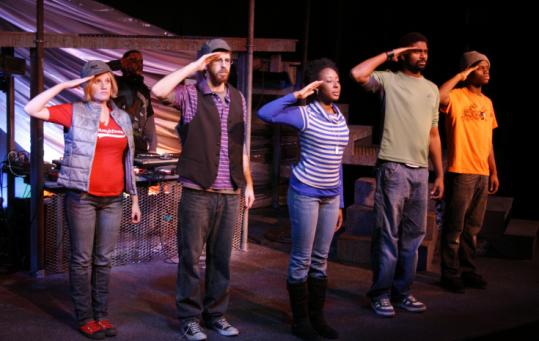 At first blush, "ARTiculation" looks like a free-form poetry slam driven by some well-intentioned young performers. But don't be fooled. "ARTiculation" is a sharp, smart, funny, and fearless evening of stories and comments told through spoken word and music, delivered by five powerhouse performers and one DJ, all of whom surprise and enchant with their unadorned honesty and lyric dexterity.

The evening is organized around a set list of poems and sketches that cover a range of topics - love, abuse, expectations, racism, violence, betrayal - all of which were written by the performers. "ARTiculation" opens with "I Teach," a kind of explanation of the performers' motivation for writing: "pen in hand, word in mouth, beat in feet." Then Tory Bullock delivers "World Changed Colors," a rhythmic examination of how skewed the world has become for teachers whose students now see that "green is for money, not trees" and "the land of milk and honey is now cheesy fries and burgers."

Reaching out to help one another navigate the unstable world in which they are expected to survive and thrive becomes an underlying theme of the poetry in the show. And nothing is off-limits, whether it's a dead-end job that offers the opportunity to be "contractually obligated to be degraded" or thoughtless racism, illuminated in the clever sketch "Race Talk."

Although the performers are clearly comfortable working together, they also celebrate their distinctly individual personalities. Nik Walker nearly brings down the house with his hilariously over-the-top "Devil Woman" and a brilliantly rhythmic name-dropping litany of poets through the ages, but Bullock matches Walker's commanding stage presence with "All Up in MySpace," about a virtual relationship that falters when reality intervenes. Marvelyn McFarlane only has to strike a pose to have the audience's attention, but just when we're sure she's only teasing, she reveals a character's deep wound in "I Know Her." Terri Deletetsky's powerful singing voice adds poignancy to a tale of lost love, and Danny Balel's simple plea for faith aches with longing and regret.

The performers are accompanied by DJ Reazon, whose creative scratching, percussive rhythms, and guitar riffs not only add a layer to the production but become another character with a story. Reazon provides moody backgrounds and works in snippets of familiar songs, and this talented ensemble doesn't hesitate to break into a cappella harmonies, including a haunting section of "Amazing Grace."

Director Lois Roach has a knack for bringing out the best in performers. For "ARTiculation," she's clearly given the group some polish and precision and created a flow for the collection of poems and sketches. Roach also makes great use of Jarrod Bray's creative stage design for the Boston Playwrights' Theatre, where two sets of stairs move up toward a balcony over the DJ, allowing for a dynamic flow of performers on several levels. A giant sheet of industrial plastic is draped across the upstage wall, and Mark Abby VanDerzee's lighting transforms it into dramatically different backdrops.

The poet-performers of "ARTiculation" embrace the complexity of life with passion, humor, and poetic flair for one of the most energizing and entertaining evenings seen in a long time.