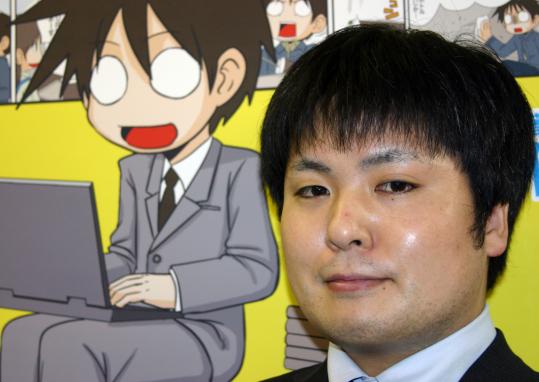 TOKYO - The American poet Theodore Roethke called it "the inexorable sadness of pencils." It's the desolation of time lost and dreams forsaken while sitting in an office.

Japanese office workers know that sadness in their bones. Millions of them linger dutifully at their desks until well past 10 p.m.

Now they have their own artist. He is Makoto Yoshitani, a 30-year-old systems engineer who himself lingers late into the evening in an office in Tokyo, where he customizes accounting software for corporate clients.

In a hugely successful series of comic books - more than 850,000 copies have been sold - Yoshitani chronicles the existence of an office-bound young man who has zero social skills and is infected with an especially virulent strain of inexorable sadness.

In one episode, he attends a meeting. His boss is there, bloviating. The young man cannot stop fiddling with his pen. He unscrews it and, to his horror, the top pops off, striking his boss in the cheek.

"I . . . I am sorr . . .," the young man stutters. The boss gives him a quick glance but continues talking as if nothing has happened, as if the young man does not exist. Sitting there silently and hopelessly, the young man thinks, "Please, please, say something."

In a global survey last year, Japanese workers were far and away the least inclined to show initiative at work. The consulting firm Towers Perrin surveyed nearly 90,000 workers in 18 countries and found that just 3 percent of those contacted in Japan were willing to do extra work to add value to their companies. The global average was 21 percent.

Those numbers, which have been echoed in similar surveys here, come as no surprise to Yoshitani. "I think a lot of people feel it is uncool to be gutsy at work," he said. "You want to do a good job . . . but you don't want to take it a step further."

Young office workers can easily see the folly of working too hard and measure its soul-crushing consequences, he said. They need only look at their parents and others in the postwar generation who sacrificed their personal lives to build Japan into the world's second-largest economy.

"Those generations older than us have no friends, and they have no hobbies," he said. "But we have found out that there are other ways to live."

That other way is the path taken by the "hodo-hodo zoku" - the "so-so folks" of youngish office workers who avoid stress, turn down promotions, and regard ambition as a kind of cancer. Being so-so is plenty good enough for them. The apparent proliferation of such slackers in the workplace - a phenomenon that is sufficiently threatening to the Japanese economy to have warranted front-page coverage in the Wall Street Journal - guarantees a growing readership for Yoshitani's books.

"There are more and more people who want to do things hodo-hodo," he said. "I actually don't know anyone who wants to be promoted." Yoshitani's anecdotal impressions are supported by government statistics. The percentage of Japanese women who remain single into their 30s has more than doubled since 1980. Demographers say postponement of marriage is the primary reason for Japan's plunging birthrate and for a slow-motion population implosion that by 2050 will have cut the country's current workforce by 70 percent.

An otaryman, then, is an oxymoron of the office. His head and his heart are usually elsewhere. He is surrounded by fellow office workers but can't figure out what to say to them. He stays late at work not because he really wants to, but because everyone else does. Yoshitani concedes he is that otaryman.

"We systems engineers often say to each other that even people held in slavery can go home and have dinner with their families," he said. "We cannot."

Yoshitani can go home, of course. He can quit whenever he wants. He does not have a wife or kids to worry about. Sales of his work are accelerating. He is well on his way to becoming rich and famous. Quitting, though, would cut him off from the indignities, social failures, and drudgery that inspire his art. Besides, he says, "I genuinely like my job."