They sing, they dance, they aim to shoot a president 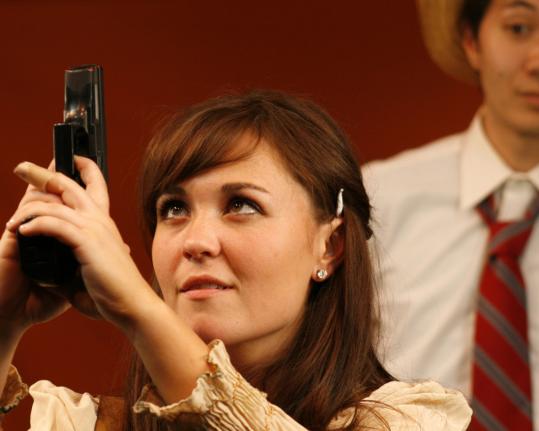 We're in the middle of a presidential campaign, the argument goes, and it's anxiety-provoking enough that the Secret Service started guarding Barack Obama earlier than any other candidate. Why on earth would a theater stage "Assassins" right now?

But people asked the same question when Stephen Sondheim and John Weidman's dark musical first opened in 1991, during the Gulf War. So maybe the question is: When, exactly, would be a good time to stage a musical about killing presidents?

But I think that's the wrong question. People can write shows about anything they want, and companies can stage whatever shows they like. The question they do have to answer is a simple one: What's the point?

In this case, for example, why does Sondheim write some clever, complex music that draws on a whole range of American styles - from blues to Sousa to light rock - about nine people who tried, some of them successfully, to shoot a president? And why does Company One, which is giving the show a spare but solid production at the Boston Center for the Arts, ask us to spend 90 minutes in a dark room with these obsessive killers?

For Sondheim fanatics, the answer is obvious: It's the music, stupid. And Company One gives the music its due, with a small but excellent band conducted by José Delgado and some very accomplished young singers. It seems strange that all of them are miked - this is a pretty small space, after all - but Aaron Mack's sound design is unobtrusive, and the voices generally blend well.

The singers mesh especially in the big opening number, "Everybody's Got the Right," in the truly weird rock ballad "Unworthy of Your Love" (sung by John Hinckley Jr. and Lynette "Squeaky" Fromme to the absent Jodie Foster and Charles Manson, respectively), and in the dissonant, dyspeptic "Another National " that brings the show to its climax.

Nik Walker, as the Balladeer, is particularly strong and charismatic. As John Wilkes Booth, meanwhile, David DaCosta has a fetchingly crazy gleam in his eye. Though his singing occasionally escalates into yelling, mostly he keeps the passion tuned to the right pitch.

And Shawn LaCount directs the entire cast with focus and contained intensity. Even the cruel-silly tone of much of Weidman's book - the ridiculous scene, say, in which Squeaky and fellow failed Ford assassin Sara Jane Moore take target practice with a bucket of fried chicken - here at least feels intentional, if not intelligent.

But it's intelligence that this show could use more of. Sondheim, as usual, displays a dazzling mastery of musical styles, along with an almost dizzying ability to chop them up and rearrange them into exciting new forms. Company One's design team, though clearly working on a tight budget, similarly evokes a range of eras and moods - sleazy carnival, revival meeting, Death Row - while also melding them into a more or less cohesive whole. And the climactic scene, in which John Wilkes Booth leads the assassins' chorus in urging Lee Harvey Oswald to pick up a rifle in Dallas, is dramatic, chilling, and stylishly creepy.

It's the ideas in the show that simply aren't smart enough. Yes, it floats some tantalizing themes: that the American Dream destroys as many people as it inspires, that the hunger for fame poisons us all, that evil is everywhere and not as strange to us as we like to pretend. But it serves up these questions without ever seriously engaging them.

Artists certainly don't have to answer all the questions they ask - I'm not looking for childish simplicity - but they do need to know what, exactly, they're asking of us. The glib nihilism of "Assassins" may leave a nasty taste, but what exactly is it asking us to swallow?

Musical with music and lyrics by Stephen Sondheim, book by John Weidman

Presented by: Company One.

At: Boston Center for the Arts Plaza Theatre, through Aug. 9.