New Harvard dean has designs on our future 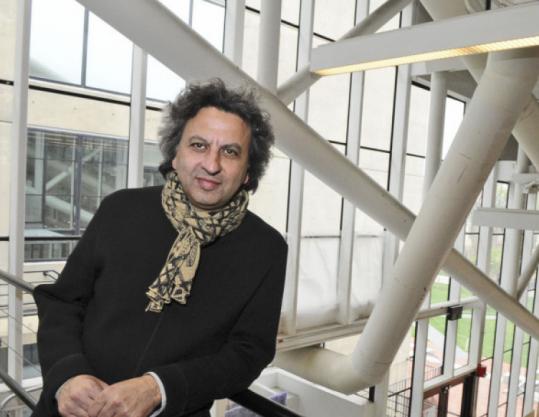 As head of the Graduate School of Design, Mohsen Mostafavi sees enthusiasm for more socially based, activist approaches. (LISA POOLE for the boston globe)
Email|Print|Single Page| Text size – + May 8, 2008

Mohsen Mostafavi, the new dean at Harvard University’s Graduate School of Design, is much more than a man who understands lines, brick, and mortar. He is a philosopher of sorts. Since arriving from Cornell, where he served as dean of the College of Architecture, Art and Planning, Mostafavi has been thinking about how his students can be futurists, meaning how they can use their tools today to plan for the cities we will inhabit in the years ahead. Mostafavi, who was born in Iran, recently chatted about his research, and his plans for the future of the school. — CARLENE HEMPEL

You were an associate professor of architecture at Harvard's Graduate School of Design in the '90s and director of the professional degree programs. How has the school changed since then? I think there's a great deal of fascination these days with more socially based, activist forms of practice. I think the students are more and more conscious of both the significance of signature architecture but at the same time, the potential alternatives to that form of practice. So, specifically, how can we be ethically responsible and also not sacrifice the commitment to design?

You're a scholar in the fields of architecture and urbanism. Everyone knows what architecture is. What's urbanism? Urbanism is really dealing with the city in its broadest sense. It really deals with the variety of issues that are connected with the urban condition. It's the way in which our cities are changing in response to global changes, in response to various conditions of production, manufacturing, agriculture. But urbanism is also, these days, something that in its broadest sense also includes appreciation of landscapes of the urban, of the role of open spaces, and not restricting the study of the city to the study of the objects that occupy the city.

When you were appointed you said you were thrilled to return to Harvard at such a pivotal moment. Why is it pivotal? I think this is a very special moment for a variety of reasons. The most obvious is really the appointment of Dr. [Drew Gilpin] Faust and the fact that with her appointment, there is the opportunity for the institution to really rethink itself, to think about itself afresh on many levels. What I sense is that there is so much enthusiasm and so much support now for the idea of one university - for the idea that we are one institution, which requires a much more collaborative approach.

You're particularly known for your studies of building surfaces and how they change over time. What does that mean? I've done a number of articles and two books about the relationship between technology and aesthetics. One of them is called "On Weathering: The Life of Buildings in Time." It is a kind of long essay that is really looking at the way in which the weather affects buildings over time. And because the weather tends to deface, to erode, to ruin the surface of the building, this creates a fundamental technical and aesthetic problem: How do you deal with the inevitability of ruination? Is it something that is all bad? Or is it something that is an opportunity? It is a discussion that you would have in art about how the appearance of things change.

Boston is so dense that there doesn't seem to be much space left for iconic buildings. Do you think architects here need to think differently about reconciling architecture and the landscape? I think that Boston is a city that has a very strong historical tradition and at the same time, because of the quality of many of the things that have been built in this city, I think the onus is on us. There is a greater pressure on us to think about what we will do tomorrow that in many respects is as good as many of the things that were done previously. And that can't be done through trying to do a sort of recollection of the past.

But some architects have experimented with contemporary design. There's the ICA on the waterfront. There's the Stata Center at MIT. And there's also been backlash against these "starchitects." I think that's unfortunate in a way because Diller, Scofidio + Renfro (who designed the ICA) and Frank Gehry (Stata Center) are practitioners that have done incredibly exciting and incredibly innovative things. I think the ICA in terms of what it is as a building and on many levels produces very special conditions. I think part of the challenge is [to] view the work as in the fields of science and medicine. You want things to advance and develop. I think the key thing is to also really respond to these buildings in terms of understanding what is at stake and where the advances are, and not just respond to them at a kind of visceral level: like and dislike. It requires a little bit of pause.

Whenever I read something from someone talking about you, he or she says you're an innovator, open to new designs and technologies. How might that manifest in your new job? One of the concrete things that I'm hoping to do is to set up an umbrella center within the Graduate School of Design, which will be called something like the Center for Alternative Futures. This is basically a center under which one could have a whole multiplicity of research and mini-centers. It's to set a tone which is to posit the world of architecture, landscape, urban planning and design into a much more projected mode of thinking.

What are you reading? I'm just starting to read a book called "Istanbul" by Orhan Pamuk, a Turkish writer. I read a lot of Ian Rankin, who is a Scottish writer of detective stories. The other things I read recently are two tiny books. One is called "On Chesil Beach," which is by a British writer called Ian McEwan. And the other is by Mohsin Hamid, "The Reluctant Fundamentalist." Both are extraordinary.

Mohsen Mostafavi, the new dean at Harvard University's Graduate School of Design, is much more than a man who understands lines, brick, and mortar. He is a philosopher of sorts. Since arriving from Cornell, where he served as dean of the College of Architecture, Art and Planning, Mostafavi has been thinking about how his students can be futurists, meaning how they can use their tools today to plan for the cities we will inhabit in the years ahead. Mostafavi, who was born in Iran, recently chatted about his research, and his plans for the future of the school. - CARLENE HEMPEL