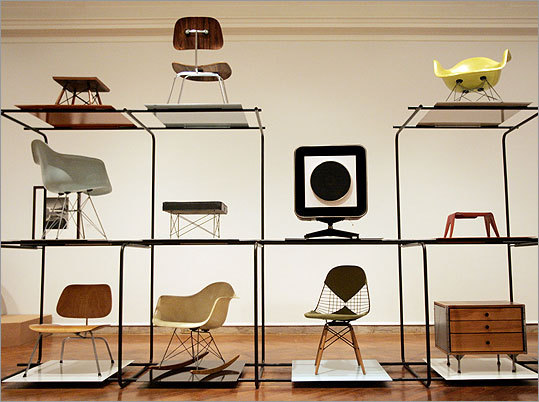 ANDOVER - Sleek and airy, with the insouciance of a 1957 Speedster convertible and loaded with more extras than you can count, "Birth of the Cool: California Art, Design, and Culture at Midcentury" has rolled into the Addison Gallery of American Art.

Named for the seminal 1950 Miles Davis recording that popularized the understated inventiveness of cool jazz, "Birth of the Cool" deftly wraps together the music, art, architecture, and design that emanated from Southern California in the 1950s and early '60s, all coalescing in the clean lines, crisp style, and hip reserve we've come to think of as cool.

Cool, of course, is as much an attitude as an aesthetic. James Bond is still a paragon of cool: Elegant, poised, and unflappable, he enjoyed himself even in the face of the Cold War and the threat of nuclear annihilation.

The Addison Gallery, with its federal architecture and ivied prep-school setting, seems like a stodgy venue for this show, which originated at the Orange County Museum of Art. It's the only East Coast stop for the exhibit, which demands a modern backdrop - the upper, skylit galleries of the Museum of Modern Art would show it off well. For all its cool, it strains against the surroundings.

But not too much. Spend an hour or two wandering through "Birth of the Cool" and you may come out feeling windblown and sun-soothed. Curator Elizabeth Armstrong speculates that California cool was, in part, a reaction against East Coast angst. New York School Abstract Expressionists such as Willem de Kooning and Jackson Pollock poured their neuroses out on canvas in drippy, muscular gestures. Bebop jazz artists such as Dizzy Gillespie and Charlie Parker did the same thing in their long, bawling solos.

Over on the more temperate West Coast, it seemed, artists created work that felt more relaxed, more serene, and more fun. World War II was over; prosperity was setting in. Why not enjoy it?

The elegant sounds of Davis, Gerry Mulligan, Chet Baker, and more roll through "Birth of the Cool" as effortlessly as Pacific surf. Sinuous harmonies lightly play off paintings and photographs. A jazz lounge, perhaps the most awkwardly conspicuous element of the installation at the ornate Addison, has been outfitted with plastic modular chairs and boasts a grid of album covers. Wonderfully intimate photos by William Claxton, such as one of a jam session in a little tract house in North Hollywood, convey the languid, easygoing spirit of California jazz.

The elements of music, painting, architecture, and design course through the show like instrumental lines in a jazz improvisation, with each rising to prominence, then dropping into the background. Two central galleries focus on furniture and design; satellite galleries house videos, a fascinating time line, and photos.

Painter John McLaughlin, perhaps in an effort to rid his art of the gnarly ego that was being splashed on East Coast canvases, sought to eliminate the self from his spare, grid-based canvases, as a Zen monk might detach from ego in meditation. McLaughlin, Karl Benjamin, Lorser Feitelson, and Frederick Hammersley, a disparate group of California painters, inadvertently cohered into a school of painting in 1959 when Jules Langsner put together "Four Abstract Classicists" for the Los Angeles County Museum.

That group, plus Feitelson's wife, Helen Lundeberg, makes up Armstrong's argument for cool art. She has curiously left out several artists who defined cool when they showed at LA's legendary Ferus Gallery in the 1950s, such as Robert Irwin and Larry Bell.

Still, these painters fit. The airy, crisp geometric canvases pinned hard-edged, colorful planes to the surface of the canvas, with only flitting hints at depth. From the lean clarity of McLaughlin's subdued work to Benjamin's dynamic, dancing shards of brilliant color, these paintings offer a sense of order and light.

These artists took inspiration from the buildings springing up around them, with their emphasis on transparent and translucent surfaces and floating planes. Architects such as Pierre Koenig and the firm of Buff, Straub and Hensman experimented with steel and other industrial materials, designing permeable homes in which glass windows and doors opened onto patios and pools, extending the living space outside.

Arts & Architecture magazine's Case Study House program touted designs suited for the average family. Julius Shulman photographed them ingeniously; his images still embody cool. Brad Pitt and Angelina Jolie restaged his photo of Koenig's Case Study House #21, with a sultry woman seated while her husband stands in the hallway behind her, for W magazine in 2005. Shulman's sparkling 1960 shot of Case Study House #22, in which two women lounge in a glass room cantilevered over the city at night, is iconic. Unlike most architectural photographers, Shulman posed people in the buildings he shot, revealing erotic heat within the cool of modern architecture.

The designers, artists, and entrepreneurs Charles and Ray Eames dominate the furniture gallery, but they were forces in nearly every medium. Their fanciful short film "Tops (From Stars of Jazz)," made to air on a favorite jazz TV show, is on view, and they, too, designed a Case Study House for Art & Architecture, which they ultimately lived in.

The couple revolutionized the furniture industry, crafting modular pieces with elegant biomorphic designs. The Eames chair that appeared in a show at the Museum of Modern Art in 1946 could appear in your living room. Several Eames pieces grace a large shelving grid here, including a couple of curvy rocking chairs and the now retro-futuristic Quadreflex speaker, a circle nested in squares set jauntily on a base borrowed from one of their ottomans.

Breezy and seemingly effortless, the cool aesthetic promoted an enviable lifestyle that was all about surface and appearance - but boy, it still has a wild allure. It's no surprise, then, that this show is broader than it is deep. That's OK. Even just dipping your toe in will anoint you, for the moment, as cool.

Birth of the Cool: California Art, Design, and Culture at Midcentury