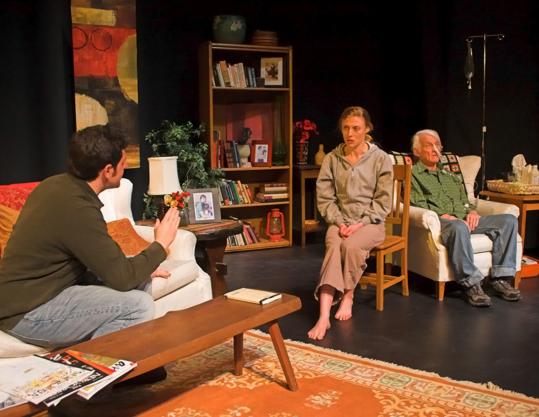 On the smaller of two stages at Boston Playwrights' Theatre, a young fringe company is presenting the regional premiere of Don DeLillo's "Love-Lies-Bleeding."

This is a strange commentary on the state of our large local theater companies, if you consider that two earlier DeLillo plays were commissioned and premiered by the American Repertory Theatre. But it's a wonderful reflection on Way Theatre Artists, which began the season by co-presenting the ambitious "Kentucky Cycle" with Zeitgeist Stage Company and now continues to extend its reach with a fluent production of this significant, if imperfect, work.

DeLillo's novels typically take on vast themes of recent American history, from the Kennedy assassination to Sept. 11; his earlier play "Valparaiso," too, was more concerned with such broad topics as celebrity culture and mass media than with the plight of its individual characters. In "Love-Lies-Bleeding," DeLillo homes in on a dying man and his family - and yet, for all its detail, the play also touches on large questions of life and death.

Alex, an artist, has had two strokes and is now in a persistent vegetative state. His fourth wife, Lia, is caring for him in their remote Southwestern home when his son, Sean, and his second ex-wife, Toinette (Sean's stepmother), arrive to discuss what's left of Alex's future.

This could be the stuff of melodrama or a morality play on euthanasia. But DeLillo takes the arguments over quality of life, free will, and our obligations to our loved ones and ourselves beyond the well-worn terrain of TV movies and magazine features. His dialogue occasionally flowers too luxuriantly to remain persuasive as the speech of actual humans, but for the most part he creates interesting, complicated characters caught in an agonizing situation.

He also uses the just-clever-enough device of showing us two Alexes: the silent, vacant man who sits immobile in a chair, and the younger one - initially as he was after his first stroke, slightly impaired and in a wheelchair, and then, with a vitality that becomes heartbreaking by contrast, as a healthy middle-age man. It's an effective way of reminding us that, as Sean and Toinette and Lia argue over how much of Alex still remains alive, each of them is struggling to reconcile these images from the past with the reality of the present.

At its best moments, too, the play invites us into the vast interior space that each of us contains. In a key scene, Toinette is talking with the healthy Alex about his dream for an ambitious artwork: He will blast a room deep in the rock of a mountain, then fill it with his paintings - and leave it there, unsigned, to be discovered and wondered at by some later civilization. Without making the connections explicit, DeLillo lets us imagine this magical room locked in a mountain as we, with his characters, try to discern what of Alex's huge spirit remains locked in his body.

Director Greg Maraio and his excellent cast keep this metaphor, and the slightly more strained one of the names of wild plants that gives "Love-Lies-Bleeding" its title, from wafting into the pretentious ether by grounding the play firmly in precisely observed gesture and physical detail. The handsome living-room set, designed by Maraio, feels right as the home of a difficult but gifted artist, complete with paintings and books; it's also flexible enough to accommodate the less naturalistic coexistence of two Alexes onstage at once.

Jeff Gill brings a grumpy energy to the younger Alex, while W. Kirk Avery manages to infuse the vegetative older one with a mysterious but undeniable presence. Brett Marks is appropriately abrasive as Sean, the least persuasively written character of the lot, and Maureen Adduci brings earthy warmth to Toinette.

Best of all is Eliza Lay as the much younger wife, Lia. Something about Lay's acting makes you forget that she's acting. She has a compelling presence onstage, and yet she's also utterly natural. It's too bad DeLillo couldn't get a larger Boston theater to follow Chicago's Steppenwolf in staging "Love-Lies-Bleeding" - and it's really too bad that this short run ends tomorrow - but he's lucky to have such a dedicated and skillful young company give it their all.