She gives Shakespeare's women a workout 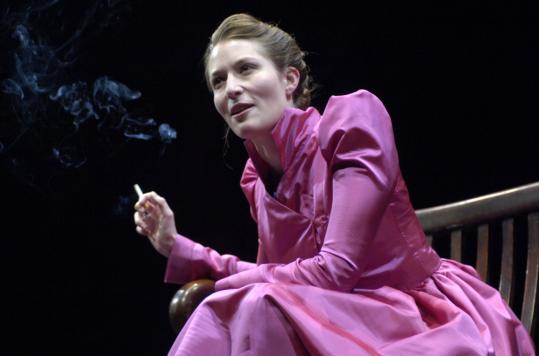 "Shakespeare's Actresses in America" is a fascinating piece of scene study. For actress Rebekah Maggor, who is performing an updated version of the one-woman show she previously presented at the American Repertory Theatre and Wellfleet Harbor Actors Theater, it's a wonderful opportunity to showcase her flawless vocal technique and her command of the physicality of famed actresses in performance.

In this 70-minute work, now at the Wimberly Theatre in the Boston Center for the Arts, Maggor presents a collection of actresses' interpretations of Shakespeare's women, ranging from Juliet to Lady Macbeth. Maggor draws from American theater history, starting with 19th-century actress Julia Marlowe and moving up through Mary Pickford, Uta Hagen, and Kathleen Turner. An introduction to each scene and each actress is provided by Maggor as a narrator, Margaret Webster, the legendary director, actress, and Broadway producer who mounted the first American production of "Othello" starring an African-American actor, Paul Robeson.

Karin Coonrod has been added to this production as director, but not having seen the production before, it's difficult to know how much she contributed, since so much is dependent on the pure intensity of Maggor's performance. The lighting design of Brian Scott certainly creates appropriate dramatic effects, as does Tony Geballe's sound design, but Maggor's work with voice and text director Dudley Knight are what give these interpretations life. Her various accents and vocal inflections are always precise without being overwrought, and her delineation of actresses' voices and movements are specific and distinct.

But for a general audience, "Shakespeare's Actresses in America" is a bit of a tease. While it's impressive to hear Maggor nearly sing Juliet's balcony speech in the style of Marlowe, capture Claire Danes's shrug and slouch through the same scene in Baz Luhrmann's film version, hear Celia Adler's emotional take on Desdemona in Yiddish, or witness Sarah Bernhardt's grand gestures for Hamlet's "To be or not to be" soliloquy in French, the piece drifts too far toward academic exercise. It's scrupulously researched and played with remarkable focus, but to what end?

Ultimately, the most fascinating character is Webster. When she relates the emotional journey of bringing "Othello" to Broadway in 1943, with the first performances at the Brattle Theatre in Cambridge, I want to hear more about this feisty and formidable woman. And when Maggor turns to Webster and then Helen Hayes's performances as Viola in "Twelfth Night," it is easy to imagine the passion and sincerity Maggor might bring to a Viola of her own.

Maggor delivered a stunning performance in the Boston Playwrights' Theatre production of "King of the Jews" last year and in 2006 was named a Huntington Theatre Playwriting Fellow. "Shakespeare's Actresses in America" is a lovely introduction to her talent, and we can only hope to see more fully realized performances in the future.

Created and performed by

At: Wimberly Theatre, Boston Center for the Arts, through Feb. 11.