Killing off Santa may be an extreme reaction to holiday stress, but for Hilary Price, the dramatic move opened up new possibilities.

Price writes the amusingly offbeat comic strip "Rhymes With Orange," which has been running daily in the Globe for more than a decade, and she says her own holiday stress was channeled into a strip in which someone tries to spice up a Christmas play by murdering Santa.

"After I wrote it, I thought, 'how could it happen?' " she says from her home near Northampton. "We don't know that much about the people around Santa. I wanted to know what we don't know about Santa that would make someone want to kill him. I realized this is much bigger than a three-panel strip and had to find a way to tell the story."

Price turned to actor and writer Kelsey Flynn, a DJ at WRSI in Northampton, to help flesh out the drama. The result of their three-year collaboration is "Santacide," a full-length comic whodunit that starts with the death of Santa. The play will be performed tonight through Sunday at Northampton High School in a benefit for New Century Theatre.

For Price, the challenge involved expanding the story from her tightly woven comic strips. "Both of us write comedy," she says, "but playwriting is something new. I don't use characters in the comic strip. It's all situational, so developing characters who tell the story is a new direction for me."

Immediately, says Flynn, they started creating back stories for Santa's intimate social circle. "It was easy to imagine Mrs. Claus with a drinking problem," says Flynn, "and Roger, the officious mailman who resents carrying all those letters to the North Pole, who also happens to be Mrs. Claus's first husband. Then there's the slightly dotty Head Elf, his first assistant Milo, and Holly, the mute stable girl. We went for big and broad comedy. Before you know it, everybody's a suspect."

Price is quick to point out that the Santa of their story is not "your typical mall Santa. This guy's got issues. If only he'd turned to psychotherapy a little sooner."

Although Price and Flynn had never written together before, they said they focused on plot development when they met and then wrote scenes separately before finding ways to link them together.

"We're both good with jokes and one-liners," says Price. "So we could finesse each other's scenes and then work on the next one together."

Once they got going, the duo watched every Agatha Christie murder mystery they could get their hands on. "I think of comedy as math," says Price, "something plus something equals a laugh. But a whodunit is higher math. It's algebra, because if X is in the room and Y leaves, how do you solve for Z?"

Keeping track of where all the characters were at any given moment became a little tricky, but Flynn says, "Hilary came up with a cardboard model of the room where the action takes place with doors and characters on clothespins. When we were writing, we'd have famous actors in mind to play particular characters. I was most inspired by having Kathleen Turner play Mrs. Claus, but we haven't had the nerve to call her."

Both Price and Flynn are quick to say "Santacide" is not family-friendly holiday fare. "It's not for the under-12 set," says Price, "but we do think it will make audiences laugh."

Three world premieres, a new theater, a national tour, and a season that extends from May through March are all part of Lenox-based Shakespeare & Company's plans for 2008-09.

One of the highlights of the season will be the opening next summer of the company's new Elayne P. Bernstein Theatre, a 155-seat theater that is part of Shakespeare & Company's new performing arts center. The first production there will be two invitation-only performances of "Shirley Valentine" (July 12 and Aug. 16), starring Shakespeare & Company founder and artistic director Tina Packer, followed by the world premieres of "The Goat Woman of Memphis" (July 31-Aug. 31) by company member Christine Whitley and a new adaptation of the Oscar Wilde story "The Canterville Ghost" (Sept. 12-Nov. 9) by associate artistic director Michael Hammond and award-winning director Irina Brook. Company favorite Elizabeth Aspenlieder will star in Theresa Rebeck's one-woman play "Bad Dates" in January 2009. The entire performing arts center is not expected to be ready until later in 2009.

The company's acclaimed production of "Hamlet," starring Packer as Gertrude and her son Jason Asprey in the title role, will be mounted on a national tour set to travel to Virginia, California, and several other states. This is the first time the company has created a touring production on this scale.

The first production at the Founders' Theatre will be "The Ladies Man" by Charles Morey, adapted from Georges Feydeau's "The Ladies' Dressmaker" (May 28-Aug. 31). Packer returns to the Founders' Theatre to direct "All's Well That Ends Well" (June 20-Aug. 31) while John Douglas Thompson, currently on Broadway in "Cyrano de Bergerac" and familiar to Trinity Repertory Company and American Repertory Theatre audiences, will star in "Othello," directed by Tony Simotes (July 18-Aug. 31). The outdoor Rose Footprint Theatre will feature the world premiere of "The Mad Pirate and the Mermaid," written and directed by company member Michael Burnet. 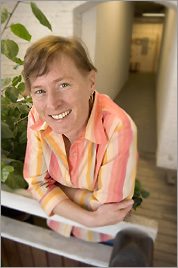 Hilary Price toyed with the death of Santa.