Behind doors, a world unseen 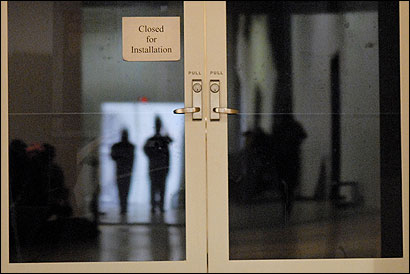 NORTH ADAMS -- Building 5 at the Massachusetts Museum of Contemporary Art is made for big shows, but the football-field-size space has never seen anything quite like what Swiss artist Christoph Büchel has brought inside. There's an oil tanker, a smashed police car, a used mobile home, deactivated bomb shells, nine shipping containers, and a two-story house that was lifted out of the ground, sliced into four pieces, and put back together. Not to mention the shuttered local movie theater, which was rebuilt, down to its worn red seats, for Büchel's massive show, "Training Ground for Democracy."

But because of a dispute between Mass MoCA and the artist -- over money and the installation of the work -- the public may never see what has been touted as Büchel's first major American museum show. The December opening was postponed, and just before Christmas the artist walked out after being told the museum had spent its $250,000 project budget. So far, Mass MoCA has been unable to lure Büchel back.

As a result, the museum's most celebrated gallery space remains a virtual ghost town -- though a very crowded, very gritty one at that. And if Büchel's list of complaints is any indication, it may be a while before the dispute is resolved.

"I want to explore every option for providing Christoph with what he feels he needs," Mass MoCA director Joseph C. Thompson said this week. "Having said that, projects have timelines and budgets, and the museum has the responsibilities to the next 70 artists coming down the pike."

Büchel, who has been scrambling to install shows in London and Paris as the Mass MoCA impasse continues, has steadily declined to be interviewed. This week, after several inquiries, he had his New York gallery provide the Globe a seven-page statement detailing a litany of complaints about the museum.

The statement includes demands sent in a letter to the museum in January. Among them: a request for more money and insistence that there be "NO negotiation about the scope of the project."

Thompson declined to speculate what would happen if Büchel doesn't return to finish the installation. But the delay hasn't stopped museum officials from showing off the unfinished project. Last month, museum directors and curators attending an arts conference in the Berkshires were led on a tour through Building 5. North Adams Mayor John Barrett III has been in twice, and in January, he brought along Governor Deval Patrick.

"It's art at its craziest," Barrett said this week. "Imagine moving a house into a gallery."

With its 13-acre campus, Mass MoCA has more exhibition space than any contemporary arts institution in the country, and Building 5 has been home to some of its most dramatic shows. For one, an artist suspended nine Ford Taurus sedans from the ceiling. Most recently, German artist Carsten Holler hauled in five amusement park attractions, including bumper cars and a flying saucer ride.

"This is the kind of thing we live to do -- it's part of our DNA," Thompson said of the massive installations, which very few museums would have the room to display .

Büchel creates what curators describe as "hyper-realistic" installations, meaning that visitors are supposed to forget they're at an exhibit. In 2003, he went so far as to have a Los Angeles art space's storefront boarded up to make it appear the building had been shut down.

Inside, he crafted a multiroom installation in which visitors, after encountering the stench of real garbage stacked in a front room, could walk through the back of a rusty locker and a hole kicked in a wall to get to the final destination: a waiting room stuffed with deactivated missiles.

"It was not like a theatrical set," said Bridget DuLong, managing director of Los Angeles Contemporary Exhibitions, a nonprofit that programs the space. "It was completely believable. This was in the period of time we were looking for weapons of mass destruction. Well, they were here on Hollywood Boulevard."

The Mass MoCA show aimed to create an imaginary American neighborhood with sharp references to life during wartime. In his statement, Büchel estimated it is only 50 percent complete. He took issue with curators' decision to let outsiders see a work still in progress, which he said violates a verbal agreement.

The artist also said the museum failed to acquire the materials he needed in a timely fashion, and miscalculated the project's budget.

For example, to get some objects inside, Mass MoCA had to spend $45,000 installing a 12-by-24-foot door on Building 5. But the door will remain after the show closes, and be of use to Mass MoCA, so it shouldn't be added to the show's cost, Büchel wrote.

Also, the artist disagreed with the museum's decision to spend about $100,000 buying and moving the two-story house. Büchel said he could have found another house for less.

"The institution proved not to be capable -- neither logistically, neither schedule -- nor budget-wise to manage the project," Büchel said in his statement. "The museum treated the project as though it was the artist's wish list for Christmas, eliminating necessary and key elements that were always listed as part of the artwork from the beginning."

Büchel and Mass MoCA did have an agreement outlining the scope, timing, and budget for "Training Ground," Thompson said. But that agreement did not list exactly which objects would be in the space, or who was responsible for gathering the materials.

"The truth is, it's a highly collaborative, fluid process in which the elements changed over time," Thompson said. He pointed out how hard the museum worked to realize the artist's vision, which included hanging an airplane engine.

"Did we get the 727 fuselage, blown up, burned, and suspended in the gallery as he had asked?" he said. "Well, that one we couldn't come up with. But we looked into it."

Thompson defended his right to bring "friends of the museum, potential supporters, and colleagues" through the exhibit. "Museums have behind-the-scenes tours all the time," he said.

Other curators and gallery managers who have worked with Büchel describe him as very particular about his work. "When you visit his installations, you have the whole story being told," said Giovanni Carmine , a friend of Büchel's and director of the Neue Kunst Halle gallery in Switzerland. "Every detail matters."

It's unclear whether Mass MoCA can open "Training Ground for Democracy" without Büchel's consent. Michele Maccarone, a prominent New York gallery owner who represents the artist, said Büchel would be shocked if that happened.

But Barrett said he has no doubt the installation will open. "It's just a matter of time," he said. "It has to be open before the summer season."

Holly Block , director of the Bronx Museum of Art, was among the art-world officials who toured the show last month. "Open it anyway, as it is," Block said she told one of the curators. "Show it as a work in progress."

"You wouldn't open a show of paintings if all the paintings are not on the wall," he said.

Geoff Edgers can be reached at gedgers@globe.com. For more on the arts go to boston.com/ae/ theater_arts/ exhibitionist.