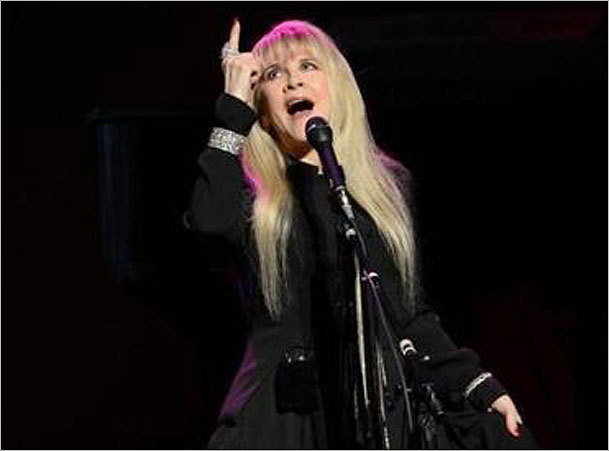 The twirls may be a little slower these days, but the spirit remains strong.

Tuesday night at the Bank of America Pavilion, Stevie Nicks enchanted with a two-hour set that was part “Storytellers,” part patriotic tribute, part crystal visions, and all heart.

The show was heavy on tracks from her latest album, 2011’s splendid “In Your Dreams,” which may have been unfamiliar to some in the packed house, but Nicks was a savvy sorceress of sequencing.

The Fleetwood Mac chanteuse wisely prefaced new tunes with stories about their origins to provide a way in and alternated fresh tracks with big hits, engendering good will.

That meant that Fleetwood Mac’s “Dreams” — still retaining its warm, woozy charm — flowed nicely into “Moonlight (A Vampire’s Dream)” — which Nicks explained began life in the early ’70s and was resurrected when she was inspired by the second “Twilight” film — which then segued easily into a churning, spectral, wailing “Gold Dust Woman.”

That tune was followed by Nicks’s reverie “Soldier’s Angel,” inspired by her trips to visit injured soldiers. Nicks brought one such soldier named Vincent, who managed a miraculous recovery, onstage with his family for a poignant and rousing ovation.

She pivoted back into rocking action with “Stand Back.” Backed by an airtight eight-piece band, including longtime guitar foil-musical director Waddy Wachtel and indispensable backing vocalists Sharon Celani and Lori Perry, Nicks was in high spirits all night, bouncing from the Mac catalog to her solo repertoire and a cover of Led Zeppelin’s “Rock and Roll.”

Declaring that she would never do another strictly “greatest hits” tour, Nicks was clearly jazzed to be playing new material. That sense of reinvigoration permeated the whole set, and because the performances were so strong — from a tender “Landslide” to the lilting new tune “For What It’s Worth” to a muscular “Edge of Seventeen” — she had the audience eating out of her sparkly, fingerless-gloved hand.

Smoky-voiced opener Marc Cohn warmed up the crowd with hits like “Walking in Memphis” and a touching tribute to the late Levon Helm, “Listening to Levon.”