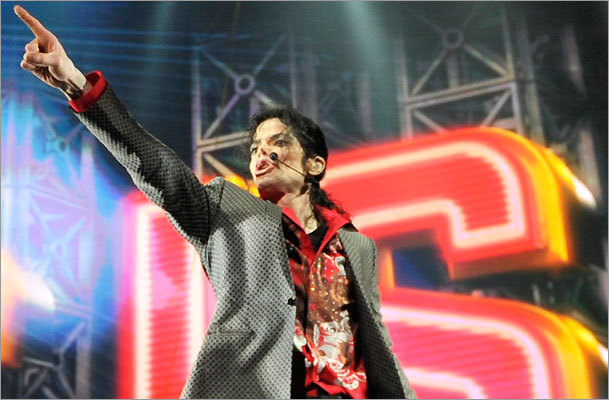 Michael Jackson has been buried. The late 'King of Pop' was laid to rest at the Forest Lawn Memorial Park last night (03.09.09), in a ceremony attended by his family and a host of celebrity friends. (BANG Showbiz, 9/4/09)

The self-titled King of Pop was given the kind of dignified farewell - and wall-to-wall media coverage - usually reserved for nobility.

A look back at Michael Jackson

The songs that made him famous

The Los Angeles County coroner's finding that the death of Michael Jackson was a homicide could mean criminal charges for his doctor. (AP)

VIDEO - CNN has footage of Michael Jackson's final rehearsals for what would have been his big comeback shows in London. Looks like he still had the magic touch, too. (Boston Globe, 7/2/09)

New Jackson music in the vault

NEW YORK - Michael Jackson had a mountain of unreleased recordings in the vault when he died - music that is almost certain to be packaged and repackaged for his fans in the years to come. (Associated Press, 7/2/09)

BET homage to Jackson had its moments but failed to stir

What do you get when you cross a Michael Jackson tribute with the BET Awards? Last night, you got a disjointed event that, alas, didn’t quite evoke the spirit of the late King of Pop. (By Matthew Gilbert, Globe Staff)

For blacks, Jackson's struggles mirrored their own

Loving Michael Jackson - his artistic genius and the many trails he blazed - has often meant looking the other way when it came to his appearance. (By Wesley Morris, Globe Staff)

How Michael Jackson helped save the Patriots

Patriots owner Robert Kraft got a bargain on the team's stadium after the previous owner went bankrupt funding a Michael Jackson tour. Kraft still keeps a photo of Jackson on his desk. (Boston Globe)

Michael Jackson, the child singer who became the world's biggest pop star before his personal life became grist for the tabloids, died at the age of 50. (Globe Staff, 6/26/09)

Many in Boston are stunned, stirred to tears by star’s death

Tears, shock, and surprise were just a few of the reactions around the city last night as the news spread almost instantly of the death of Michael Jackson, the self-proclaimed “King of Pop.’’ (Globe Correspondent, 6/26/09)

Michael Jackson was due to make his triumphant return to the stage in London next month -- but instead his sudden death has left millions of fans feeling they've lost a lifelong friend. (Associated Press Writer, 8/25/09)