Adam Yauch of the Beastie Boys dies at 47 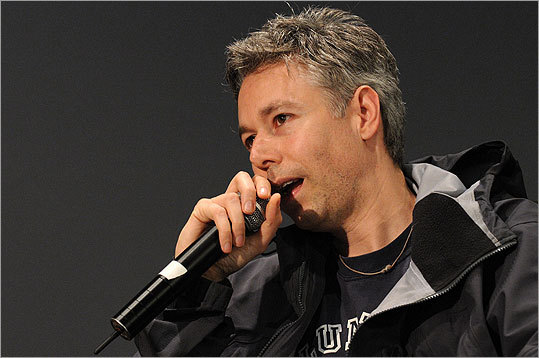 (Bryan Bedder/Getty Images) FILE: Filmmaker and recording artist Adam Yauch speaks onstage at the Apple Soho store on May 2, 2008 in New York City. Rapper Adam Yauch, AKA MCA, of the Beastie Boys has died May 4, 2012 after battling cancer. He was 47.
By Jake Coyle AP Entertainment Writer / May 4, 2012
Text size – +

NEW YORK—Adam Yauch, the gravelly voiced rapper who helped make the Beastie Boys one of the seminal groups in hip-hop, died Friday. He was 47.

Yauch, also known as MCA, died in New York after a nearly three-year battle with cancer, his representatives said. He had been diagnosed with a cancerous salivary gland in 2009.

At the time, Yauch expressed hope that it was "very treatable," but his illness forced the group to cancel shows and delayed the release of their 2011 album, "Hot Sauce Committee, Pt. 2."

He hadn't performed in public since 2009 and was absent when the Beastie Boys were inducted into the Rock and Roll Hall of Fame last month.

Yauch was an integral, founding member to the ever-weaving trio: three Jewish kids from New York who found widespread respect in a hip-hop world with few credible white performers.

In a 25-year span that covered four No. 1 albums and more than 40 million records sold, the Beastie Boys played both prankster and pioneer, a groundbreaking act that helped bring hip-hop to the mainstream.

"The group's music crossed genres and color lines and helped bring rap to a wider audience," said Neil Portnow, president of the Recording Academy. "Yauch was an immense talent and creative visionary."

The demure, gray-haired Yauch wasn't the most boastful B-Boy; he was the thoughtful one and a steady source of the trio's innovative spirit. A devoted Buddhist, he led the group in performing concerts to benefit Tibet, and, as a filmmaker, he helped grow their imagery.

The rapper Q-Tip, a member of another major `90s New York hip-hop group, recalled that the Beastie Boys "showed us the ropes." Sean "Diddy" Combs called Yauch "a true pioneer and a creative force who paved the way for so many of us." The rapper Nas lamented the loss of a "brother."

"I think it's obvious to anyone how big an influence the Beastie Boys were on me and so many others," Eminem said. "They are trailblazers and pioneers and Adam will be sorely missed."

In a letter from Yauch read by fellow Beastie Adam "Ad-Rock" Horovitz at the Rock and Roll Hall of Fame induction, Yauch recalled their early days at his parents' home in Brooklyn, "where we used to practice on hot Brooklyn summer days after school, windows open to disturb the neighborhood."

The group became a hip-hop trio soon after Horovitz joined and coalesced after Yauch dropped out of Bard College two years into his studies. They released their chart-topping debut "Licensed to Ill" in 1986, a raucous album led by the anthem "(You Gotta) Fight for Your Right (To Party!)". It was the first hip-hop album to top the Billboard chart.

"Adam was incredibly sweet and the most sensitive artist, who I loved dearly," Russell Simmons, whose Def Jam label released "Licensed to Ill," said on his website.

Their follow-up, 1989's "Paul's Boutique," ended any suggestion that the group was a one-hit wonder. Extreme in its sampling and thoroughly layered, the album (produced by the Dust Brothers) was ranked the 156th greatest album ever by Rolling Stone magazine in 2003.

The Beastie Boys would later take up their own instruments -- a rarity in hip-hop -- on the album "Check Your Head" and subsequent releases. Yauch played bass.

On "Pass the Mic," he rapped: "If you can feel what I'm feeling then it's a musical masterpiece / If you can hear what I'm dealing with then that's cool at least / What's running through my mind comes through in my walk / True feelings are shown from the way that I talk."

For many, the Beastie Boys' lyrics -- overflowing torrents of wit, humor and rhyme -- were always the main draw. While other forms of hip-hop celebrated individualism, the Beastie Boys were a verbal tag team. Yauch once rapped, "on the tough guy style I'm not too keen."

Their popularity perhaps peaked with 1994's "Ill Communication," which spawned several of their most famous music videos, including "Sure Shot" and the Spike Jonze-directed "Sabotage" -- a hit highlighted by Yauch's bass solo.

Yauch used the group's growing fame to attract awareness for Tibetan Buddists. He founded the Milarepa Fund to promote activism for Tibet in defense of what the nonprofit considered China's occupational government.

In 1996, Yauch and Milarepa produced a hugely popular benefit concert for Tibet in San Francisco, which was followed by more concerts over the next decade.

"He was a goofball and behind a lot of their prankiness, but if you wanted to talk to him about what was going on in the world and social issues and everything, you got a totally different guy," said Rick Krim, executive vice president of music and talent relations at Vh1.

"The Beastie Boys are indeed three bad brothers who made history," Chuck D said. "They brought a whole new look to rap and hip-hop. They proved that rap could come from any street -- not just a few."

Yauch also went under the pseudonym Nathanial Hornblower when working as a filmmaker. He directed numerous videos for the group, as well as the 2006 concert film "Awesome: I F-----' Shot That!" and the basketball documentary, "Gunnin' for that (No.) 1 Spot."

Yauch is survived by his wife, Dechen Wangdu, and his daughter, Tenzin Losel Yauch.