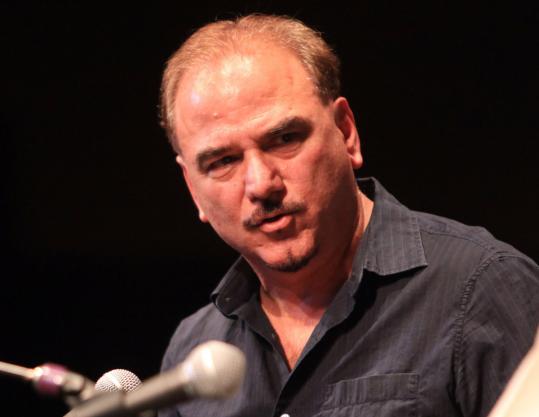 Among the pieces performed by the BCMS were selections from “Knickknacks’’ by George Tsontakis. (Michael Falco for The New York Times/File 2010)
By Matthew Guerrieri Globe Correspondent / August 29, 2011

CAMBRIDGE - There is a part of the classical-music world that has for so long made a desperate attempt to cast off the art’s perceived starchiness that the desperation has become as traditional as the starch. And then there is the Boston Chamber Music Society, which, like an enduring fine-dining monument, maintains old-fashioned ways at such a high level that one is reacquainted with their virtues.

Saturday’s concert, the last of BCMS’s summer series at Longy’s Pickman Hall, followed a predictable programming pattern: a contemporary hors d’oeurve followed by entrees of 19th-century standards. The tuxedos were pressed, the applause was ritually withheld between movements. But formality doesn’t always create distance, sometimes it collapses it; the thoughtfulness and accomplishment of the playing was consistently stimulating, even when a garnish or ingredient wasn’t exactly to one’s liking. It was enough to draw a healthy crowd, even in the face of an approaching hurricane.

Violinist Steven Copes and violist Maiya Papach presented the first course, selections from George Tsontakis’s “Knickknacks,’’ a polystylistic anthology of short duos. The music tries out various roles - minimalist cheer in “Shuffling,’’ Latin drama in “Fandango Façade’’ - but most of the pieces revealed a core of sinuous, austere counterpoint. (Only “Bumpkinesque,’’ a fiddle-powered engine revving hard in second gear, defied the pattern.) Copes and Papach, fellow principals in the St. Paul Chamber Orchestra (where Copes premiered Tsontakis’s Second Violin Concerto a few years ago), had ample flair to set off the more sober passages.

Ronald Thomas, BCMS’s emeritus director, was joined by pianist Benjamin Hochman for the Opus 38 Cello Sonata of Johannes Brahms. It is a youthful piece, at least by the self-critical Brahms’s standards. Thomas and Hochman seemed eager to connect the music to even earlier influences: Schumannesque lieder, Haydnesque lissomeness. Brahms was flexing his mastery of forms bequeathed by history - sonata, minuet, fugue - but the unhurried, slow-burn performance downplayed structural mass in favor of pointing out graceful outlines and details. Their sound contributed: Thomas’s fine-drawn tone, gauzy and deep in the bass, wiry and buzzy up high; Hochman’s classical lightness, gliding over the top of the keys rather than digging in. One might have wished for more gravity in the fugal Allegro finale, which instead came out preciously crisp.

But Hochman’s persistent polish was perfect for Gabriel Fauré’s Opus 15 Piano Quartet, another statement of grandly emotive youth, in which the piano’s role is essentially iridescent; Copes, Papach, and Thomas spread rich, heavy cloth, which Hochman embroidered with silvery crewel. The Quartet’s expansiveness demands architectural intelligence and heady perfume, and this reading delivered on both counts: high-powered conversation, intricately indulgent. To spend time in such old-school, refined company is a fleeting pleasure, but, then again, aren’t they all? BCMS makes a welcome habit of maintaining timeless oases.