At Tanglewood festival, new music takes over the spotlight 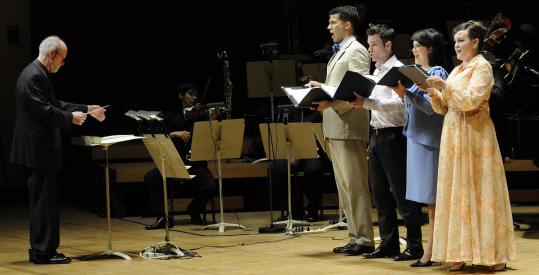 Charles Wuorinen lead a world premiere performance of his work, “It Happens Like This,’’ for four singers with chamber ensemble. (Stu Rosner for The Boston Globe)
By Jeremy Eichler Globe Staff / August 5, 2011

LENOX - Every summer at Tanglewood, for a few enticing days, the fringes become the center and an adventurous audience convenes in Ozawa Hall for the Festival of Contemporary Music. This year’s festival is being directed by the composer Charles Wuorinen, often grouped with high-modernism’s old guard. But the programs are at least somewhat generationally and stylistically diverse.

Fred Ho’s newly commissioned “Fanfare to Stop the Creeping Meatball!’’ is a short, swinging, and extroverted curtain-raiser for two trumpets and two trombones, and Wuorinen has placed it as a kind of call to order before most of the concerts, including Wednesday night’s opener, which was otherwise devoted to two Wuorinen settings of poetry by James Tate. The first, “Never Again the Same,’’ was a pithy vocal-instrumental duo for bass (David Salsbery Fry) and tuba (Jose Martinez Anton), full of deft vocal writing underscored by the tuba’s playful commentary and daubs of color. But the evening’s main event was the premiere of Wuorinen’s “It Happens Like This,’’ a new cantata built from settings of seven Tate poems, and scored for four singers with chamber ensemble.

The piece (staged by Ken Rus-Schmoll), came together wonderfully, as Wuorinen’s fractured and spiky style finds improbable kinship with Tate’s witty and urbane poetry. Several of the poems use the animal world to hold a mirror to human quirks and frailties. “The Promotion,’’ for instance, tells of a speaker pining away for his former life as a dog, set by Wuorinen as a modernist-antique madrigal. At every turn, the cantata’s vocal and instrumental writing seemed to catch the absurdist charm and fleeting pathos of Tate’s originals. The ensemble playing under Wuorinen’s direction was shapely and sensitive and the excellent singers were Sharon Harms, Laura Mercado-Wright, Steven Brennfleck, and Douglas Williams.

Last night’s densely packed program, after a reprise of Ho’s “Fanfare,’’ began with Tobias Picker’s sharply gestural Sextet No. 2 and continued with Jason Eckardt’s “Rendition’’ for bass clarinet and piano, a piece made mostly from still dark pools of tone and an interlude of violent concision. Ferneyhough’s imposing “Terrain’’ - essentially a hypercomplex violin concerto - proved at once pulse-quickening and inscrutable. Violinist Christopher Otto played with muscularity and conviction.

After intermission, cellist Fred Sherry gave a lucid account of Babbitt’s intricately woven “More Melismata,’’ here performed in the composer’s memory. The mood then shifted with John Chowning’s “Voices’’ for soprano and electronics, in which a live singer wanders through a series of reverberant, computer-generated soundscapes. Amy Petrongelli was the fine soprano, singing texts designed to evoke the Oracle of Delphi in an imagined ancient Greece.

The concert wrapped up with the premiere of Zorn’s “À Rebours,’’ a new cello concerto composed in memory of Gyorgy Ligeti and vividly scored for nine players including an elaborate battery of percussion. The writing is densely imagined, frenetically paced, and viscerally charged. Sherry was again the capable soloist. Brad Lubman conducted the premiere, and earlier led members of his Ensemble Signal. Those musicians, the Tanglewood Music Center fellows, and the New Fromm Players did the heavy lifting in these exemplary performances.