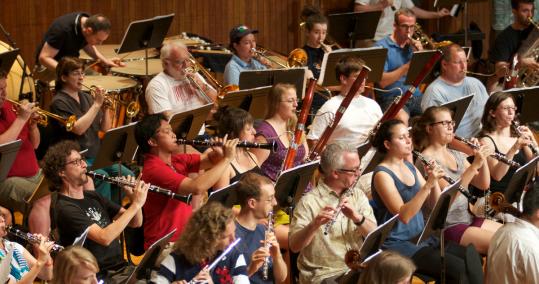 Members of the woodwind, brass, and percussion sections at a rehearsal of the Mercury Orchestra. (Richard West/Mercury Orchestra)
By David Weininger Globe Correspondent / July 22, 2011

For the last four years, the Mercury Orchestra has led a Brigadoon-like existence, convening once each summer for four weeks of rehearsals and a single concert at Harvard’s Sanders Theatre. The ensemble focuses on large-scale orchestral works of the 19th and early-20th centuries. And then it disappears, with plans to reassemble next year when the heat and humidity rise, and much of the city’s orchestral action has headed west to (literally) greener pastures.

Yet the group must be doing something right. Last year the Mercury and its music director, Channing Yu, were awarded the American Prize in Orchestral Performance in the community orchestras division. The judges singled out the “obviously careful and thoughtful preparation’’ of Mahler’s Fifth Symphony, which the Mercury performed in 2009. Tomorrow, the group offers the same composer’s Sixth Symphony, a masterpiece of unremitting darkness.

Yu cofounded the Mercury with Justin Albstein, who is now its general manager. The two met at Harvard University in 2006. The ensemble grew out of the rhythms of Boston music life: As the Boston Symphony dispatches to Tanglewood, most of the area’s other orchestras shut down for the summer. In part, the Mercury is “a place for people from those various orchestras to play some serious orchestra music during the summer,’’ said Yu by phone earlier this week. Among the orchestra’s 105 players this summer - all of whom volunteer their services - are members of the Boston Civic Symphony, the New England Philharmonic, the Lexington Symphony, and other groups.

It seems like an odd model for an orchestra - a bunch of musicians, many of whom are busy and have other jobs, willingly submitting to four weeks of twice-weekly rehearsals to play a single concert for no compensation. If this seems idealistic, that’s exactly what Yu finds appealing about it.

“It’s an all-volunteer orchestra,’’ he said. “People are there only because they really want to be there. It’s really thrilling to be in a group of musicians where everyone’s so dedicated to it. And their free time is very, very valuable.

“On the flip side, as a conductor, I have to be really efficient in rehearsing, and really provide something that’s meaningful,’’ he continued. “I have to be very conscious to make the best use of their time. People are engaged fully, and that’s what we ask of them.’’

In fact, that engagement seems to be the group’s sole reason for being. In an age where orchestras are looking for ways to set themselves apart, the Mercury, in something of a throwback to an earlier age, sets its sights on the heart of the orchestral canon and proudly declares itself to be only about the music.

“There isn’t really anything gimmicky about us,’’ said Yu. “We start with the music, we work really hard to figure out what the composer wanted, and we try to execute that to the highest standards. And for us to really spend quality time with these great works - we learn about each other, it changes us. And that in itself is unique enough to engage audiences.’’

Mahler: Symphony No. 6 in A minor