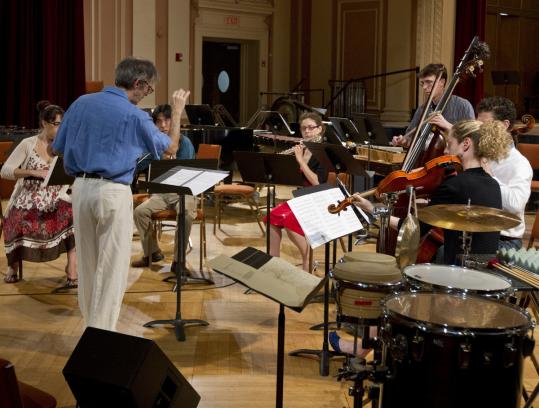 As more new music wilderness gets charted, the Sick Puppy Iditarod gets longer. The annual student-performance (plus guests) finale to the Summer Institute for Contemporary Performance Practice (SICPP) has always been casually epic, the sort of concert that can program a musical monument almost in passing. (This year it was Steve Reich’s “Music for 18 Musicians,’’ 60 minutes of aggressive percolation that commenced around 9:15.) But this Iditarod pushed past midnight into Sunday, a 10-hour course.

The expanded landscape, perhaps, reflected the presence of French composer Tristan Murail, in residence at SICPP this summer, with five works on Saturday’s bill. Murail likes to get inside musical sound, dismantling it and unhurriedly regarding the components. But he does so with sensual precision, amply evident from 1974’s “Transsahara Express,’’ dark, soft daubs given smooth varnish by bassoonist Christopher Watford and pianist Ingrid Lee, to “Lachrymae,’’ a six-player, slow-motion ululation premiered earlier in the week, and reprised under the direction of SICPP director Stephen Drury.

Old-guard repertoire dated to 1948 (Elliott Carter’s Cello Sonata, performed by Lee and pianist Christina Wright, and sounding almost nostalgic in this context); classics from the 1950s and ’60s offered provocations both clement and severe. In Feldman’s “Two Pieces for Three Pianos,’’ a SICPP favorite, Maribel Hernández Tagle, Todd Moellenberg, and Asher Severini puffed muted, dissonant clouds. Karlheinz Stockhausen was represented by the atom-smashed jazz of “Kreuzspiel’’ (conducted by Jeffrey Means) and the dispersed metallic shimmer of “Refrain’’ (Wright joined by Jo Zhou on celesta and Christian Smith on percussion) — the latter foreshadowing much of the concert’s sound-world. And Lukas Foss’s “Paradigm’’ turned the line between avant-garde music and performance art into a trip-wire for increasingly absurd booby-traps.

Like much of the music, “Paradigm’’ was amplified — as with the Reich, to facilitate balance. Others molded the signal; music by fellows in SICPP’s Electronic Workshop used live performance as source material for computer-controlled transmutations. (Simon Hanes’s “Regiomontanus’’ was particularly fine, Franziska Huhn’s harp triggering a glittering hall of mirrors.) Here, too, Murail was an exemplar; his “Winter Fragments,’’ conducted by Julia Tai, electronically opened out a sextet into gorgeous, deep-focus, prismatic topography.

True to SICPP’s penchant for invitation, as the hours passed, the music seemed to become more ruminative, more beguiling. The marathon closed with a meditation: John Cage’s “Ryoanji,’’ implacably sparse tolling drums (Kolega), an oboist (Anne Goldberg) trading bent-note aphorisms with her own prerecorded shadow, the Iditarod drifting off into the predawn.