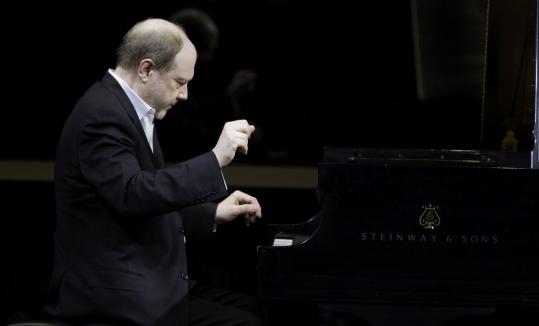 Hamelin’s prodigious reserves of virtuosity were turned not so much toward display as subtle fine-tuning at the very edge of the pianistic learning curve. The cut with which each note was released back into silence stamped Hamelin’s approach to Franz Josef Haydn’s Sonata No. 53 in E minor: crisply faceted, lightly pedaled, daylight in every phrase. Combined with dynamic restraint, it produced not an imitation of the lighter pianos of the Classical era, but an evocation, the sudden steel of full, modern Steinway accents recapturing something of the cheerful shock that Haydn’s listeners might have felt.

Karlheinz Stockhausen’s “Klavierstück IX’’ was a rhapsody in sustain and decay. The music channels effects borrowed from electronic music — the 140 repeated chords of its opening bar reverberating like an Echoplex — but the core is the piano’s resonance, the sound left hanging once a key has been struck. Stockhausen keeps that cloud of reflections buoyed with ingenious, far-out compositional engineering; Hamelin realized it with skillful, exceptional beauty. Attacks drove Maurice Ravel’s urbanely voluble “Gaspard de la nuit.’’

Hamelin brought all manner of touch into service: in the “Ondine’’ movement, soft attacks of such speed and quantity to blur into a kind of animated pastel; in “Le Gibet,’’ precisely layered gradations, scenery flats gliding in and out. The finale, “Scarbo,’’ found Hamelin maneuvering between elegantly stung repeated notes and athletic arpeggiation like baseline and net.

If “Scarbo’’ is, perhaps, Ravel’s attempt to out-Liszt Liszt, it was Liszt himself filling the recital’s second half. The technical trials of “Bénédiction de Dieu dans la Solitude’’ demand subsumption into an expanding pageant of meditative grandeur; Hamelin’s performance was unassumingly formidable, profound, superbly paced, the melodic line not just effectively distinct from the eddies of accompaniment, but seeming to well up from within. The “Réminiscences de Norma’’ (after Bellini’s opera) turns the same techniques to pure spectacle, the sort of powerful sleight-of-hand that fueled Liszt’s celebrity. Hamelin gave it its burly due.

For an encore, Hamelin chanced a work he had never played in public, but, as he noted, was suited to Rockport’s oceanic backdrop: Ravel’s “Jeux d’eau,’’ waves of notes sweeping in and out with bright, liquid mass. Hamelin’s pianism is deep enough to let the strongest currents course under the surface.