A powerful performance from A Far Cry 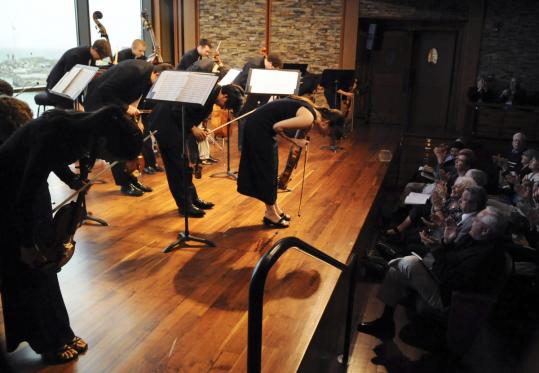 Members of A Far Cry, a self-conducted string orchestra, take a bow Sunday at the Shalin Liu Performance Center in Rockport. (Lisa Poole for The Boston Globe)
By Matthew Guerrieri Globe Correspondent / June 14, 2011

ROCKPORT — A Far Cry plays with no shortage of vim. The members of the conductor-less string orchestra love nothing more than to throw themselves into a musical phrase with vital conviction: energetic bowing, energetic phrasing, energetic stage presence.

For their concert on Sunday, part of the Rockport Chamber Music Festival, they brought a program checking off boxes of varied historical style and familiarity; but the overarching theme was the variety of purpose to which the ensemble is able to turn all that energy.

The energy in J.S. Bach’s Third Brandenburg Concerto, percussive and mettlesome, was all geared toward momentum. Shifts of bow attack propelled the music into the next bar; a typical pattern (particularly from the cellos and double bass) combined a crisper upbeat with a deeper, weightier downbeat — not dissimilar to a rock drummer’s hi-hat and bass drum. The finale was a furious dash, a breathless roller-coaster ride.

Having demonstrated their firepower, the players proceeded to generate energy by keeping their powder dry. Samuel Barber’s eminently familiar “Adagio for Strings’’ was given a reading leaner and more restrained than the kind of volcanic romanticism the piece often inspires, an intensity of reticence.

Similar modulations featured in Felix Mendelssohn’s String Symphony No. 7. The fun of early Mendelssohn — he wrote the Symphony when he was 13 — is the way it combines preternatural polish with recognizably adolescent exuberance. Both the music and the performance played with that balance, drawing on the friction between classical refinement and a more impetuous, retro-Baroque verve.

For an encore, the group turned the power on full-blast with a boisterous arrangement (by Osvaldo Golijov and Ljova) of Taraf de Haïdouks’ “Turcaesca,’’ like a Romanian wedding compressed into a disorientingly raucous highlight reel. A Far Cry is the musical version of a universal adapter: a live wire providing whatever level of voltage the moment seems to require.