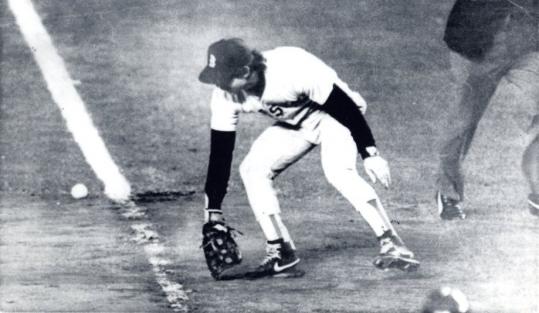 The Baseball Project has recorded a song about Bill Buckner (in 1986) (Globe File Photo)
By Andrew Dansby Houston Chronicle / April 1, 2011

On paper, the idea sounds questionable: four rock vets with more than 100 years of tenure among them knocking out original power-pop songs about baseball. But the Baseball Project works.

For starters, Scott McCaughey of the Young Fresh Fellows and Steve Wynn of the Dream Syndicate have an easy way with a melodic garage-rock song; either could turn a song cycle about, say, surgery into something that inspires toe-tapping.

“You do this kind of stuff all the time — getting together with other musicians and vowing to do this record or that tour and then getting sidetracked for years,’’ Wynn says. “But once we started trading demos of the actual songs, we knew that it was serious and that we had found the proper partner in crime to make the record.’’

Adds McCaughey, “We just knew we wanted to try to write songs about baseball that stuck to the same high standards we hold ourselves to when writing about gutters, moonlight, divorce, and taxidermy.’’

And both are funny enough to capture baseball’s irrepressible spirit and smart enough to know that to linger in its frivolity is to condemn oneself to novelty. So the Baseball Project cleverly finds the gristle and sweetness of life in America’s Pastime. There are exuberant and punchy anthems about two of last year’s World Series-winning , but there’s also something wistful and heartbreaking about “1976,’’ inspired by the death of Mark Fidrych.

McCaughey says, “The stories with the tragic twists and dour endings are most alluring, but with Steve and me, I like to think there’s plenty of humor in there to counterbalance the cracked skulls and drunken dives into riverboat propellers.’’

Featuring R.E.M.’s Peter Buck on bass and guitar and Linda Pitmon from Wynn’s Miracle 3 on drums, the group powered through songs from its two albums, including the just-released “Volume 2: High and Inside,’’ recently at the South by Southwest Music Conference in Austin, Texas. There the songs were celebratory, even when sad or tragic. Like McCaughey’s “Buckner’s Bolero,’’ about former first baseman Bill Buckner.

On one hand, there’s an evident glee in trying to find a word that rhymes with “Calvin Schiraldi.’’ “One might argue that ‘Yawkey’ and ‘Schiraldi’ isn’t a true rhyme,’’ McCaughey says. “But I consulted the Paul Weller Rhyming Dictionary and found it was considered a nine out of 10.’’

By its conclusion, the song gets contemplative:
But if even one man doesn’t do one thing he does
We’d all know Bill Buckner for just what he was
A pretty tough out for the Dodgers, Red Sox and Cubs
Ten thousand at-bats and close to three thousand hits . . .
But there’s only one play that ever gets talked about
Now some kind of fame lies in being a scapegoat
And if not that then you’re just a historical footnote
And your 22 years playing ball might be forgotten
Maybe Bill Buckner was lucky his luck was so rotten.