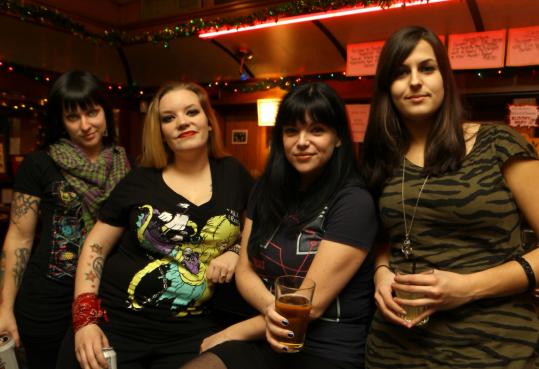 It’s baaaaack. But unlike a Poltergeist, the once (and again) annual Rock ’n’ Roll Rumble won’t suck you through your TV set or cause bad things to happen to everybody involved in the production (at least we don’t think so — although there is that “Rumble Curse’’ thingy).

What the re-booted Rumble — returning this year after what turned out to be a one-year hiatus — does aim to do is showcase two dozen of the best and stylistically diverse bands from Greater Boston.

As Anngelle Wood, host of 100.7 WZLX’s “Boston Emissions’’ program and the person spearheading the Rumble’s return, puts it, “It’s certainly not every great band in the city, but it’s certainly 24 of the great bands in the city.’’

Wood, who took the reins of the Rumble in 2009, was undaunted by the enormous amount of planning involved. “It is labor intensive, that’s for sure,’’ admits Wood. “The biggest change [from years past] is that it’s been all me, and Randi Millman [booking agent] from T.T. the Bear’s has helped a lot. But once it actually starts, it’s easy.’’

Wood insists she always had designs on bringing the Rumble back. “I never planned on not doing it again,’’ Wood says of reviving a Boston institution, albeit one that’s always engendered a love-hate relationship among musicians (“the Grumble,’’ Wood jokingly calls it).

“It is technically a battle of the bands, but it’s the longest one that’s ever happened in the country. I think that’s part of the element of tradition that people definitely want to be a part of. Sometimes, something has to go away for you to miss it.’’

For the first time in both the history of the club and the contest, T.T. the Bear’s Place will host the Rumble, which runs April 3-22, with the first of the six-night preliminaries kicking off Sunday evening.

With so much cool music to choose from, we wonder if she wants to join us in making predictions for the prelims. Wood wisely declines, perhaps sensing an update of the dreaded “Rumble Curse.’’

“Better you than me,’’ she says with a chuckle. “I’m Switzerland.’’

Our pick: Jenny Dee and the Deelinquents

One of the Rumble’s most retro-rocking nights features a veteran soul-pop outfit with the outfits (and ’60s girl group harmonies) to match. Last summer, Jenny Dee and the Deelinquents opened for the J. Geils Band and Aerosmith at Fenway Park, so let’s just say they know how to work a crowd. So does their competition. To quote the title of Blizzard of 78’s recent EP, “Nothing or No One’’ might stand in the way of these upstart blue-eyed soulsters. They’ve got horns, harmonicas, and heart.

Dark horse: Walter Sickert and the Army of Broken Toys

The band formerly known as Vagiant (don’t ask!) is the only all-female band in this year’s Rumble, and its members do sport bad-girl nicknames like “The Hellion’’ and “LoWreck.’’ But as anyone who’s seen or heard ’em knows, punk-poppers Tijuana Sweetheart is no gimmick. Steam-crunkers Walter Sickert and the Army of Broken Toys boast a membership (eight-plus performers) worthy of its name. The group’s Fellini-esque dark carnival of sight and sound just might make for the Rumble’s strangest, most surprising set.

He came close to a Rumble win in ’06 as the leader of the Rudds (they finished second), but this could be the year for the disco-and-Darryl Hall-loving J-Po, whose groovy showmanship and golden throat might finally bring him a crown of the same color. We also have a soft spot for Spirit Kid’s brand of infectiously sun-dappled, handclap pop, and Spirit Kid mastermind Emeen Zarookian’s clever way with an addictive melody makes him a wolf (shaking a tambourine) in sheep’s clothing.

It’s almost unfair that the four dudes from the Acro-brats first cut their teeth in a fistful of sharp punk and hard-core combos like Razors in the Night, Jason Bennett & the Resistance, Wild Zero, and others. Watch for a high-energy attack that should ignite the room and then strafe it like artillery fire. TRiPLE THiCK sound like a woolly, woozy history of Boston garage-punk run through a gunked-up four-track (that’s a good thing).

Contenders: Tired Old Bones, Stereo Telescope, Do Not Forsake Me Oh My Darling, Keep Me Conscious

One of the city’s best, most buzzed-about electro-pop outfits offers a striking contrast to the guitar armies that historically Rumble. But one thing Stereo Telescope shares with the competition is a clutch of terrific tunes that don’t veer into kitschy 8-bit abstraction or noodling. They’ve been racking up best-of nominations and awards in stereo, so this could be their year. A goth atmosphere swirls around the dark alt-rock of the intriguingly un-pigeonhole-able Tired Old Bones and singer Bridget Nault’s bracing vocal delivery.

Led by chrome-domed, platform-booted frontman Tad McKitterick, Sidewalk Driver is a band of cheeky culture vultures who like to name-check ABBA, Frank Black, and Baryshnikov in songs, but never forget to fuel their dance-floor fun with rock ’n’ roll fire — not to mention glitter-encrusted hooks galore. Call it glam, call it power pop, we’re calling it hard to beat. The Year Million’s debut album last year showcased a crew of sure-handed arena-rock hopefuls adept at deploying sinewy riffs, emotionally charged vocals, and even power ballads aimed at the stars.

To hear tracks from this year’s crop of Rumble hopefuls, visit the Sound Effects blog at boston.com/soundeffects. Jonathan Perry can be reached at roughgems@comcast.anet.