Sebadoh bounces back with the reissue of 1994’s ‘Bakesale’ 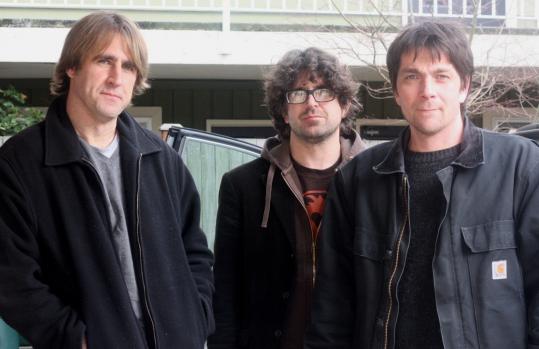 When people tell Sebadoh singer-guitarist Lou Barlow that his group’s fifth album, “Bakesale,’’ changed their life, Barlow understands completely. The album — and more specifically, the time he spent living in Boston recording it — changed his too.

“I had a really good time making that record,’’ recalls Barlow, whose band hits the Paradise next Thursday for the US leg of its “Remembering Time’’ tour. “I had moved to Boston in ’91 and around the time we did ‘Bakesale,’ things had finally started to come together.’’

The two-month trek coincides with a deluxe reissue of 1994’s “Bakesale,’’ Sebadoh’s most accessible and commercially successful effort. (The remastered album, which Sub Pop is re-releasing in June with 25 bonus tracks of B-sides and demos, is also out next month on European label Domino). Joining Barlow and longtime Sebadoh member Jason Loewenstein this time out will be Fiery Furnaces drummer Robert D’Amico.

Sebadoh had always seemed to draw creative energy from upheaval, incertitude, and a degree of open-ended chaos. Before making “Bakesale,’’ Sebadoh cofounding drummer Eric Gaffney had quit, and singer-guitarist Loewenstein had moved to Louisville, Ky.

But Barlow (and Loewenstein, as it turned out) was writing, putting home recording experiments to tape, and soaking up the atmosphere of a new city. His surroundings and circum stances seemed to take on an idyllic, even magical, quality. Serendipity played a part too.

“I had my friend Bob Fay, who was filling in on drums for Eric, and he worked at [the local record store] In Your Ear in Harvard Square and also out near [Boston University],’’ says Barlow, who, with his girlfriend (and now wife), lived in Somerville before moving to the North End. “When I wasn’t touring, I had this kind of cool life puttering around Boston, taking the subways around, buying records, and Bob had this pretty cool place to practice in Charlestown. It was a really positive period, and I kind of fell in love with living in Boston.’’

What’s ironic is that sour-sweet songs such as “License to Confuse,’’ “Not Too Amused,’’ and “Rebound’’ — many of them wrapped tightly in thorny thickets of buzzing electric guitar — made “Bakesale’’ sound like a wounded, keenly compact kiss-off. But underpinning it all was a newfound pop sensibility that had rarely been hinted at on Sebadoh’s previous albums.

Barlow recalls tuning in to the myriad college stations in and around Boston and listening intently. “I remember at the time there was a real shift in everything, because coming out of the ’80s and into the very early ’90s, underground music was kind of angry — real sludgy, uncompromising, and challenging music,’’ he says. “Then it just seemed like all of a sudden, with bands like Pavement and Superchunk, things became a little more poppy. All of a sudden, pop started creeping in.

“I’ve always gravitated toward that stuff anyway,’’ Barlow continues. “Sebadoh started as a reaction to what I thought was a really macho environment in underground music at the time.’’ But part of the less overtly experimental, more straightforward approach of “Bakesale’’ also had to do with blatant self-interest, Barlow admits with a laugh.

“I definitely made a conscious decision to streamline the way Sebadoh were playing, just in order to make our tours easier — like, I’m going to write this next batch of songs and translate them all to six-string guitar, as opposed to my four-string alternate tuning,’’ says Barlow.

“We’ve always toured but we’ve also always struggled, and I guess at some point after Eric Gaffney left the band, I thought, ‘Well, you know what? Let’s not struggle for a little while and see how that goes!’ ‘Bakesale’ was our first really streamlined record — although it’s still a pretty rough record. It’s pretty off-the-cuff, but it’s very concise.’’

“Bakesale’’ was recorded on the fly at Fort Apache Studio in Cambridge, with producer Tim O’Heir at the helm. “We did it really quick, and there was a lack of pressure,’’ Barlow says. “Some of my best experiences at Fort Apache were like, OK, we only have this amount of time and days, so let’s see what we can do. And because most of that record was recorded in the same room, it had a way of making everything more consistent-sounding. That was probably a big part of the appeal — that it was texturally consistent, as opposed to the records we had done before, which were pretty actively trying to disrupt the listener from song to song.’’

Things would rarely run as smoothly for Sebadoh again. The band’s 1996 follow-up, “Harmacy,’’ (reissue plans are in the works for that album as well), found the band fraught with tension and pressure to repeat the commercial success of “Bakesale.’’ Hiatuses and reunions followed. But for that one special, shining moment, Sebadoh had broken through.

“It was great to finish a record and go, ‘Hey, this sounds great,’ and have people go, ‘Wow, that sounds great,’ ’’ Barlow says. “And it’s selling records! So the record company is happy, and everything is going better than expected. That doesn’t happen too many times in your life.’’