At long last, the Radio Dept. brings its ethereal pop to Boston 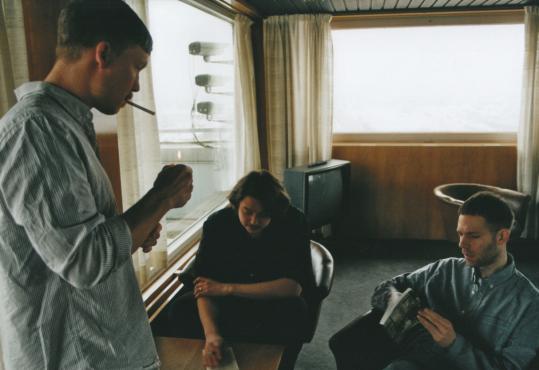 Even in a digital age that puts music discovery and consumption at your fingertips, the Radio Dept. has been an oddity over the past decade: a band you could love only from afar.

Initially an indie sensation in its native Sweden, the dreamy pop trio gradually amassed a fan base in this country but never toured here extensively. Everything you knew about the Radio Dept. you had to glean solely from the music, which offered a beguiling blend of gauzy shoegaze and jangly guitar pop.

“Sometimes that’s a good thing, I think, because every band is so accessible nowadays,’’ says Johan Duncanson, the group’s lead singer and guitarist. “I think it’s good to have a little mystery.’’

Maybe so, but the Radio Dept. is slowly shedding its mystique, starting with the acclaim for last year’s “Clinging to a Scheme.’’ The band has also just embarked on a lengthy North American tour that stops at the Middle East Downstairs tomorrow night for the Radio Dept.’s Boston debut.

As some of the venues sell out, much to the band’s surprise, Duncanson admits he never expected the Radio Dept. to have such longevity. In fact, he hardly even considers the Radio Dept. a proper band.

“I guess we’re full of contradictions. Of course we’re a band like many other bands, but we’ve never felt like a band in the traditional sense,’’ he says. “We’ve never recorded in a real studio. We’re just a couple of friends who started making music out of our homes. And suddenly there’s a label that wants to put it out, and we’re supposed to play shows. We were never prepared for any of that.’’

A crossover into the US market has been long in the making, but Duncanson says the band didn’t exactly make it easy.

“We like to tour, but our main thing is putting out records,’’ he says. “Not that we want to spend all our lives in the studio, but we’re quite shy people. We’ve been doing this for eight, nine years now, but I never get used to being on stage.’’

That might explain the sublime restraint you hear in the Radio Dept.’s songs, from the serenity of Duncanson’s heavily reverbed voice to the ethereal synthesizers. They routinely get compared to both My Bloody Valentine and Pet Shop Boys.

Like those bands, Duncanson says the Radio Dept. has been especially protective of its aesthetic. They produce the records themselves and tend to tinker with songs until the very last minute.

“We take everything very seriously — not in the boring sense of the word — but when it comes to the music, we have our ideas about stuff and we don’t want anyone to mess with them,’’ he says. “It’s really important to us to be in control of every aspect of the band, which is becoming harder as the band grows.’’

Of course, Swedish bands, at least the ones that often get noticed the most overseas, have had a long history of making impeccably produced pop records. Labrador Records, the Radio Dept.’s label, has been synonymous with an exuberant pop sound thanks to bands such as Acid House Kings, the Mary Onettes, and Sambassadeur.

The Radio Dept. doesn’t quite fit that mold, though. Its rainy-day melancholy peeks through even the most buoyant melodies, almost like an affront to the sunshine pop of their labelmates.

The Radio Dept.’s latest release is a reminder that the band didn’t always sound quite so hypnotic. “Passive Aggressive: Singles 2002-2010,’’ a two-disc compilation of the group’s early work, reveals a harder sound full of jagged distortion and noise.

The move to more organic melodies and production suited the songs just as well, and Duncanson admits that he and his bandmates scoff at the notion that they’re a rock band.

“We’re scared of the cliches that come with that,’’ he says. “Saying ‘It’s great to be here,’ although we might feel that way, is something we don’t want to hear a band say at a show.’’

His idea of a staggering rock show is more akin to what the Radio Dept. conjures live. “I like to see a show where you can tell that the artist is quite nervous, but they do it anyway,’’ he says. “If you can express uncertainty or weakness on stage, that kind of show impresses me more.’’

No matter how much the music and band lineup have changed, though, Duncanson has realized there has always been at least one common thread.

“I think there’s a dreaminess or a romantic touch to the songs that we can’t shake even if we wanted to,’’ Duncanson says. “Not that we would want to.’’