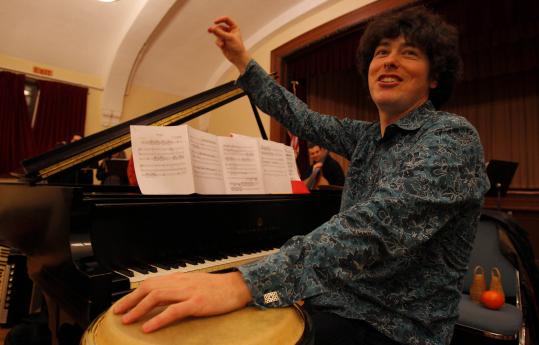 The hard work that goes into making something look easy and effortless — be it music, magic, or the perfect pizza — is an ironic truth that the late bandleader and space-age pop pioneer Juan García Esquivel readily understood. Those mirthful melodies and zany orchestral arrangements he concocted for a series of albums whose original intention was to demonstrate the power and possibility of hi-fi sound were, in fact, the product of an exacting musical perfectionist.

Cambridge percussionist-pianist Brian O’Neill also knows the painstaking process that goes into working on a project designed for play. In his case, it’s both a new CD tribute to the Mexican lounge king, titled “The Unforgettable Sounds of Esquivel,’’ and a marvelously flexible unit that can morph from a small, swinging combo to the full-blown 23-piece orchestra featured on the album.

Tonight, O’Neill, who goes by the stage sobriquet Mr. Ho, brings both ensembles (the Exotica Quartet and Mr. Ho’s Orchestrotica, respectively) to the YMCA Theatre in Cambridge, where the big band will do something Esquivel himself never got a chance to: perform a program of his lush, large-scale studio arrangements of standards such as “Night and Day,’’ “Take the ‘A’ Train’’ and “Sentimental Journey,’’ as well as steel guitar-and-high kitsch Esquivel originals like “Mini Skirt.’’

“Touring with a 30-person band was not feasible [for him] back then,’’ says O’Neill, who first came across Esquivel’s “More of Other Worlds, Other Sounds’’ while perusing a New Hampshire record store in 2004. “It was really intended to be recorded music to show off what new stereos could do, and part of the art form was the production, not just the music. Some people call it lounge and think it’s cheesy and campy. But there’s also something different to it than the traditional big band sound.’’

Indeed, Esquivel’s playful polyglot of American pop, Latin samba, jazz, swing, and classical impulses takes even the most straightforward of songs into territory that could be considered a kind of proto-“world music.’’ But no matter where Esquivel (or now, Mr. Ho’s Orchestrotica) goes, a sense of fun and frivolity prevails — just check out the breezy “zu-zu-zu’’ vocals that spring up everywhere, or the percussive bounce and sassy brass that carries “Let’s Dance’’ right into “Dancing in the Dark.’’

“He created something that was completely unique and very, very wild,’’ says lounge music expert Brother Cleve, a DJ and musician who collaborated and became friends with Esquivel during the last years of his life (Esquivel died in 2002 at age 83), and who produced “Unforgettable Sounds.’’ “For someone like me who grew up worshiping Frank Zappa and Captain Beefheart and Sun Ra and people that were doing wild and crazy music with a lot of humor in it, Esquivel was a natural progression.’’

Brother Cleve met Mr. Ho through a mutual friend, Gato Malo guitarist Shaun Wortis, when O’Neill — who at the time was playing in the lounge outfit Waitiki — hit upon the idea of performing Esquivel’s music with a live orchestra. All he needed was the sheet music. There was a slight problem, however.

“All of his scores were lost or de stroyed,’’ says Cleve. “Esquivel had left Las Vegas [where he had been living] in 1976 and went back to Mexico trying to get some work, and left everything in storage in Vegas. Eventually, somebody stopped paying the bills on the storage space. So, all of his stuff is probably buried somewhere in the Arizona desert — all his clothes, gold records, and everything else.’’

When Cleve told O’Neill the bad news, his new acquaintance was unfazed. “I told [Brian] the sad tale and he said, ‘I bet I can write the stuff myself by ear,’ and I said, ‘OK, here’s every record. I had copies of them all.’’ (In fact, Cleve’s collection of original Esquivel LPs has been utilized as source material to produce several CD re-issues over the years). “When I told Cleve what I wanted to do,’’ O’Neill recalls with a laugh, “he thought I was pretty crazy.’’

Both the new album and tonight’s performance mark the triumphant culmination of what eventually turned into a five-year project: O’Neill’s note-for-note transcription, by hand and ear, of 17 of Esquivel’s big band arrangements. A film crew working on a documentary about Esquivel’s life is even scheduled to be on hand to film tonight’s concert.

“I just finished the last chart a few days ago, although they go through revisions constantly,’’ says O’Neill, who plans to release more albums as part of a continuing “Exotica for Modern Living’’ series. The second, “Third River Rangoon,’’ containing original compositions by his Exotica Quartet, is due out in May. “I’m always trying to improve them and it’s an ongoing process.’’

For the album, O’Neill enlisted a who’s who of stellar musicians from Boston and beyond, among them trumpeters Yaure Muniz (Afro-Cuban All Stars), Paul Perfetti (Boston Pops Orchestra), and a laundry A-list of others. A total of 23 musicians gathered under one roof — in this case Futura Productions, a spacious studio and onetime Masonic lodge in Roslindale — for one six-hour recording session that proved a challenge from the outset. Just getting everyone miked correctly put the session two hours behind schedule.

“It’s a monumental task to bring that large a group into a studio situation and do it live,’’ says Cleve. “The most challenging aspect was the fact that we had 49 microphones open and on, in one room simultaneously, with a piano. With two timpani. With a vibraphone and a marimba. Six saxophones. Four trumpets. Three trombones. A drum kit. That’s what we were up against, and it was tricky.’’

All the while, Cleve thought of his old friend and imagined him in the studio, hearing his music once again swelling and filling the room. “He was very intense and always got his way, no matter how many takes it took to record something — he was very clear in his vision,’’ Cleve says. Esquivel, he’s certain, would approve of Mr. Ho’s Orchestrotica. He’s sure of one other thing too. “I know he’d be going insane if he was making records now because of the endless possibilities. He’d never get out of the studio.’’

With the Exotica Quartet