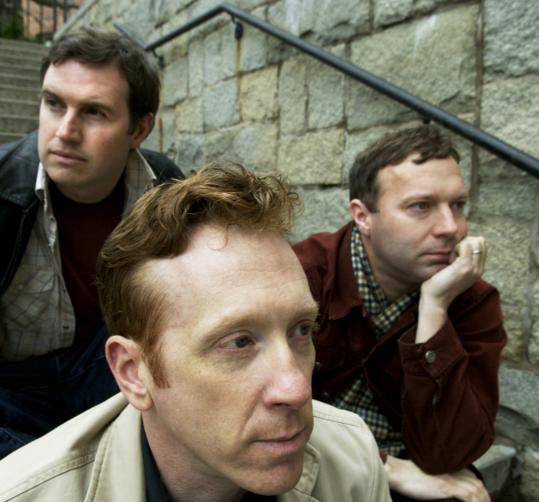 No sooner have 2010’s local pop and rock releases whizzed and whirred by — and, with an exuberant clatter, joined the dustbin of history — than a slate of promising releases for 2011 are suddenly upon us. Given that 2010 saw the release of a bounty of local goodness (among them Faces on Film’s “Some Weather,’’ Kingsley Flood’s “Dust Windows,’’ John Shade’s “All You Love Is Need,’’ Young Adults’ “Black Hole,’’ Ghost Box Orchestra’s “The Only Light On,’’ not to mention an awesomely eclectic 27-track, two-LP compilation of Whitehaus Family Record artists), we can only hope that history repeats itself.

In fact, in surveying what’s on tap for the days, weeks, and months ahead, we’re sure of at least one thing: 2011 will be a lively, loud, and loverly year indeed, made up of sounds from faces both familiar and fresh.

Speaking of the former, two of this town’s longest-running pop-rock bands, Buffalo Tom and the Sheila Divine, are both set to drop long-awaited discs. Following a successful Kickstarter campaign to fan-fund its first album in eight years (as yet untitled but due out in April or May, singer-guitarist Aaron Perrino tells us), the Sheila Divine has been posting new tracks as they are completed at the group’s Bandcamp site. So far, “Horses’’ is the divinely anthemic front-runner of the three, and it’s a safe bet you’ll hear more of what’s in store at the Sheilas’ Jan. 14 show at the Paradise.

Considering that Buffalo Tom had been on hiatus for nearly a decade before issuing ’07’s “Three Easy Pieces,’’ three years doesn’t seem too terribly long a wait for “Skins,’’ the alt-rock trio’s eighth album, and the first on its own Scrawny Records imprint. Look for standard and deluxe CD versions, as well as vinyl (with bonus-track download card for the goodies) on Feb. 15.

Local guitar ace Tony Savarino has played with, by his own estimate, more than 100 musicians during a long, lustrous reign as one of the city’s finest ax slingers. So it’s only logical Savarino should call his voraciously free-ranging instrumental debut album “Guitaring.’’ Expect rock god heroics, jazzy detours, tasteful twang, and just about everything in between when the master plugs in to celebrate at Atwood’s Jan. 8.

Wolves and the Radio didn’t have to travel far to get noticed. The Allston punk upstarts, who signed with Allston’s Anchorless Records label, will drop their self-titled debut Jan. 11 and celebrate the occasion the same night with a show at Great Scott.

The Rosebud will host a Sweet Triple CD release on Jan. 15, and it’s an especially giddy three-fer starring St. Helena, who drop a debut full-length, “Modern Tan’’; the Parlour Bells, who release “Heart Beatings’’; and Low Static Romance (which consists of the duo of St. Helena’s Magen Tracy and Brendan Boogie, the latter of whom celebrates his new EP, “Songs From the Armory Vol. 1’’).

Hands and Knees returns Jan. 18 with both vinyl and digital versions of its third album, “Wholesome’’ (available via handsandknees.bandcamp.com), a self-released affair that features spiky jangle-and-hook-laden new tracks like “Dancing on Your Tears’’ and “Sitting at the Piano Disappearing.’’ “Throw Me From the Bridge of Flowers’’ is, of course, a reference to the band’s Shelburne Falls origins (where yes, there really is a bridge of flowers). Feel free to bring your own when the group hits Great Scott Jan. 27. On the same night, the Chandler Travis Philharmonic finally hosts its long overdue record release party for “The Chandler Travis Philharmonic Blows’’ at Johnny D’s.

The stylistically un-pigeonhole-able Mean Creek continues its charming quest for world (or at least Boston-area) domination with the release of its new “Hemophiliac’’ EP, to be celebrated with a show Jan. 29 at the new Brighton Music Hall (in the former Harpers Ferry). In addition, the band is reportedly getting ready to record its new album this month with producer John Agnello (Dinosaur Jr., Sonic Youth, Hold Steady) for a spring 2011 release. Orchestral twee-pop kids One Happy Island are set to release a split EP (on both orange wax and as a digital download) with their pals Standard Fare on Jan. 31. You may be able to grab a copy earlier, though, at their Lizard Lounge release party Jan. 29.

Riding high on its recent BMA “Americana Act’’ win and NPR love (not to mention ours from way back), the David Wax Museum celebrates the release of its third, Mexican-folk tinged album, “Everything Is Saved,’’ with a Feb. 3 show at Club Oberon in Cambridge. If the show is anything like the CD sounds, expect joy, heartache, soul, and musical surprises. Another one of the region’s top-shelf acts, Rhode Island’s the Low , is set to release its third album, “Smart Flesh,’’ on Feb. 22. A variety of CD, LP, and bonus baby pre-orders are available (go to www.lowanthem.com for details).

Before that, however, Low Anthem singer-guitarist Jocie Adams celebrates the same-day release of her solo debut, “Bed of Notions,’’ Jan. 20 at the Lizard Lounge. Elsewhere, pop-rock charmers Naked on Roller Skates hosts a release show for its “I Lost My Heart in the Battle’’ CD at Great Scott Feb. 12.

It just played its first show in more than a year. And now, pared down from a six- to a three-piece, the post-rock Eksi Ekso soars, slashes, and burns and chimes again on its sophomore full-length, “Brown Shark, Red Lion,’’ due out Feb. 15. The band also has a nifty limited-edition 45-rpm release of the album’s first single, “Kills of the Flood Tide,’’ available at its label’s site (www.mylenesheath.com).

Mustachioed man-about-town Michael Epstein’s latest, mostly female nine-piece baroque-pop band, the Michael J. Epstein Memorial Library, is set to release its debut LP with a Feb. 26 show at the Middle East Downstairs. Epstein, who has previously led the Motion Sick and Do Not Forsake Me Oh My Darling, says the impetus for launching the group was wanting “a fresh take on making music in Boston. I encouraged people who had never been in bands before, and with only a couple of exceptions, avoided including people that I knew in any previous capacity.’’

Thanks to a successful Kickstarter fund-raising campaign, Gothic-folk chanteuse Marissa Nadler is heading to a Philadelphia recording studio to begin working on the full-length follow-up to ’09’s gorgeously unsettling “Little Hells.’’

We’re told that 2010 BMA Rock Artist of the Year Girlfriends have finished yet another seven-inch single that should see release sometime over the next few months. The band’s also begun recording tracks for its debut LP, due out this year with many shows in support to follow.

And finally, a few high-profile newer and older artists you may have heard of also reportedly have new albums in the works for 2011: electro-pop stars Bodega Girls, Passion Pit, and — wait for it — the Cars (yes, the Ric Ocasek version, not the Todd Rundgren “New Cars’’ retread). Hey, is it really 2011?