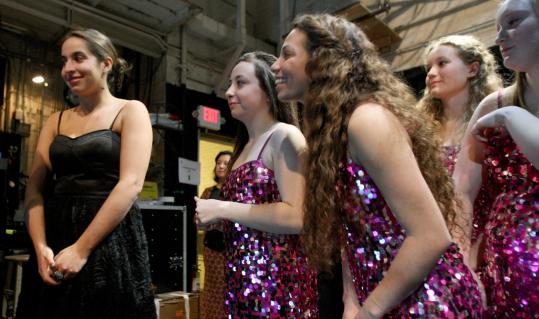 With pink and silver sequined dresses sparkling under the Shubert Theatre stage lights, four teenage singers introduced as The Sapete Sisters took turns singing into the microphone while the other three stood behind snapping fingers, bobbing up and down, and adding doo-wop harmonies.

But the song was no Beach Boys number: The girls performed “Voi Che Sapete’’ from Mozart’s “The Marriage of Figaro.’’

“I think we’re very different from the other groups, so I hope that works in our favor,’’ said Sapete Sisters member Kaitlin Doherty, 16, of Millis.

The group was one of four competing in the Linda Cabot Black Aria Contest as part of the Boston Lyric Opera’s second-annual open house. The event attracted 583 families to the Shubert Theatre yesterday for backstage tours; wig and makeup demonstrations; and other activities.

Three judges, one of whom was Ashley Rizzo, the current Miss Boston and an opera singer, evaluated the quality of the performances and the singers’ musicianship.

Standing in their dressing room before taking the stage, Doherty, a junior at Millis High School, and her ensemble mates Caroline Orsi, 17, of Millis, and Ariel Galford, 17, of Sharon, were calm and collected compared to the fourth member, Jessica Price, 16, of Millis, who had competed last year.

“I just hope I don’t fall over,’’ said Price, who also performed a solo rendition of “Habanera’’ from Bizet’s “Carmen.’’

Tal Heller, 16, of Sharon, who has performed in operas such as Mozart’s “Don Giovanni’’ and Humperdinck’s “Hansel and Gretel’’ stood still onstage with clenched fists, delivering a more classical version of “Voi Che Sapete.’’

Heller’s love of opera began in musical-theater classes she took in sixth grade. When a vocal coach introduced her to opera, she became enamored with it.

In the vein of “American Idol,’’ host Joyce Kulhawik, an arts and entertainment critic, urged audience members to text their pick for winner as judges deliberated.

Taking home the first place cash prize of $1,000 was Heller, followed by Price, who won the $500 second prize, and Anna Shneyderman, 15, of Brookline, with the $250 third prize.