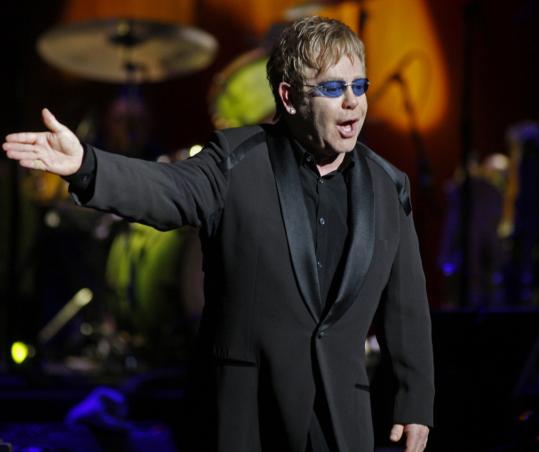 Elton John took a bow at the end of the show. Photos were not allowed during the performances. (Photo by Matthew J. Lee/Globe Staff)
By James Reed Globe Staff / October 18, 2010

Performances aside — and they were uniformly inspired — there was an undeniable charm to Saturday night’s Speaking Clock Revue at the Citi Wang Theatre. Nowhere else could you watch 83-year-old bluegrass patriarch Ralph Stanley amble past Elton John, who was busy squeezing John Mellencamp’s shoulder and embracing up-and-comers the Secret Sisters and Karen Elson at the end of the show.

Or witness Elvis Costello and T Bone Burnett, guitars in hand, rushing out of the wings to join actor Jeff Bridges on songs from the film “Crazy Heart.’’ Oh, and yes, that was Neko Case sidling up to sing harmony with Gregg Allman on “Midnight Rider,’’ an Allman Brothers Band classic he hasn’t performed since his liver transplant in June.

Such was the electricity that the benefit concert brought to life with an incredible roster of musicians who were as dynamic as one could have predicted. The three-hour-plus revue, which moves to New York’s Beacon Theatre on Wednesday, was the brainchild of Burnett, the producer who enlisted an array of musicians he has worked with, and a few he simply admires.

The ground rules were simple: With a few exceptions, most everyone played only songs they’ve recorded with Burnett, ensuring the evening was fresh and unique. Burnett’s presence felt like it often comes across on record — minimal but essential. He briefly plugged the new documentary “Waiting for ‘Superman,’ ’’ which looks at the need for education reform in public schools, but indicated early on that everyone was here for the music.

The first act was smartly curated to intersperse rising acts with legendary ones, meaning if you didn’t like the virtuosic bluegrass quintet Punch Brothers (but how could you not?), Mellencamp was just a few songs away.

Costello served as an amiable host, kicking the show off with “Brilliant Mistake,’’ flanked by Elson and the Secret Sisters clustered around a microphone. Led by mandolinist Chris Thile, Punch Brothers were in fine rhythmic form — particularly on a raucous take on Jimmie Rodgers’s “The Brakeman’s Blues’’ — and later added some texture to other performers’ sets.

Meanwhile, Costello was right about the Secret Sisters in his introduction: They certainly did turn the crowd on its ear with their intertwined harmonies, never so beautiful as on a soaring rendition of Bill Monroe’s “The One I Love Is Gone.’’ British-born Elson was more ethereal, a vision of spooky Americana rendered right out of a Coen brothers film — floor-length white dress, flame-red hair, and a voice that could have used some color of its own.

Case, the evening’s other fiery songstress, was awestruck by her surroundings. “I’m trying to act cool right now,’’ she said as she surveyed the stage, noting the sheer talent of the house band, whose members have played on various Burnett productions. Case figured it was probably “just the greatest band ever,’’ from drummers Jim Keltner and Jay Bellerose, to guitarist Marc Ribot (always a force, especially during Allman’s cover of Muddy Waters’s “I Can’t Be Satisfied’’), among others.

The last of a breed, Stanley got the respect he deserved as he sang unvarnished folk songs and gospel with a guitarist and bassist, winning over the crowd with his simplicity and sincerity.

Even as the audience rooted for him, Allman was visibly nervous in his set, a bit shaky but poignant as he previewed country-blues songs from his forthcoming solo album on Rounder Records. Mellencamp, on the other hand, burrowed into his bone-dry latest recordings with Burnett, coming off like a grizzled rocker. He’s now writing some of the best songs of his career — and performed with the confidence that comes from such a feat.

In the headlining spot, John and Leon Russell debuted songs from their new album together, “The Union,’’ to be released tomorrow. Mutual admiration aside, they couldn’t have been more different, from John’s shiny grand piano to Russell’s modest baby grand. Russell, stoic and silent, came alive only when he was singing and playing; John was humble and straightforward as he introduced the songs.

While bold, their six-song set often felt out of step with the rest of the show, built on the notion that you can’t have too much of a good thing. That left songs such as “Gone to Shiloh’’ (with a cameo by Allman) and “Monkey Suit’’ overstuffed, featuring the full house band, a horn section, four powerhouse soul sisters wailing behind them, plus the dueling pianos. The ear simply didn’t know where to tune in.

And the eyes didn’t know where to focus, either, when the entire lineup materialized at the end of the night. As hugs and handshakes were exchanged onstage, the standing ovation quickly gave way to shrugged shoulders. Bets that the entire gang would perform together — “Will the Circle Be Unbroken’’ was a common guess — were soon called off.

Still, it was hard to quibble with the history that had just been made. To tweak Burnett’s opening remarks: Never mind all that — here was some music.