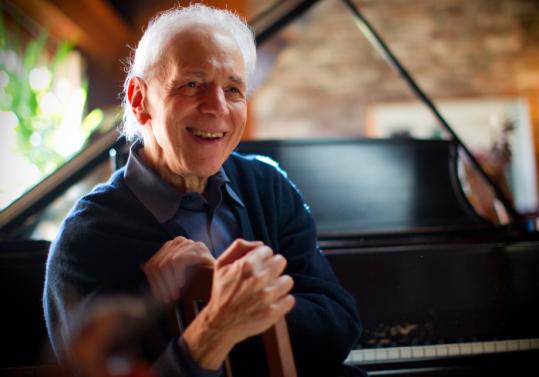 Jordan Hall hosted an apposite duo on Tuesday night: Russell Sherman, the most singular pianist in Boston, performing music of Robert Schumann, the most singular composer of the Romantic era. Sherman and Schumann show parallels beyond their unconventionality: Both carry through a personal vision with consistent integrity; both leverage their idiosyncrasies to draw the listener into sometimes startling intimacies; and both have the uncanny ability to make what in other hands might be commonplace seem wondrous and surprising.

Playing Schumann is often a matter of gracefully wrangling the composer’s divergent forms into a convincing whole. But in the Op. 18 “Arabesque,’’ one of Schumann’s most mobile-like pieces, Sherman went in the opposite direction, using considerably fluid rhythms and daringly stretched phrases to amplify the illusion of improvisation — each time the opening theme came back around, it felt less like a beam in the scaffolding and more like a spur-of-the-moment epiphany.

For “Kreisleriana,’’ Op. 16, Sherman made the piano’s sustain pedal a prominent prop in the story. In the opening movement, the pedal hardly came up from the contrasting middle section all the way back into the return of the opening material, the notes surrounded by a proliferation of resonance. When Sherman cleared the haze for the theme’s final iteration, it was as if sweeping away a dream. That became the pattern, the pedal like a gearshift between reality and fantasy: barreling, blustery fast sections shaking the music out of a blurred palimpsest of memory. It gave the dry sections more dramatic bite as well — the final staccato mutterings were like a deadbolt’s click.

Both currents came together in the Op. 17 “Fantasie’’: the sense of extemporaneity, the indulgence in the sense of sound. The music shifted between voluble tumult and an almost hesitant stillness. As in the “Arabesque,’’ Sherman emphasized Schumann’s stream-of-consciousness more than mitigating it; sometimes it left more virtuosic sections enervated, but the payoffs it did produce — the endings of the outer movements, for instance, delicate, perfectly voiced, and seeming to stop time — were magical. Sherman’s encore summed it up: Schumann’s “Vogel als Prophet’’ (“Bird as Prophet’’) hints at the faith that, if you bring enough imagination, the ordinary can be unexpectedly exalted.