THIS STORY HAS BEEN FORMATTED FOR EASY PRINTING
Jazz

After 25 years, the band plays on 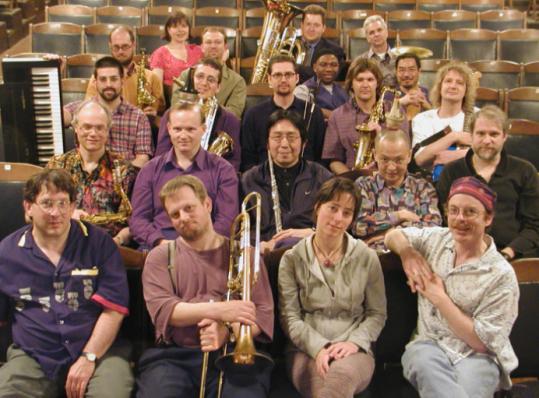 The Jazz Composers Alliance Orchestra is releasing its eight album, "A Wallflower in the Amazon."
By Andrew Gilbert Globe Correspondent / September 12, 2010

Keeping a big band together is a Sisyphean task requiring constant exertion, or else the entire endeavor comes crashing to the ground. When the ensemble is dedicated to performing new compositions stretching jazz conventions, the gravitational pull increases exponentially, which makes the quarter-century survival of the Jazz Composers Alliance Orchestra a truly impressive feat.

The JCAO’s Oct. 12 Regattabar performance will be a double celebration marking the band’s 25th anniversary and the release of the ensemble’s eighth album, “A Wallflower in the Amazon.’’ For Darrell Katz, the only founding member still active in the group and one of its six primary composers, the JCAO’s surprising longevity stems from the realization that creative stasis equals artistic death.

“Throughout the 25 years, it’s continued to grow,’’ Katz says. “We’re constantly doing new music, and the style of what we do has changed with a lot of people’s different input. It’s an ever-evolving thing. The JCAO this year isn’t doing what it was five years ago or 10 years ago.

“When I write music I hope I’m doing something new, not new for the world maybe but new for me,’’ Katz continues. “We really do have a very collective thing happening. It’s surprising we’ve managed to survive, and financially things have not gotten easier.’’

When the group first came together in 1985, launching a large ensemble didn’t seem like a quixotic undertaking. Trumpeter Mark Harvey’s Aardvark Jazz Orchestra had already been on the scene for more than a decade. Ronald Reagan’s Morning in America mid-’80s also saw the birth of drummer George Schuller’s Orange Then Blue and Russ Gershon’s Either/Orchestra, which is still going strong.

Part of what sets the JCAO apart from those and other large ensembles is the shared band-leading and composing responsibilities. The orchestra tends to take on the musical personality of the resident composer who’s directing it at the moment, a cast that includes Warren Senders, Dave Harris, Norm Zocher, Jim Hobbs, and Bob Pilkington.

“I’ve always admired their ability to work as a committee,’’ says Either/Orchestra’s Gershon, who released “Wallflower’’ on his Accurate label. “Darrell is first among equals, but the composers have figured out they can get their music played consistently by working together. The orchestra has provided the opportunity for a bunch of composers to write music they wouldn’t have otherwise if there wasn’t somebody to play it.’’

Arranged, conducted, and produced by Katz, “Wallflower’’ reflects his ambitiously eclectic vision, opening with a rapturous reinterpretation of Duke Ellington’s rarely heard “I Like the Sunrise’’ from 1947’s “Liberian Suite.’’ With its darting brass filigrees, the piece is an ideal vehicle for Rebecca Shrimpton’s crystalline mezzo-soprano. She’s equally effective navigating Paula Tatarunis’s evocative lyrics on the languorous title track, which gives way to a testosterone-fueled rendition of “Hoochie Coochie Man’’ by veteran blues sideman Mike Finnigan, a juxtaposition that’s as amusing as it is bracing.

“Oliver’s approach really fit in with our group,’’ Katz says. “He was a great inspiration, and really brought out the best in the band. Whether it’s a guest or one of our regular composers, each time somebody takes the group we get into some exciting new territory.’’