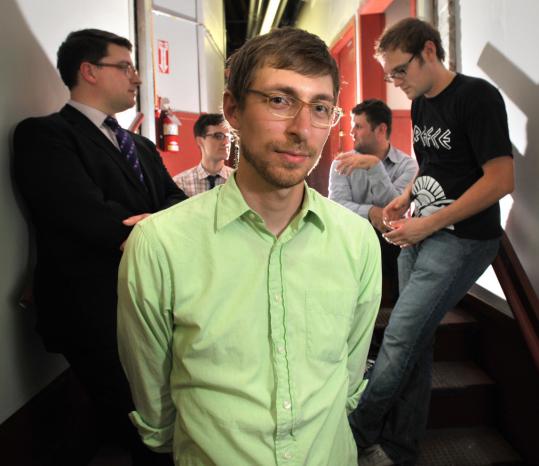 The debut album from Marconi, “Minutes to Manifest Destiny,’’ opens with the line “Coast to coast by phone’’ and ends up dropping us off somewhere in the Ice Age. Its thickly layered indie-rock fades away into a foggy classroom window view of Bering Strait migrations frozen in time. A surreal gathering of bells and quivering electronic dissonance echoes across the frost-bitten acoustic guitars, trailing off on one last unfinished note. You get the feeling that this band still has a lot more ground to cover — and that we have a lot of catching up to do.

Cultivating these kaleidoscopic road songs for the better part of seven years, he’s carried them through several cross-country moves, giving the music a strong, if ever-changing, sense of place. It’s rich territory in the hands of this songwriter, as a few close listens to the long-form melodies on “Destiny’’ reveal. The record (on the Diamond Igloo label) goes public at a release show next Saturday at Great Scott in Allston.

“Marconi’s about traveling and distance and places,’’ he says, parked in the shade on the lawn of the Cambridge Public Library, where he works part time. “The short-term perspective that you have on your own life in whatever condition you’re in placed against the condition you see historically. Comparing the two. Seeing the ways that they make sense to each other and illuminate each other.’’

Kirkland originally moved to Boston from Santa Fe in 2003 with what became one of the city’s most beloved underground bands, Night Rally, a trio with electric chemistry who traded vocals like a baton and enjoyed a shining run of DIY brilliance. They disbanded in 2006, Kirkland heading back to Santa Fe to finish his bachelor’s degree at St. John’s College.

All the while, though, Kirkland was also working patiently on Marconi, and was starting to track an album as early as 2004. Parts of the record evolved in Boston, other parts back in Santa Fe, as he performed, recorded, and mixed everything himself. Despite how fractured the process was, a definitive style took shape, at times reflecting dreamy echoes of Roy Orbison’s balladry and the shrugging majesty of the Walkmen, with David Bowie providing textural artistic mortar. The project grew into a cross-referencing travelogue rich with stories of gold rushes and transcontinental railroads.

He wrapped up the album a year and a half ago, then waited for real life to play catch-up to the recording.

Now back in Boston, he’s been gearing up for a full-tilt go at it. Last year, he recruited a hodgepodge of friends and associates from several eras and locales from his past — Chris Hislop (of Piles) on guitar, Andrew Dole (of Mystery Roar and the Bon Savants) on drums, James Towlson (of Campaign for Real Time) on bass, and fellow St. John’s grad Robert Peckham on keyboards, who moved to Boston in order to join up with the live band.

Peckham knew Kirkland during much of the project’s gestation. “Luke’s always been coherent,’’ he says later, lounging among several box fans in the band’s Central Square practice space. “Taken unto itself, there are some absurd moments. But it does a really good job of establishing a context in which things like kismet and a narration of miners in the West make sense.’’

Peckham was there for the quiet days in practice spaces with guitars and a piano as Kirkland worked on initial recordings. Slowly, overlapping textures grew over the skeletons. On “Narrow Gauge,’’ airy synths and creaking feedback swirl over the gnarled acoustic core, giving Kirkland’s lopsided croon and sidestepping falsetto some wings. It’s the character of the whole album — a sprawling orchestral lens zooming in and out on intimate guitar moments like a slider on Maps. It was a process of exploration, discovery, and constant questioning. Peckham even calls it “maieutic.’’

Hislop agrees, remembering a rare early solo performance of the material by Kirkland at the Midway Cafe in 2005. “It was evident that you didn’t even need a band playing that song,’’ he tells Kirkland. “You standing there, 6-foot-huge, with a ukulele, and the way you sang it just implied all these other parts that came to be, eventually.’’

They played their first show together in April — and next week’s release marks only their fifth, but by the sounds of things, it could mark the beginning of an auspicious next chapter in this band’s voyage.

“I’m not planning on selling out or anything,’’ he says. “But I don’t feel like I’m anywhere near as good at anything in the world as I am at music, and I feel like that’s what I want to be pursuing professionally.’’

Matt Parish can be reached at mattparish@gmail.com.

With Pretty and Nice, In Cadeo, and Baby Driver