For fans at Gillette, Bon Jovi was Saturday night, all right 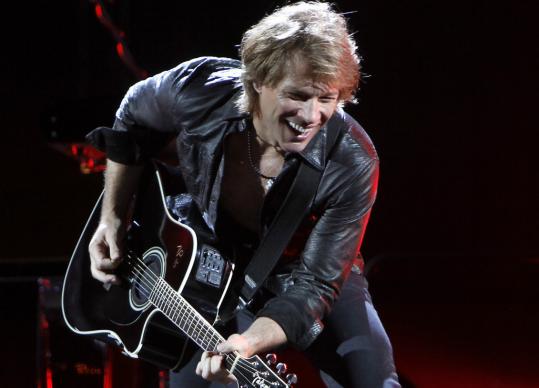 Such is the reach of Bon Jovi that it’s not even necessary to like the band at all to have known just about every song played Saturday night at Gillette Stadium. Of course, they’re so overstuffed with clichés both musical and lyrical that even new songs sound familiar, but after a quarter century of almost astonishingly consistent hitmaking, they’re practically encoded in our DNA whether we want them there or not.

No points for guessing which option the sold-out crowd preferred. The show kicked off with “Blood on Blood,’’ an album track that might have seemed an oddly obscure opener if it weren’t about the unbreakable lifelong bond between childhood friends. It established a degree of resonance for both the four men at Bon Jovi’s core and the fans who have stuck with them this long.

It also connected with the theme that Jon Bon Jovi sang about more than any other: the importance of living a life chosen by him and nobody else. He rattled off one minor variation after another: “Gonna live while I’m alive’’ (from “I’ll Sleep When I’m Dead’’), “Gotta live my life’’ (“Someday I’ll Be Saturday Night’’), “Why you wanna tell me how to live my life?’’ (“Have a Nice Day’’), “I ain’t living just to die’’ (“Work for the Working Man’’), and all of “It’s My Life’’ and “We Weren’t Born to Follow.’’

There were few surprises in the band’s mix of lite-metal, sub-Springsteen anthems and heartland rock. Despite an incongruous church backdrop, “Lay Your Hands on Me’’ was a nice, modestly subdued showcase for guitarist Richie Sambora, who handled the rough-edged vocals while his boss took a break. And the ringing, U2-like thump of “When We Were Beautiful’’ added a new dimension to the band’s sound.

But there were also missed opportunities, like the arc leading out from the stage into the audience that was ignored except for a brief stretch when Bon Jovi and his comrades simply parked themselves at the tip rather than use it to its fullest. And speaking of comrades, “Working Man’’ and “Follow’’ were accompanied by propaganda-style artwork, with the video screens blaring “Freedom,’’ “Resist’’ and “Move Forward’’ in a cross between the Soviet Union and Devo.

But when there’s a chance to belt out “Living on a Prayer’’ with 51,000 others, none of that seems to matter. Even so, despite its unflagging longevity and enthusiasm, Bon Jovi remains a band with tons of polish but little personality.

For someone who acts as though he’s saving rock ’n’ roll, Kid Rock showed a dismayingly limited imagination in his hourlong set, with the rehashed Sammy Hagar of “Rock N Roll Jesus,’’ the purloined Warren Zevon of “All Summer Long,’’ and enough charmless (if energetic) lurch to possibly claim responsibility for Nickelback and Daughtry. Dripping with benevolent arrogance, he hopped from guitar to piano to drums to the DJ booth mostly for the purpose of showing off how awesome Kid Rock is.

Local openers Mission Hill delivered muscularly over-earnest rock, dipping into “All Along the Watchtower’’ (complete with behind-the-back and with-the-teeth guitar playing) and “Feel Like Making Love’’ to grab the attention of the slowly-filling stadium.