Catching the upbeat to a new movement 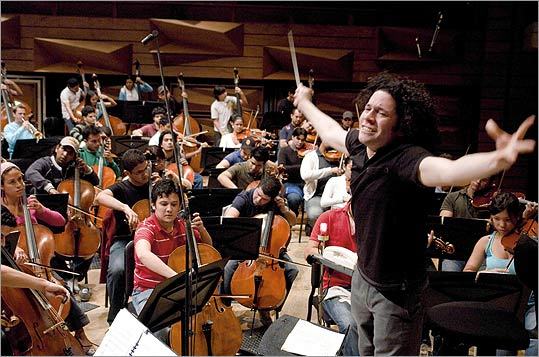 I have never seen Symphony Hall erupt the way it did that night in 2007, with Venezuela’s Simon Bolivar Youth Orchestra onstage. It was not the precision and polish of the group’s Bartok or Beethoven that set off the crowd, but the sheer expressive potency and exuberant physicality of the performance. My guess is that the music meant more to those in the audience that night because, at its core, it meant more to these players, some of whom had risen up beyond violent streets and poverty. Taking their final bows, musicians lofted their violins, trumpets, trombones, clarinets, and flutes high above their heads, as if to simply say, “Here they are: the instruments that saved us.’’

After witnessing scenes like this, it’s easy to see why El Sistema, the famed Venezuelan music program that reaches some of the country’s poorest children while producing world-class youth orchestras like the Simon Bolivar, has been capturing the imagination of performers, educators, and audience members far and wide. Last month, the inaugural class of 10 musicians and teachers known as Abreu fellows graduated from a program at New England Conservatory sponsored by El Sistema USA — the first such training program in the country — and fanned out across the United States to begin spreading the Venezuelan approach in community music programs.

That music educators and classi cal music advocates are looking elsewhere for inspiration may come as little surprise. In many US cities, orchestras are watching their sense of broader cultural relevance diminish, classical music is vanishing from television and the airwaves, and its audiences are shrinking and graying. For their part, music educators often feel embattled, watching funds being sliced from public budgets, as arts education is viewed as fat we can afford to trim.

The shortsightedness of that approach was again made clear to me during a visit to Caracas this spring. The city is dealing with electricity shortages, choking from severe traffic, and suffering from ever-escalating crime. And yet when it comes to using music to channel the volatile energies of youth, to steer the destinies of at-risk children, and to nourish the inner lives of those who have the least, the Venezuelans have figured out something remarkable.

Given all the excitement that’s been generated, some perspective is also in order. El Sistema is not a panacea, some magic elixir brewed in the south, nor does it represent an entirely different pedagogic approach than those pursued by many forward-thinking music educators already at work in the United States. That hype isn’t necessary; El Sistema is impressive on its own terms. I also believe it issues an implicit challenge to its stateside institutional champions, including NEC, to fully live up to their own ideals.

The life-charged playing that listeners heard that night in Symphony Hall tends to produce a kind of contact high for audiences. As a result one may feel the impact of this program before one understands it. One distinctive aspect of El Sistema is the way it has reframed the larger purpose of music education, broadening the discourse on music’s benefits beyond the narrow concepts of technical training, extracurricular enrichment, the cultivating of aesthetic sensibilities, or the “civilizing’’ of children to appreciate the finer things.

Instead, in Venezuela, music education is wedded to an expansive vision of youth development and social change. El Sistema’s founder, José Antonio Abreu, has said the program aims at nothing less than “social rescue and deep cultural transformation.’’ As he views it, when children can play music, they possess a weapon against one of the most destructive aspects of poverty: the loss of human dignity. He speaks of orchestras as “schools of social solidarity,’’ a place where students learn about discipline, responsibility, empathy, and citizenship.

Further, Abreu founded the program with a deep belief in the invisible, unquantifiable effect of growing up in close proximity to art, in the idea that playing so much music has a way of trickling inward. The philosopher Maxine Greene has written about the power of the arts to “release the imagination.’’ A faith in that power is near the center of El Sistema.

There is an extremely utopian, Romantic streak in Abreu’s vision, but it is hard to dismiss it out of hand thanks to El Sistema’s own track record. It was founded more than three decades ago, and today, according to its leaders, it reaches some 400,000 children, with a staggering 70 percent coming from families living below the poverty line. Leaders also report that the children in the program have a lower school dropout rate and go on to post-high school technical, vocational, or university training in higher percentages than the population at large.

Can it work in the United States? This is the question that some arts education professionals have been asking for several years. Certainly not in its entirety. Part of what makes the Venezuelan model unique is that while individual community music centers, or “nucleos,’’ enjoy a large degree of autonomy, the entire program is centralized and supported by the federal government. That unified model is a nonstarter in this country, so educators have instead focused on what happens at the local level in Venezuela, in the community music centers themselves.

In that spirit, El Sistema USA was founded in 2009. The name has been confusing to some observers, who imagine the entire Venezuelan juggernaut opening up a massive franchise in this country. That is not the case. El Sistema USA is understandably starting small, with plans to train 10 Abreu fellows each year with the hope that these fellows build their own “El Sistema-inspired’’ organizations in this country. El Sistema USA will then support, advise, and connect them in a network that it hopes will become a grass-roots movement.

It’s all very encouraging, though some context is also necessary. El Sistema USA is making this country’s first official coordinated effort to learn from the Venezuelans, but programs with missions sympathetic to the goals of El Sistema have for years been doing inspiring work, from Community MusicWorks in Providence to the Harmony Project in Los Angeles, the Sphinx Organization in Detroit, and Project STEP in Boston. Against the waves of cutbacks, some public-school music programs remain active and vibrant. Home-grown youth orchestras of course exist in most big cities, and there are two great ones in Boston alone.

What the Venezuelan model adds, beyond a powerful example of reframing the purpose of music education, is an enticement to think still bigger in terms of scale, intensity, and access. El Sistema is far more time-intensive than most such efforts here, as it requires children to be engaged in the life of the nucleo for three hours a day, five or six days a week. And while many mainstream classical and youth-music groups have some sort of diversity-building outreach programs, relatively few place this work at the core of their mission.

As a new umbrella group, El Sistema USA provides a wonderful opportunity — and also a challenge — for its host institution, New England Conservatory. The school and one of its deans, Mark Churchill, grasped far earlier than most the importance of the Venezuelan musical experiment, and the idea that NEC could help increase its impact in this country. Even before interest in El Sistema grew, the school had been involved in initiatives to widen access to music in urban neighborhoods, including the Boston Music Education Collaborative, Boston Children’s Chorus, and Conservatory Lab Charter School, which two Abreu fellows will join this fall.

Still, skeptics can be heard wondering if NEC’s ties to El Sistema are mostly cosmetic, a kind of brilliant publicity stunt that links the school to the hottest phenomenon in classical music. That charge is not warranted, yet if the school seeks the honor and credit of serving as the official bridge to El Sistema in this country, it should deepen its commitment. In addition to hosting El Sistema USA and its program to train the movement’s future leaders, NEC should itself lead by example. It should open its own El Sistema-inspired nucleo.

This could serve as a model of how the Venezuelan principles can be put into action in this country. It could have a permanent teaching staff and involvement from the Abreu fellows, but, just as importantly, it could engage a steady stream of NEC students. Currently one gets the impression, confirmed in conversation with individual Abreu fellows, that the fellowship program is rather detached from the school’s undergraduate student culture. The existence of such a nucleo would allow a much deeper integration of this work into the curriculum and the broader ethos of the conservatory itself.

Practically speaking, NEC is in the early stages of drafting a new campus master plan, so the physical space and funding requirements for such a nucleo could be integrated into that process. Founding this type of neighborhood music center at a major conservatory would project a powerful statement, and not only of NEC’s support for the local community and for El Sistema USA. It would also suggest that the school understands the changing realities of the classical music world it is preparing students to enter. Attracting the best young musicians in the country is not only a matter of having a faculty that can compete with top schools like Juilliard or Curtis. It is also about having a compelling vision of what it means to be a broadly engaged classical musician in the 21st century, and modeling that engagement in one’s own backyard.

Ultimately, it is not only those passionate about musical access and the plight of underserved youth who will be invested in the success of El Sistema-inspired programs — and their preexisting sibling efforts — in this country. It is also the embattled classical music establishment itself. Whatever the market research might be telling orchestra administrators, long-term solutions to the problem of dwindling audiences will not come from singles nights, video game takeoffs, or pop stars fronting orchestras. Gimmicks or pandering will not work. Savvy would-be listeners can sniff the desperation.

These problems will require fixes from many angles, but in the end, solutions cannot come without a radical redrawing of the map of who has a stake in classical music as an art form. El Sistema posed this challenge for itself in its first 35 years, and it has produced some impressive results, so much so that it set off a surge of international interest that has officially arrived in this country. Now the challenge for this incipient US-based movement is to harness the energy and excitement in the air, but also to build wisely and organically. There is too much of genuine value here to risk this work being mistaken for a passing fad.

Meanwhile, El Sistema is already having a salutary effect here simply by sparking discussion on these issues, by reenergizing some longstanding leaders in the field, and by inspiring a group of new recruits like the Abreu fellows to find the right place, roll up their sleeves, and start teaching music.

Last in a three-part series. Read the first and second installments.
Your comment is subject to the rules of our Posting Policy
This comment may appear on your public profile. Public Profile FAQ