Thomas a sure hand at Tanglewood 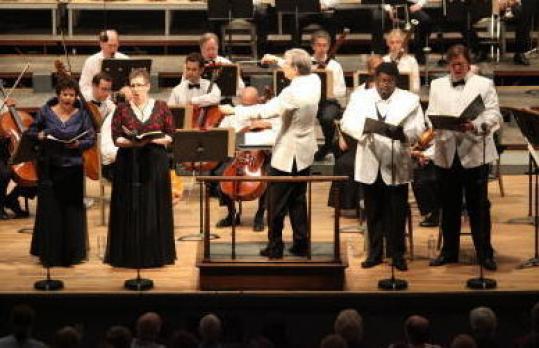 LENOX — In his visit to Tanglewood this summer to replace the recovering James Levine, Michael Tilson Thomas has been swept into the full range of campus activities, working not only with the Boston Symphony Orchestra but also with the students of the Tanglewood Music Center. Both facets of his work were on view this weekend, when he deftly led the BSO Friday night in a reprise of its Stravinsky-Mozart program from this year’s Symphony Hall season, and on Saturday drew energized performances from the Tanglewood Music Center Orchestra and gathered vocal forces in Mahler’s epic Third Symphony.

Friday’s program featured Stravinsky’s “Symphony of Psalms’’ and Mozart’s Requiem, an attractive and evocative pairing devised not only by Levine, but also by the great choral conductor Robert Shaw, who gave the first Tanglewood performances of both works in August 1947.

Stravinsky’s remarkable piece, a BSO commission from 1930, contains the composer’s neoclassical settings of verses from three psalms (Nos. 39, 40, and 150, in the King James numberings). It’s a work of austere and distinctive beauty, full of coolly astringent choral writing. This was a surely paced, elegant performance with fine singing from the Tanglewood Festival Chorus, conveying by turns the restrained serenity and the disquieting mystery at the core of this music.

Like the works of Bach, Mozart’s choral music and even the symphonies whose names don’t contain the word “Jupiter’’ are these days increasingly becoming the province of early music specialists, which usually means smaller ensembles and leaner sonorities. The hefty dimensions of Friday’s Requiem performance then made it feel like something of a throwback, but one with plenty of rewards, as Thomas and a keenly responsive chorus brought out the pathos and dark drama of this work, particularly in the “Rex Tremendae,’’ “Confutatis,’’ and “Lacrimosa’’ movements. Soile Isokoski, Kristine Jepson, Russell Thomas, and Jordan Bisch were the capable soloists.

Saturday night, the BSO had the night off and the young musicians of the Tanglewood Music Center Orchestra filled the stage of the Koussevitzky Music Shed for Mahler’s Third, a kind of expansive late-Romantic cosmology with movement titles (later abandoned by Mahler) such as “What the flowers in the meadow tell me,’’ “What humanity tells me,’’ “What the angels tell me.’’

As the founder of the New World Symphony, an orchestral training academy, Thomas has abundant experience working with advanced music students in the core symphonic repertoire. From the rousing opening horn solo to the ferocious eruptions from the cellos and basses early on in the first movement, it was clear these young players (mostly in their 20s) were inspired by the occasion.

This massive work imposes enormous technical demands, and at a few moments the group sounded taxed beyond its resources, but mostly the players delivered polished and impassioned music-making. The American Boychoir and the women of the Tanglewood Festival Chorus turned in lively performances, and mezzo-soprano Karen Cargill was the poised and eloquent vocal soloist.

Thomas’s interpretation was strong on local drama but at times less successful in conveying a broader sense of the music’s architecture and sweep. In the symphony’s legendary finale, a grand rolling adagio, he drew an appealingly rich tone from the Tanglewood Music Center Orchestra strings, but the tempos felt curiously inert and at times labored. This was apparently a minority opinion; the crowd’s ovation was swift and spirited.