It’s all fun and games

Whether he sings about life or about sports, Howie Newman has a ball 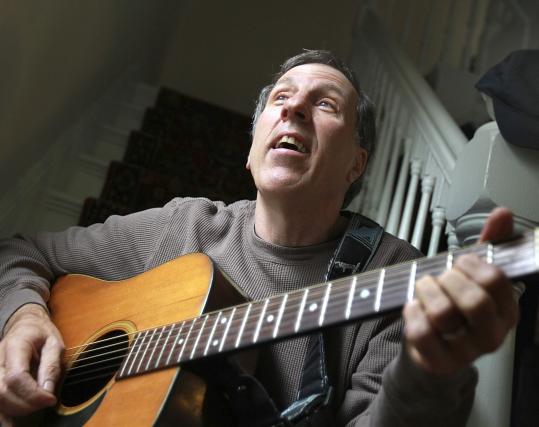 Howie Newman has written a full lineup of baseball tunes — he first slugged his way into the public consciousness in 1976 with a single titled “Blasted in the Bleachers.’’ But he’d like to be known for more than that.

“Only about 10 percent of what I do has to do with baseball,’’ he said.

The Melrose singer-songwriter can’t downplay his contribution to the genre, though. Two of his four CDs have been accepted into the National Baseball Hall of Fame Archive in Cooperstown, N.Y. It’s just that he’s sensitive to other aspects of life — and puts lyrics and melodies to them. He tackles the bittersweet elements of midlife dating and other relationships. He addresses getting up in the morning and staying up past bedtime. He looks at the maddening quirks of driving in Boston and talking on a cellphone. He strikes a blow at the inconveniences of snow.

“I try to be a little outside the box,’’ said Newman, 59, who’ll perform next Thursday night at 8 at the Harvest Cafe in Hudson. “On the other hand, I sing about things that people understand. With some songs, you don’t know what they’re about. That doesn’t happen with any of my stuff.’’

His songs are upbeat, with a taste of jazz, swing, country, bluegrass, pop, and folk. He prefers a small stage: a cafe, restaurant, or coffeehouse.

“Ideally, people are there to listen and are up for being entertained,’’ Newman said. “When that happens, I can really engage the audience and get them to participate and laugh. They become part of the show, which makes it fun for everybody.’’

“You can’t do comedy in a vacuum; you’ve got to have people listening,’’ said Newman, a native of Brooklyn, N.Y., who has lived in the Boston area since attending Northeastern University. “It’s a lot of fun when you feel that energy in the room and everybody’s focused on the music.’’

Given his love of sports — he plays Sunday morning softball, coaches a women’s softball team in Brighton, skates with a pickup hockey group, and frequently attends pro sporting events — writing songs about baseball came naturally. His first Hall of Fame collection, “Baseball’s Greatest Hits, Volume 1’’ (a vinyl EP released in 1979), was reissued on CD in 2001. “Baseball’s Greatest Hits, Vol. 2,’’ featuring “Mendoza Line’’ and the R.E.M. parody “It’s the End of the Curse and We Know It,’’ followed in 2008.

Newman was a full-time musician from 1973 to 1983 before stashing away his Martin six-string to join the knights of the keyboard. He was a sportswriter for the Middlesex News, Lynn Daily Item, Patriot Ledger, the Globe, Associated Press, and Lowell Sun. He covered all seven games of the 1986 -Mets World Series for the Item.

Still, his heart was beating for music, and he got back on stage in 2001. He has since released his “dream’’ CD, “Trust Me, You’ll Like It,’’ featuring a potpourri of musical styles and three cuts with references to his wife, Ellen. His daughter, Jen, 23, contributes backup vocals on five of the 13 songs.

“I always wanted to record an album where I would experiment with different kinds of music and bring in really good, top-of-the-line musicians,’’ Newman said. “I wanted an album that not only had good songs on it but was really good musically.’’

He pulled it together with his dream team of artists, most notably Duke Levine on guitar and mandola, Billy Novick on clarinet and saxophone, and Jim Gambino on piano.

Occasionally, he performs with his daughter and his son, Keith, 18, who sings and plays flute. The trio will perform at a private event in Somerset June 20. Said Newman, “That’s the best Father’s Day present.’’

Newman appears to be achieving his objective every time he performs.

“His presentation is a lot of fun — everybody laughs their butts off — and very easy to listen to because he talks about real human issues, things that are important to him and touch everyone,’’ said singer-songwriter Janet Feld, who cohosts, with Newman, the Music in Melrose Coffeehouse Open Mic Night series, which runs monthly September through May at the Church of the Nazarene. “When we’re hosting an open mike, I let him tell all the jokes. And I’m a funny girl, too.’’

Steve Brooks, who manages the Javawocky Coffeehouse in Brockton — where Newman opened for headliners Steve Gretz and Leslie Lee in April and will do his own show in November — enjoys the singer’s “smooth banter between songs. He doesn’t just get up there and play song after song. He puts on a really good show.’’

In his first tour of duty, Newman opened for Tom Paxton, Brewer and Shipley, and Pure Prairie League. During the resurgence, which began in 2001, he has warmed up the crowd for Bill Staines, Don White, Vance Gilbert, and Modern Man, among others.

Newman recalls opening for Pure Prairie League in front of 1,500 people at Smith College in 1979. “That was the biggest audience I’ve ever played for,’’ he said. “I was hanging out with members of Pure Prairie League before the show, and they were most friendly and gracious. It was like being a rock star for a night.’’