Endlessly devoted to his music 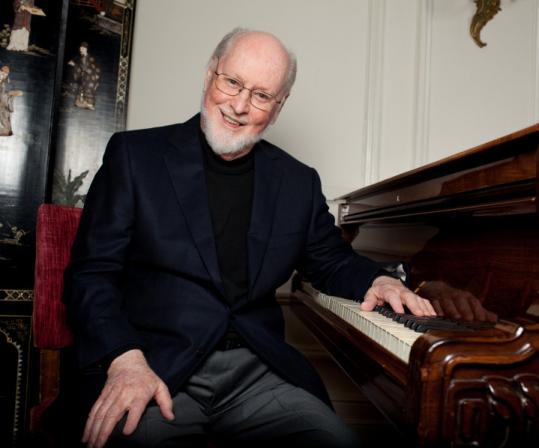 John Williams will celebrate his 30th anniversary with the Boston Pops starting tonight at Symphony Hall in Boston. (Matthew Cavanaugh for The Boston Globe)
By Joan Anderman Globe Staff / May 11, 2010

LENOX — He has 21 Grammy Awards, four Golden Globes, and five Oscars. He has composed music for four Olympics, the “NBC Nightly News,’’ President Obama’s inauguration, the Statue of Liberty’s rededication, and Darth Vader’s entrances. “Star Wars’’ is one of more than 100 film scores he’s written, and with 45 Oscar nominations, he is the second-most nominated person after .

Of course John Williams knows how he should be memorialized on the occasion of the Boston Pops’ 125th anniversary.

“Put in a couple of sentences between Fiedler and Lockhart,’’ he suggests, teacup delicately in hand and ego typically in check.

Williams, who spent 14 seasons on the Symphony Hall podium as the Pops’ music director and is celebrating his 30th anniversary with the orchestra this year, is back in Massachusetts for his four-night “Hooray for Hollywood’’ film-music series with the Pops at Symphony Hall, tonight through Friday. He’ll return for the month of August to perform at Tanglewood, where he is artist in residence.

Williams has come here every year since 1981, and every year the kind proprietors of the Blantyre Hotel, an opulent country estate near Tanglewood, shuffle chairs and sofas in Williams’s favorite cottage to make room for the Steinway grand piano he has delivered for the duration of his stay.

A day without a piano is not an option because Williams composes every day, 6 1/2 days a week, inspired or not, wherever he is. He has no hobbies and rarely vacations. At 78, John Williams is a music-making machine.

“You have a good day, you have a bad day, next week you look at what you wrote last week and it’s rubbish and you throw it out,’’ says Williams, who is the picture of refinement in a dark jacket, black knit shirt, and gray trousers, with a neatly trimmed beard and rim of white hair. “I write all the time, not so much for pleasure but mostly from habit, which is what anybody who writes anything needs to do. It’s pretty good, or it isn’t, and I try to do better next time.’’

Impeccably gracious and unerringly modest, Williams seems more like a genial professor than an industry powerhouse. It’s not false modesty, according to his daughter Jenny, a psychotherapist who practices in Beverly Hills, Calif. Rather, it’s that “my dad wouldn’t be caught dead saying anything good about himself. He believes that no one should. It’s impolite.’’

That makes Williams the exception to the rule in Hollywood, where self-promotion is de rigueur and clawing the common mode of transport to the top. Williams did it the old-fashioned way: with unswerving focus on his work, to the exclusion of almost everything else.

At home in Los Angeles, he takes a one-hour break from writing each day at dusk, he says, to walk at a golf course near his house. After his walk he returns to the piano, working until he has finished the day’s writing task: two or so minutes of music. Williams has just completed a chamber music piece for the La Jolla Music Society’s SummerFest in California and the score for “The Adventures of Tintin: The Secret of the Unicorn,’’ a Steven Spielberg movie due out next year. He lives with his second wife, Samantha Winslow, in an unpretentious house on a quiet street in Westwood that he bought nearly four decades ago. (Full disclosure: I grew up down the street and was close with his children.)

“I wasn’t around very much, was I?’’ Williams muses of the time when his children were teenagers. No, he wasn’t.

He was, however, spending a lot of time around Spielberg, with whom he enjoys one of the longest-running creative collaborations in the entertainment industry: “Tintin’’ will be their 24th feature film together. Over 37 years Williams has scored all but one of Spielberg’s films — Quincy Jones brought “The Color Purple’’ to the director and had dibs on the music — and their offices in the complex on the Universal lot are within shouting distance.

Spielberg says their relationship is as effortless as it is deep.

“We mainly laugh and giggle and joke,’’ Spielberg writes in an e-mail. “I’ve often said that when Johnny sees one of my movies, he does a musical rewrite and makes the picture so much better than I ever could have imagined. His music has deepened the souls of characters, and lends an almost ineffable meaning to the stories we’re telling.’’

Williams was already a success in the film world, with “Jaws’’ and “Star Wars’’ and “Superman’’ under his belt, when the Pops tapped him to lead the orchestra in 1980. He was a left-field choice to follow Arthur Fiedler, a vivacious and popular Boston native, but looking back it made a lot of sense, says current Pops conductor Keith Lockhart.

“The Pops looked for somebody who was not confusable with Fiedler, whose fame was assured for something else, and it was a wise decision,’’ says Lockhart. “John brought his own music and also a kind of West Coast star power that the Pops had never had before. All of a sudden you were seeing Tom Hanks at Symphony Hall. It was a connection to a different audience. I always say thank God for John Williams, because if it wasn’t for John a lot of people would never have heard symphonic music.’’

Williams acknowledges that it was “a no-risk deal.’’ It was also a welcome change for someone who had for many years lived the cloistered life of a composer and whose musical interactions unfolded in the sterile environment of recording studios. Williams says it’s only in hindsight that he came to understand the critical role leading the Pops played in his life.

“The important thing to me in the end wasn’t the music or the composer or the audience or the orchestra. The important thing was the connecting link, the nexus if you like, whatever spiritual thing happens when people are moved by music that someone has written and someone is playing. The audience completes that triad, and that communication, that elusive interaction, is what we live for, and that feeling has grown through the years.’’

It’s a lesson that extends beyond the concert stage. Jenny Williams says that it’s only in the post-Pops years that she has developed a close relationship with her father.

“He’s a sweet, dear person but he doesn’t think about the normal things a lot of people do,’’ she says. “He always had his nose to the work, that’s why he’s good. And that’s sort of tough. But my father is definitely my best friend, and I may be at least one of his, and it really happened in the last 10 years. And a lot of it has to do with playing golf. He may have been shy about telling you, but that walk he’s talking about is really nine holes of golf.’’

Williams isn’t shy about confronting the question of whether his commercial film work has damaged his credibility in the concert world. Film music has always been treated with condescension by the critical press, he says, noting with a laugh that on more than one occasion they have been justified.

“I don’t feel frustrated that I don’t have the time or the ability to do this or that. I just want to produce the best work I’m able with whatever musical and intellectual equipment I’ve been given. Let it be judged by others in the way they want to,’’ Williams says. “The work I’ve done in the concert area is, at least in my mind, very modest measured against the giants.’’

Among his contributions to the concert stage are two symphonies, numerous concerti, a seven-piece song cycle based on the text of former US poet laureate Rita Dove, and a new work for harp and orchestra that James Levine premiered at the Boston Symphony Orchestra’s 2009-2010 season-opening concert.

Williams believes that the good health of symphony orchestras may well rely on a creative synthesis that draws from both high art and popular culture.

“Maybe we’ll have to move out of the horseshoe-shaped box of Symphony Hall and into an area where we can have atmospherics and lights and so on,’’ he says. “Look what’s happened with 3-D films and ‘Avatar’ and so on. You can have some very ordinary ideas presented in such an enhanced and brilliant way, it’s almost like a new medium.’’

Until that time Williams will return to the hallowed hall as conductor laureate. It is, he says, not simply an honorary duty, but a great pleasure. He speaks of the Pops and Tanglewood with something that sounds an awful lot like tenderness.

“It’s a relationship certainly in name, but also on my part there is a strong emotional connection with the institution,’’ Williams says. “It’s almost a kind of family relationship that has evolved. But no demands are put on me. It’s the best kind of relationship.’’

Williams leads the Pops tonight through Friday at Symphony Hall. Tickets: 888-266-1200, www.bso.org. Joan Anderman can be reached at anderman@globe.com.