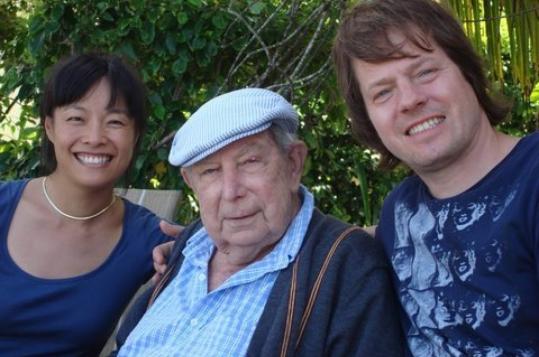 Mira Wang and Jan Vogler dedicated the work they are premiering with the BSO to violinist Roman Totenberg (center).
By Jeremy Eichler Globe Staff / February 7, 2010

Like many married couples, Mira Wang and Jan Vogler deal with the stresses of maintaining two busy careers. But they also have some unique marital challenges, like for instance expanding the repertoire of double concertos written for the violin and cello. Because, you know, there are days when Brahms just won’t do.

Wang, a Chinese-born violinist, and Vogler, a German-born cellist, are the driving force behind the commissioning of a new work written by John Harbison, a double concerto they will premiere this April with the Boston Symphony Orchestra under the baton of James Levine.

The back story behind the piece ties together three continents and two generations of immigration to America. It’s also about a grateful soloist wishing to honor the teacher who made her life in music possible.

Wang, who these days lives in New York and Dresden, began studying violin in China where she had very limited access to recordings. She was acquainted only with some of the field’s bigger names like David Oistrakh, Jascha Heifetz, and their contemporary, Roman Totenberg, whose Bach album she loved.

When she was 16, the Chinese government sent her to Poland to compete in the junior division of the Wieniawski Violin Competition, and to her surprise, Totenberg himself was on the jury. Wang did not speak a word of English, but as she recalled two decades later, she could immediately sense his kindness. With help from a translator, she wrote a letter to see if studying with him in the US would be possible.

Totenberg, a Polish-born virtuoso who settled in this country and eventually segued from an active soloist’s career to a life of teaching at Boston University and elsewhere, said yes. He even invited Wang to live with his family while she learned English and adjusted to life in this country. Arriving in 1986, she remained his student at BU for six years, and continued private study after graduating, eventually becoming a virtual adopted daughter in the Totenberg family.

“I learned many things from him musically of course but the other part of his influence was the kind of person he is, how he treats life,’’ said Wang in a recent phone interview. “His is the great example of the life of the immigrant, the positive attitude toward the new country. And I learned that how you treat life, eventually, comes out in how you make music.’’

When Dresden-based supporters of Wang and Vogler (the cellist directs a German chamber music festival) offered to commission a piece for them, the musicians jumped at the opportunity to bring a new violin-cello work into the world while at the same time honoring Wang’s teacher, who is its dedicatee.

Reached at his home in Newton, Totenberg, a humble and unerringly courtly man who is now 99 and still teaching, said he was flattered by the gesture. “Harbison is a wonderful composer and the performers are in a way like my children, so I’m very happy about it. I hope it will be a lovely piece,’’ he said, adding with a twinkle of pedagogic pride, “and I’m sure they will play it very well.’’ Would Totenberg himself be in attendance? “Of course,’’ he said. “Even if they bring me on a stretcher. But, I hope they won’t have to. I feel fine.’’

The new double concerto is in fact the second foray into this genre for Harbison, his first being the Double Concerto for Oboe and Clarinet, a piece from 1985 that imagined an intensely argumentative musical relationship between the two soloists. This time, said Harbison, knowing the soloists are a married couple inspired him to explore other models of musical dialogue.

“I didn’t want the discussion to be a wrestling match, in part because it felt like I already did that,’’ Harbison said by phone. “The relationships between the players in this new work change, but it’s a lot about responding to one proposal with a slightly different version of it, a little bit like the phenomenon of mishearing or misunderstanding.’’ In the final movement of three, the orchestra plays a tune in simple octaves, a feat that the two soloists struggle mightily to match. They get there in the end. A brief coda requiring an invented percussion instrument brings the 25-minute work to a close.

Rehearsals have not begun so Wang and Vogler have not yet heard the piece with orchestra. Still, the violinist said she is already very fond of it and insists that, since she and her husband have ample opportunities to perform together, this work will have an afterlife greater than many new compositions, which too often gather dust after their premieres.

“This is a dream come true for Jan and me,’’ she said. “There’s so much meaning in this piece. We will bring it very far.’’

Jeremy Eichler can be reached at jeichler@globe.com 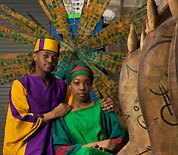 THE BOSTON SYMPHONY ORCHESTRA under James Levine gives the premiere performances of John Harbison’s Double Concerto on April 8, 9, and 10 in Symphony Hall, with violinist Mira Wang and cellist Jan Vogler as soloists. 617-266-1200, www.bso.org.