Putting it all Together

The pages of Boston’s rock history are littered with bands that helped to define their generation (Aerosmith, the Pixies) and modern ones that blazed their own crooked trails (the Dresden Dolls, Passion Pit). We’re fond of saying there’s no “Boston sound,’’ per se, but when you get down to it, this is a rock city.

We’ve made stars out of other kinds of performers (folk matriarch Joan Baez, jazz pianist Chick Corea, country singer Jo Dee Messina), but one particular genre tends to get overlooked, a niggling point that will be addressed this week with the inaugural Together: The New England Electronic Music Festival.

It’s an ambitious endeavor - a six-day festival, starting tomorrow through Feb. 14, with more than 40 events and 100 artists - and creative director David Day and his fellow organizers have worked hard and fast. In a little more than five months, they’ve assembled a schedule ranging from DJ classes and free panels to 18-plus events and concerts, all happening in various venues.

Befitting its name, Together has united a segment of the local nightlife scene that works tirelessly not for the money (what money?) but as a labor of love. And they realize that with Boston as a background, their event will have a decidedly local flavor.

“Every festival really is defined by the city it’s in,’’ Day says. “In Miami, it’s beaches and beautiful bodies and trance music. Detroit is obviously gritty techno, urban music. What’s going to define our festival is the educational bedrock that’s already here. We have the students, the studios, the continually young population that’s playing and creating music on their computers.’’

It also makes sense given Boston’s lesser-known history with electronic music, which, for the sake of narrowing the festival’s scope, organizers are defining as music with roots in house, rave, techno, and experimental. Fred Giannelli, an early techno pioneer, grew up in Salem. DJ and producer Armand Van Helden, a Boston native, got his career off the ground here. And last year’s biggest local band to break out was Passion Pit, whose infectious sound is heavily indebted to various strands of dance music.

Yet just because an idea sounds good over beers among friends doesn’t mean it’ll come to fruition. Day remembers there was initially skepticism even within the local nightlife community.

“There was a lot of ‘good luck with that’ kind of mentality, mostly from some of the older promoters and producers who have been doing this in Boston in anonymity forever,’’ Day says. “And some of them are still in a wait-and-see moment. They’ve encountered this rockism of Boston where their music has never been considered real music.’’

But Together’s organizers were heartened when they created a Facebook page for the event in December and had nearly 2,500 members in about a week.

“It lends an air of legitimacy to our scene,’’ says Jamie Michalski, who’s in charge of the festival’s youth outreach and also spins around town under the name DJ Die Young. “Dance music, maybe to some people, is seen as nihilistic or frivolous, but to us, it’s our whole world. To be able to share that enthusiasm with other people who feel the same way, you realize that maybe you’re not religious, but dance music is church.’’

Together is the kind of festival Michalski, 26, would have loved as a young DJ who grew up in Amesbury and got inspired by the DJs he’d see at Avalon and Axis, the legendary Lansdowne dance clubs that are now defunct.

“When those two places shut down [in 2007], I think that was the best thing that could have ever happened for the city in terms of kids doing it themselves and doing their own nights,’’ Michalski says. “I think the beauty of Boston’s situation is that there’s a refresh of everyone every four years.’’

And Day is counting on that crowd to help make Together a success its first year out. He says he knew Boston could pull this off after attending a similar event last year in Colorado, another electronic music festival on a small scale but with big aspirations.

“We picked up five guys from New Mexico, and I thought, here’s this little music festival pulling in people who traveled 300 miles,’’ Day says. “That really was the moment where I was like, ‘We can do this.’ Now I want a car full of kids from New Hampshire piling out on a Friday, looking for their Boston experience. And we’re going to give it to them.’’ 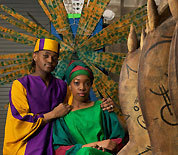 TOGETHER: The New England Electronic Music Festival At various venues around town tomorrow through Feb. 14. For a full schedule, go to www.togetherboston.com