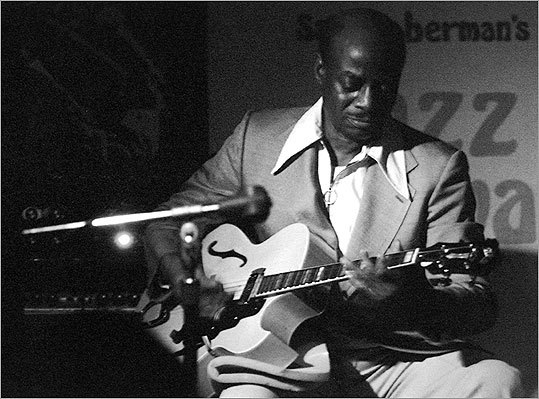 BEVERLY - Two separate efforts to revitalize jazz on the North Shore are now playing in harmony.

Filmmaker Henry Ferrini and website designer Chava Hudson started the North Shore Jazz Project last year with plans for an Internet site, concerts, education programs, and ultimately a cable TV show. Their effort is fueled by memories of the days when Sandy’s Jazz Revival at 54 Cabot St. in Beverly and Lennie’s-on-the-Turnpike in Peabody and later Danvers made the area a destination for many jazz greats.

“Part of the mission of this whole project is to re-create the North Shore as a jazz oasis,’’ Hudson said.

Meanwhile, Beverly restaurateur Richard Marino wanted to expand his Chianti Tuscan Restaurant at 285 Cabot St. into the former liquor store next door. His plan: a nice, intimate lounge that would offer the same kind of music as was once heard at Sandy’s. His interest was given extra fuel by a coincidence: In 1999, he bought the late club owner Sanford Berman’s old house nearby, without realizing who’d owned it.

“I was sitting at my dining room table with a pile of restaurant paperwork one night, and a neighbor walked in and said it looked just like when Sandy used to sit there with a pile of jazz paperwork,’’ Marino said.

Years earlier, music lover Marino had stopped to look inside the shuttered Sandy’s before it was torn down for a condo development; a Sandy’s regular named Ferrini happened to be there and offered a tour. You can guess the rest: The North Shore Jazz Project held its first fund-raiser at Chianti’s in November, a jam-packed event christening the restaurant’s new Jazz Lounge before the paint was dry.

“In a very small way I got to experience a day in Sandy Berman’s life,’’ Marino said. “I got to wake up in his house, I walked up to my Cabot Street little jazz room, I served some of the same people he served, with photos on the wall of people who played in his place, and then I walked back to his house and went to sleep. So I guess I really had the Sandy Berman experience there for a day, and I liked it.’’

A second North Shore Jazz Project fund-raiser is scheduled for Sunday afternoon at Chianti, featuring Barrence Whitfield and Preacher Jack. Tickets for the benefit are $17 in advance, $20 at the door; for more information, visit www.northshorejazzproject.org.

The Berman family opened a dining and dancing club at the Cabot Street site in 1932 and switched to jazz in ’33; Sandy took charge in 1950. Lennie’s opened on Route 1 in West Peabody in the early 1950s, and owner Lennie Sogoloff moved it just up the road to Danvers after a 1971 fire.

Both venues featured a lineup of jazz giants, names like Dizzy Gillespie, Miles Davis, Louis Armstrong, and Erroll Garner. Blues greats like Muddy Waters and Howlin’ Wolf also hit their stages. But a variety of circumstances, including the changing music business, led to Lennie’s closing in the 1970s, and Sandy’s in the mid-1980s.

“Those guys presented world-class music on the North Shore for over 50 years, and nobody does that anymore. It really requires a love of the music to do that,’’ Ferrini said. “That’s why it’s happening. We’re putting in the time to try to make it work.’’

A longtime area resident, Ferrini was part of a group that tried to revive Sandy’s as a nonprofit music center after Berman’s death in 1991. Now he and Hudson are recruiting both performers and behind-the-scenes players from Boston’s jazz scene for an ambitious effort this year, with the TV show as their brass ring. For a pilot episode, they hope to bring together Beverly High School musicians with name jazz performers.

When he’s not running Chianti, Marino plays bass in a rock cover band, not a jazz group, but he’s hopeful the scene can catch at least a little bit of flame again. In decorating the Jazz Lounge, he retained a wall of old beer-cooler doors from the former tenant; the small glass doors now serve as display cases for black-and-white photos of jazz performers onstage at Sandy’s, provided by a Newburyport collector, Peter Riley.

There are 35 seats facing the small stage, plus 12 more at the bar; Marino will open the room for regular performances on weekends beginning Jan. 17. Some people he talked to at the previous fund-raiser, he said, were Sandy’s regulars in the old days.

“A lot of people have connected the dots even more than I have. . . . I love jazz, but I moved here after that era had really come to an end,’’ Marino said. “The synergy and the timing with the North Shore Jazz Project is almost poetic.’’