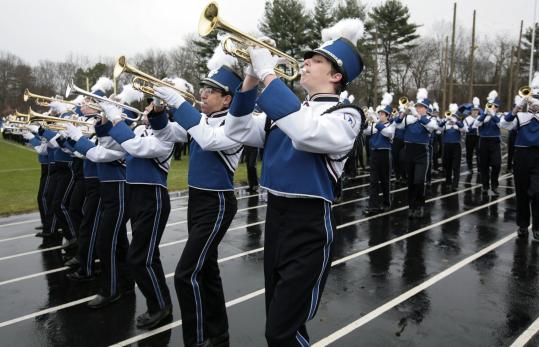 The Falcon band performs at Deering Stadium in Danvers during a preview of the field show it will perform during its trip to California next week. (Photos By Aram Boghosian for The Boston Globe)
By Wendy Killeen Globe Correspondent / December 27, 2009

When the Danvers High School Falcon Marching Band makes its way down Colorado Boulevard in Pasadena, Calif., on New Year’s Day, it will be making Massachusetts’ history.

It’s the only high school band in the state to participate in the Tournament of Roses Parade three times, having previously marched in 2001 and 2006.

Ron Parsons, director of the band since 1987, said this year’s 150 marchers and color guard members “have trained hard and are well-prepared. They’re just waiting for their moment now.’’ The band, and more than 300 parents and supporters, are scheduled to fly to California today.

Based on an audition tape and past performances in the parade, the band was chosen from 44 others in the Northeast. In all, 16 high school bands from around the country were selected to march. The application process takes about two years, Parsons said.

The Falcons have been preparing since they got the nod in October, practicing night and day and performing at Friday night football games.

The band has raised close to $50,000 to help fund the trip, in addition to what each band member pays.

While this is a three-peat, there are many firsts this year.

There are now eighth-graders in the band. And, it will truly be a family affair for Parsons, as his wife and administrative assistant, Judy, and their two sons, who are band members, are all traveling west.

The band will also perform a field show at BandFest on Tuesday at the Pasadena City College football stadium. In the past, only a few of the bands participated in BandFest, but this year all the parade bands have been invited.

“Both are equally important,’’ Parsons said of the 5.5-mile parade and BandFest. “It’s been a dual push for two events. We’ve had quite a challenging 15 months.’’

While the theme of the 121st Rose Parade is “2010: A Cut Above the Rest,’’ the Falcons chose “America Let Freedom Ring’’ as the theme for its BandFest performance.

It includes narrated historical readings and songs such as “When Johnny Comes Marching Home’’ and “Battle Hymn of the Republic.’’ At the end of the show, the marchers unroll and carry a large American flag across the field.

In a break from Rose Parade tradition - which doesn’t usually allow individual bands to carry the American flag - the Falcons were also given permission to carry their flag in the parade.

And the band will be last in line, with a finale designed around its patriotic theme. As it turns the corner onto Colorado Boulevard - the longest stretch of the parade where almost a million people watch - there will be a B-2 Stealth bomber flyover.

On a recent rainy and cold Saturday, the band previewed its field show for a supportive crowd.

“That was awesome. Absolutely amazing,’’ said Melaney Fodera, who came because she goes to the same church as Parsons. “I am so proud of them.’’

Cameron Hunt, drum major along with Taryn Pydynkowski and Jill Wayrynen, said, “We all love this band a lot. For the last 15 months, we have just been working to get ready for the Rose Parade. We’re ready to blow California out of the water.’’

After the show, Bob Mulvanity, a 1977 graduate of Danvers High who has been the band’s visual designer and drill instructor since 2001, told members, “I am confident you are going to represent this town as it’s never been represented to the world. I want to get out there and show what we have.’’

According to the Tournament of Roses Association, about 1 million attend the parade, and another 40 million Americans watch on television. The parade is also broadcast to millions in more than 200 international territories and countries.

“You’ve done what a lot of kids your age can’t do and won’t do: stick to something for a long time with a goal way off in the distance,’’ Parsons told the band. “You should feel good about that. Now, it’s time to bring it all together and sprint to the end.’’