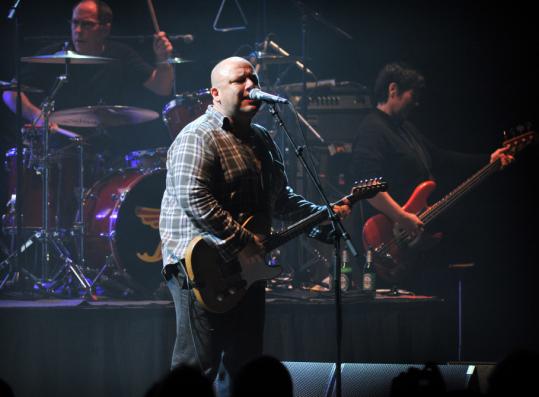 The full album concert concept that has become so popular in the past few years is on one level a gimmick to help juice catalog sales and draw out those less inclined to see a group they’ve already spent time and money on. But with a record as exhilarating and irresistible as “Doolittle,’’ it’s easy to understand the desire for both seminal alt-rockers the Pixies and their audience to want to party like it’s 1989.

It felt appropriate that the University of Massachusetts-spawned group was hitting the Hub around homecoming because the 94-minute show - the first of two sold-out gigs at Citi Wang Theatre - felt like a reunion with old friends. A big, loud, dry-ice-infused, sense memory-generating reunion of sticky melodies and squalling guitars. Sure, everybody’s gained a few pounds and lost a few hairs, but the spirit was there, from David Lovering’s first crisp downbeat and Frank Black’s throat-shredding scream.

Old-school fans and younger folks getting their first live taste of the group screamed right along to the outbursts from “Monkey Gone to Heaven’’ to “Dead.’’ The crowd bounced en masse to the rhythmic left turns of “Crackity Jones’’ and bopped to “Here Comes Your Man’’ with Black and bassist Kim Deal aptly replicating their metal and smoke harmonies. “Wave of Mutilation’’ got two spins, with the original coming in its spot and the whisper-smooth “UK Surf’’ flavor popping up in the encore.

Deal, a propulsion machine throughout, was also the evening’s appointed tour guide, giving in-progress announcements -- “we’re halfway through the first side’’ - accompanied by her goofy grin.

The band buttressed the 40-minute centerpiece with a quartet of b-sides from the album and encores chock full of assorted non-“Doolittle’’ favorites. Those included the juicy big beat drone of “Into the White,’’ complete with a cloud of hazy dry ice, the chilly coo and growl of “Where is My Mind,’’ and the clangorous and celebratory “Gigantic.’’

THE PIXIES With Jay Reatard