Instrumental to his work and play

A keyboard maven shows off the tools of his venerable trade

“It started with my falling in love with the harpsichord, at age 13, through an LP that my mother brought home from the Stop & Shop called ‘Greatest Harpsichord Hits,’ ’’ he remembers. “There was something about that sound that absolutely captivated me.’’

Having just bought a new piano, his parents balked at a harpsichord, so Sykes began to build his own from kits.

Now an internationally-known performer, he no longer makes instruments “as a kind of day job,’’ as he once did, but his collection of over 20 instruments (of which a dozen reside at First Church) has continued to grow, a resource for local performers and Sykes’s students.

Only one of his pieces is a period instrument. “If all these were antique harpsichords, it would be like having a collection of Stradivarius violins,’’ he says. “These are tools - they’re moved in and out for concerts, and I’m playing them constantly. . . . These instruments are going to outlast me, but, on the other hand, I’m going to squeeze every drop out of them that I can while they’re here.’’ 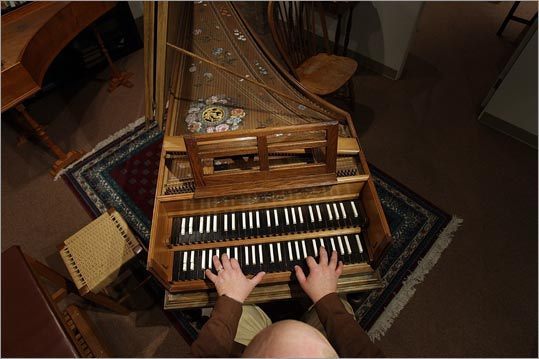 “There was a young man in Boston in the late ’70s named Tom Pixton, who was a performer and made his own harpsichords much the same way I did,’’ Sykes says. Pixton brought this instrument to Sykes’s house, hoping that he would buy it. “I fell in love with it, but I had no money.’’ Three years ago, Sykes saw it for sale online. “I drove to Toronto in order to get it. So now it’s back home. It’s sort of a quasi-famous instrument - it’s known as the ‘Spruce Goose’ because the entire instrument is made out of the same wood as the soundboard, Alaskan spruce, which causes a particular dark kind of resonance which other harpsichords don’t have.’’ 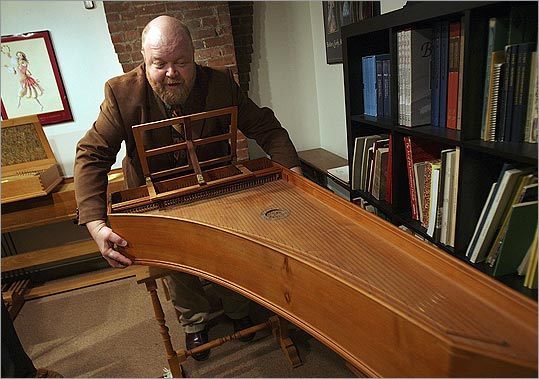 Sykes bought this instrument - which he calls the “laptop’’ because it weighs only 25 pounds - with money from the 1993 Erwin Bodky award, given by the Cambridge Society for Early Music. The keyboard features split sharps - two keys where a piano would have only one - enabling subtleties of older systems of tuning. Based on an instrument from the 1580s, “it’s a very small, a very early kind of harpsichord, but interestingly enough, because it can move around so easily, I take it to a lot of places,’’ including Cambridge’s Lizard Lounge, for a performance of 17th-century music that can be seen on YouTube. 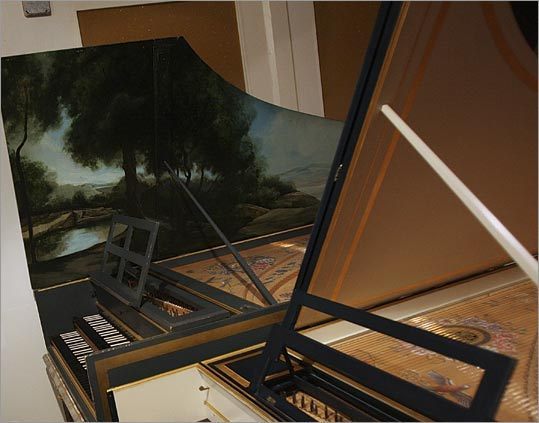 Recently used for the Boston Early Music Festival’s Jordan Hall concerts, this was Sykes’s first commission. He had worked with builder David Way, longtime president of Zuckermann Harpsichords. Way wouldn’t decorate an instrument until he heard it played. “Then he could decide the really good one would go to a musician, and another one to someone who had money, but maybe not as much discrimination,’’ Sykes explains. As such, this instrument arrived unfinished; Sykes hired friends to paint the lid and the stand. “It’s like a car: You grieve the first couple of scratches, but after that, you just give up. It looks pristine from 20 paces, but you get up close and you can see that it’s been moved around a bit.’’ 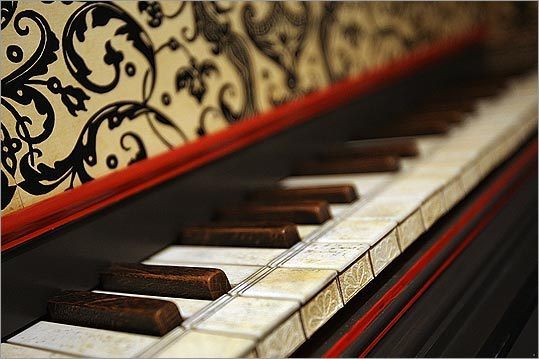 Sykes, then a graduate student, saw this instrument at the 1983 Boston Early Music Festival. “I sat down to play it, and five seconds later I said I have to have it,’’ he recalls. “I went to the bank and tried to get a loan, and they said, ‘We don’t give loans for harpsichords.’ If it was a speedboat, no problem!’’ It took six months to raise the money.

Based on a 17th-century Flemish virginal called a muselaar, its sound doesn’t carry far, but is beefy and rich up close. “It’s a big box, a lot of belly resonance. And the strings are being plucked almost in their dead center, which means a lot of amplitude.’’ Hyman died at 38; this was his last instrument. 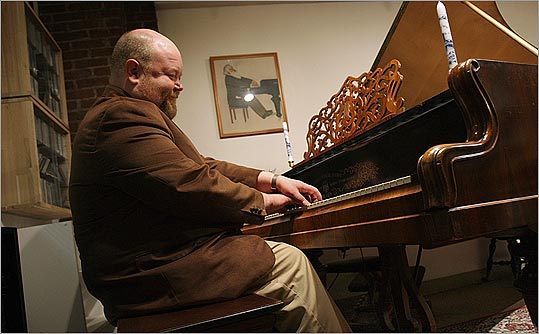 “This is the Brahms piano,’’ Sykes says of the only period instrument in his collection. “He owned a piano by the same maker, this same model - all that exists of it now, having been through the wars, is the music desk and one leg.’’ Sykes prizes it for chamber music. “Even though it’s a big sound, to me it sounds more like wood than like metal,’’ he says. “Streicher said that a piano should sound like a good woodwind.’’ 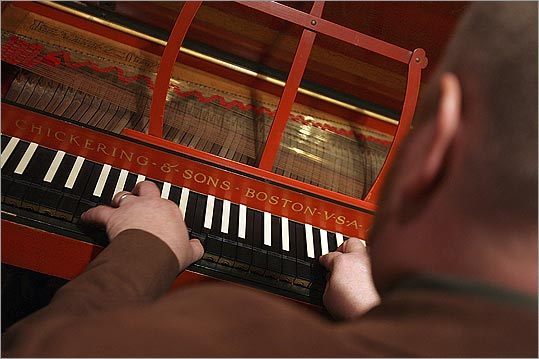 1908 CLAVICHORD BY CHICKERING AND SONS

On pianos, hammers hit strings; on the harpsichord, strings are plucked. But on the clavichord, strings are activated by small metal plates called tangents. “You need to say that I am the president of the Boston Clavichord Society,’’ Sykes announces. “That’s an important part of my mission, to let people know about the clavichord.’’ The sound is incredibly, expressively delicate. This particular instrument also has local history. “There was a division of the Chickering piano factory - which is still on Tremont Street, in the South End - and they hired an early-music pioneer of the time named Arnold Dolmetsch,’’ who designed early instrument reproductions for the company, until he was downsized during a financial panic. Many surviving Chickering-Dolmetsch instruments are in museums; one for sale at the 2007 Boston Early Music Festival carried a five-figure price tag. “I’m connected to the clavichord mafia,’’ Sykes confides, “so I got this one for a little less.’’